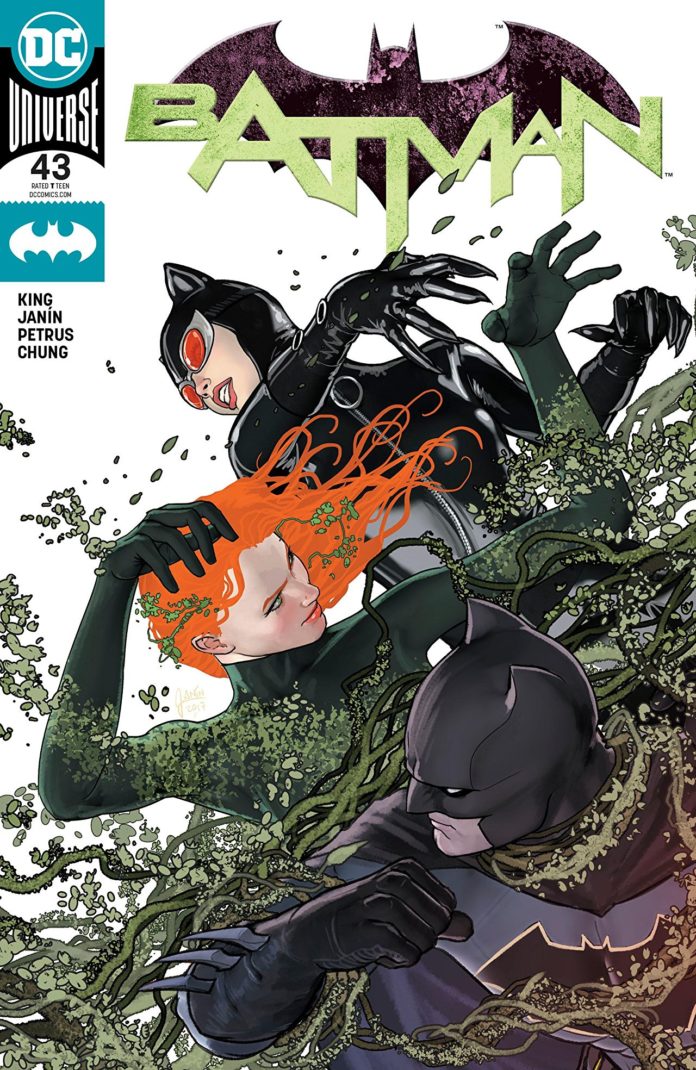 SYNOPSIS: “EVERYONE LOVES IVY” part three! The quest to end Ivy’s domination heads toward a close, but can Batman offer Ivy redemption on the other side of this crime? It’s an epic showdown between the Caped Crusader and one of his most popular foes, brought to you by the creative team behind “THE WAR OF JOKES AND RIDDLES.”

As nasty as the tactics and action in “The War of Jokes and Riddles” got, writer Tom King brought the weight of it home by capably communicating the emotional effects (and fallout) the battle had on Batman’s soul. We saw how it affected others, too, most notably Kite Man.

In this issue’s conclusion of “Everyone Loves Ivy,” King returns again to those dark days to demonstrate how they’ve driven Ivy to her current status at the horticultural queen of the world. After an outrageous plan involving getting punched full-on in the face by Superman lands Batman in the care of Dr. Harleen Quinzel, the pieces begin to fall into place for the unraveling of Ivy’s reign. Bruce communicates with Ivy via Harley as Selina speaks to her in person, with the women discussing the roles they played (or, in Selina’s case, didn’t) in the Joker/Riddler battle royale. Bruce’s talk with Ivy is one of kindness and understanding, as he reminds her that anyone can come back from anything if they want to.

But the guilt of the men Ivy killed for Edward Nygma weighs heavily on her. Luckily, Batman has a contingency for everything, and isn’t above using love as a weapon. And it isn’t even in a way that’s manipulative! He accomplishes his goal in a way that brings comfort to someone who needs it. Being engaged to Selina hasn’t dulled his strategic edge, nor has it changed his ability to get results. It’s the results themselves that aren’t as harsh as they used to be, and I love that.

Because no matter how big, how bizarre, or how bonkers Tom King’s concepts are, he always finds the heart that beats beneath it all. This has been true since his first pages on this title, and he’s only deepened this book’s emotional core as he’s gone along. There’s a little bit of action in this issue, but mostly it’s just conversations and revelations and interventions that are all as thrilling as any fisticuffs.

Mikel Janín does most of the pencils and inks for this issue, with Hugo Petrus filling in on a few pages with a style that honors Janín’s so ably that I wouldn’t have realized it was another artist if I hadn’t read Petrus’s name in the credits. Facial expressions do lots of heavy lifting with the dialogue here (that’s lovingly lettered by Clayton Cowles), and June Chung’s gorgeous colors make all of it pop off the page. (I really love the full page of Ivy faces as she ponders Bruce’s words.)

Love is the stuff that makes this issue tick. Bruce and Selina are such and exciting and sexy couple, with King keeping their partnership romantic, fresh, heartfelt, and fun. Weddings plans begin in earnest next issue, but how can this possibly go off without some kind of tragedy? I’m hoping it doesn’t, but I’m preparing for the worst. I want to see Batman and Catwoman live happily ever after. I think Tom King does, too, but as a writer who excels at challenging his characters, I don’t know if he can. – John Bierly