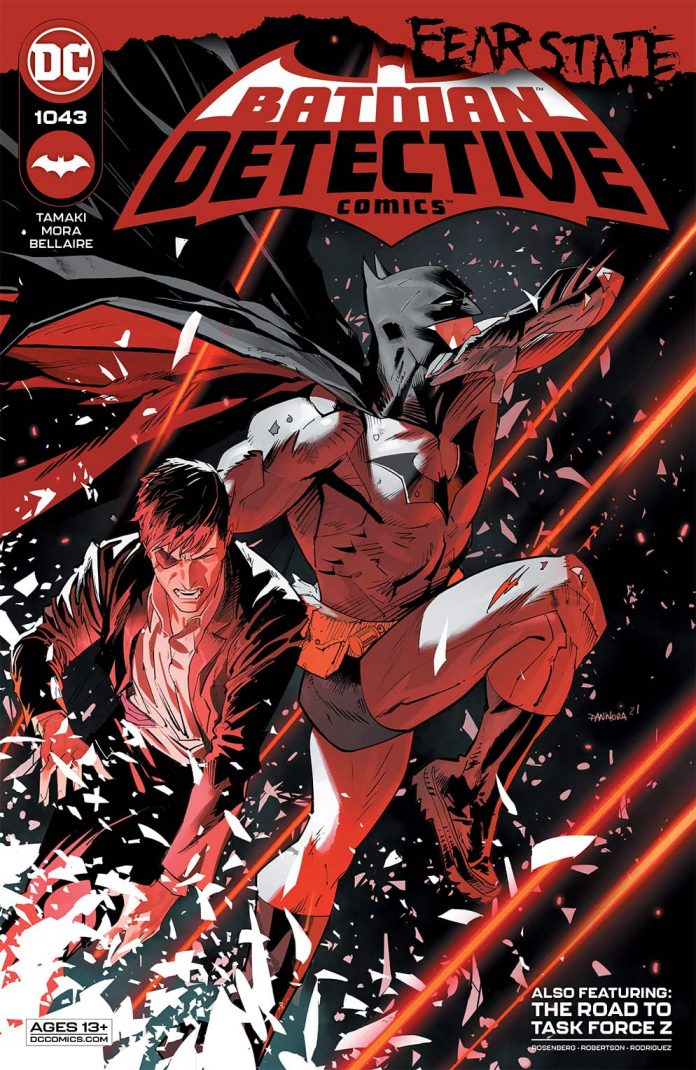 SYNOPSIS: Fear State grips Gotham City! When Mayor Nakano’s city hall office finds itself under siege, the only hero who can help the embattled local official is the man Nakano pledged to rid from Gotham: Batman. The top vigilante in the city must protect the man who’s fought so hard to put an end to masked heroes in an action-packed car chase that culminates in a shocking ending that’ll give readers nightmares. Backup: Wait, how did Red Hood end up in Deb Donovan’s apartment? And what the hell gives him the right to eat all her frosted cereal? As Gotham’s troubled son and the city’s toughest reporter set out to uncover the mystery of the missing A-Day corpses, they run into more answers than they bargained for culminating in a deadly shootout that renders Red Hood down for the count! Can Deb Donovan make it out alive to tell the tale of her harrowing adventure? And what will Red Hood’s capture mean for the Bat-Family? It all leads to next month’s terrifying new chapter in Gotham history: TASK FORCE Z! 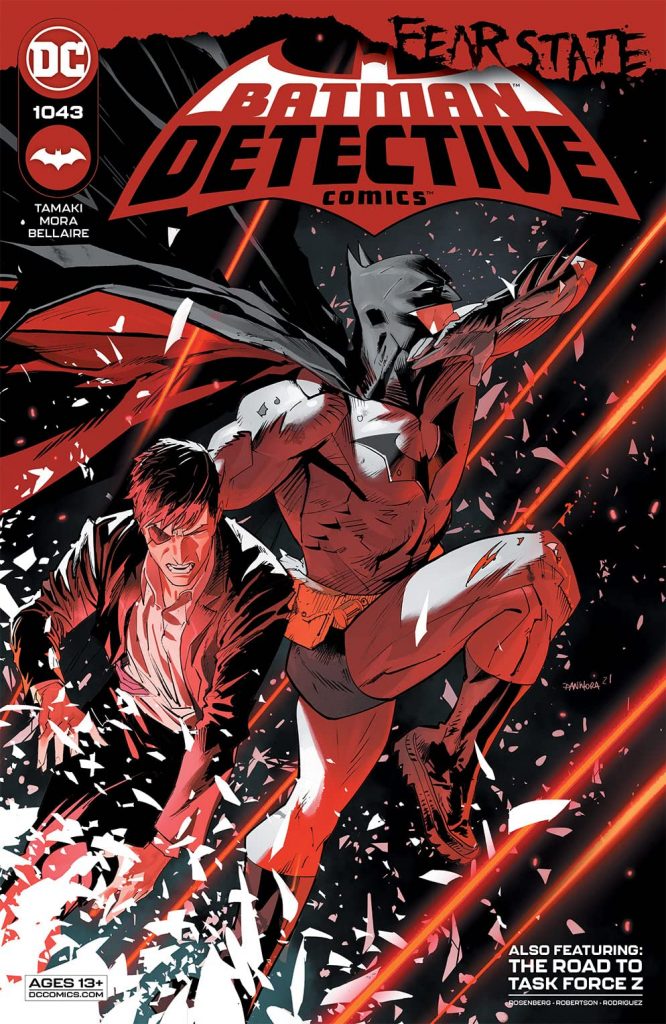 Detective Comics #1043 is the first new arc by Tamaki since taking over the title. This issue is also heavily investing in the latest character-centered crossover, James Tynion’s Fear State. Three great covers will give you plenty of options; I might have to give the edge to Kael Ngu for their Huntress wanted poster. One cannot forget that we also conclude the backup story featuring Deb Donavan and Red Hood. Now that is a lot for one issue—a new arc, a few variants, a cross over and a backup. Let’s get into it!

Tamaki is doubling down on this issue. This issue might be the most political issue of Detective Comics yet. Since his introduction, we have become familiar with Nakano and his level of righteousness. After this issue, the reader is left to believe that he “was” the last good person left in Gotham. You could joke that this issue is “Detective Comics Featuring Mayor Nakano” — he is very involved in both primary as well as the backup.

From page one, this was giving me hardcore Dynamite James Bond vibes. Mayor Nakano steals the book early on with not only his ability to sniff out BS, but he’s got the moves to stay alive in Gotham for the long haul. At times a political thriller Tamaki does a fantastic job setting up both sides, the last hope of Gotham in Nakano and the weasel that is Simon Saint and the Magistrate. The only gripe I can see readers having is that this does take what seems like a significant portion of the issue. I know I was on the edge of my seat waiting for the Batman to make his grand entrance. Then the Batman makes one of the most kick-ass entrances, just like in Jaws; it’s worth the wait.

Artist Dan Mora and colorist Jordie Bellaire complement each other so well in this book. Bellaire’s colors enhance Mora’s sharp art, attention to detail, and panel placement. Splash pages to panels; each page turn delivers something eyepopping. Mora’s action panels are fun regardless of Nakano or Batman, and Mora gets more and more creative with panels as the book goes on. This little extra flavor is what the last few books have been missing. It is great to see that return.

Alright, backup story, Red Hood and Deb Donovan.  This was a bonkers story from the get-go, and I must say one of the better backups around. I’ve grown to appreciate Donnavan and the amount of character she can add to a scene. These ten pages have a nice touch at the end of each issue, and it does its job and has me interested in Task Force Z.

Overall, another issue of Detective Comics I consider a must for your pull list this week. We all know how hard I can be on backup stories jacking up the price on books, and I must say Detective never disappoints. I am interested in seeing how Tamaki handles writing in this Tynion crossover event, and I’m sure she did not plan for it. No one writes better endings than Tamaki right now. The best Batman book for sale is this title every month.

It hits all notes that will leave all Batman fans and comic book fans with an ear-to-ear grin. – Peter Verra