SYNOPSIS: Ding ding ding! Let the tournament begin! The most ruthless fighters in the DCU compete for the ultimate prize: eternal life. To win his first round, Damian Wayne faces two times the danger and two times the trouble: it’s Ravager and Flatline versus Robin! 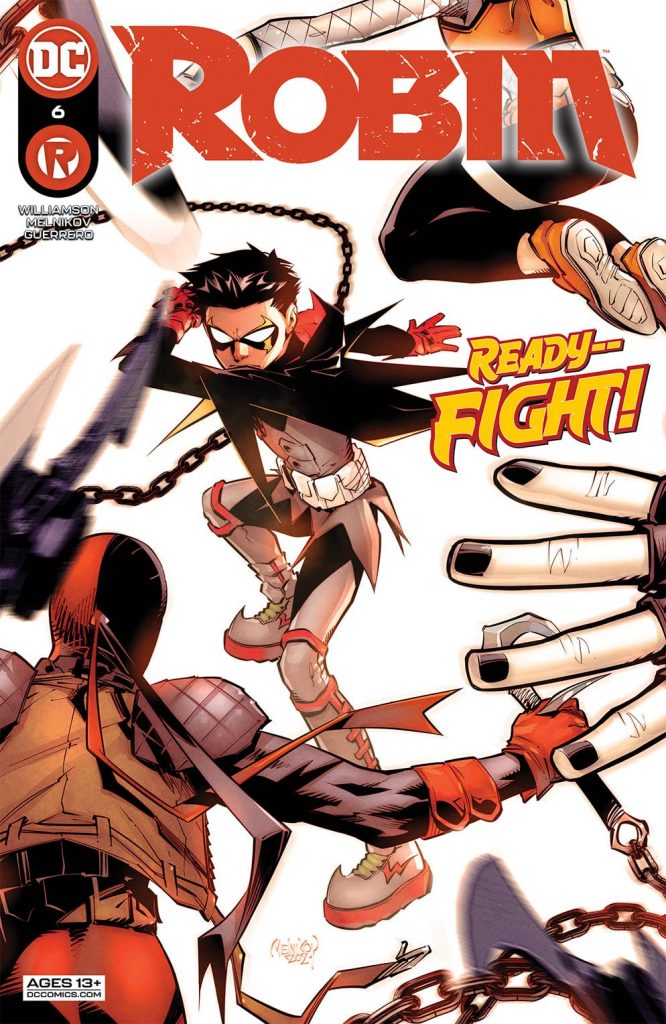 Last issue brought a newfound self-assuredness to Damian Wayne and he’s going to need it as the tournament is finally underway!

Williamson gets right to it with Round One, letting Melnikov cut loose with a montage of all the fights at once, making clever use of the nine-panel grid by extending it out over a double-page spread and using bones as panel borders, containing the chaos. If you were a reader hoping for a more detailed blow-by-blow account of the fights, you might come off as disappointed in the opening two rounds as Williamson burns through them quickly. The focus remains on Damian and to be honest, I’m okay with that. I don’t need to see who Tengu beat to get to Round Two. My interests lay with Robin, Hawke, Ravager, and Flatline.

Speaking of the apprentice to Lord Death Man, we get some insight into her origin when she returns Damian’s manga to him. I took Lord Death Man’s aversion to manga as a nod to his comic book origins and while Williamson fills us in on some of Flatline’s beginnings, she still retains an air of mystery about her. It’s also worth noting that the ghost of Alfred has taken a liking to her, of which I assume Damian is developing feelings about her as well.

I was sad to see Jiro make an appearance. Not that I don’t like the member from Batman: Incorporated (that’s still in continuity, right?), but I was sorry to see him as a stepping stone for Respawn to advance his way through. At least it taught Damian something valuable about his future opponent.

We then move to Round Three, which leaves us with an Elite Eight in this tournament. Of course, the characters we care about are all pitted against someone we’re not as attached to, so when this round is over you can guarantee some hard choices are going to have to be made when it comes time for the killing.

Robin’s true motives are still being kept close to the laced tunic, if you will, but after bonding somewhat (for Damian) with Flatline, Ravager, and Hawke over these issues, can he quite literally eliminate them? While he has killed and been a dark character, he has been growing a lot since Morrison created him and I’m looking forward to how Williamson plays with his dilemma. Of course, it seems the young detective may have sussed out who Mother Soul really is, but that’s a revelation for another time. Much like his father, I appreciated how Damian manipulated things to get his hands on her mysterious book and try to interpret its secrets.

Melnikov is such a treasure in this book. Action, emotions, layouts-the man makes this title a joy to read. He’s got the unenviable job of making the fighting and death brutal, but still within the limits of acceptability for a title like this. Of course, the sound effects help out in making the hidden elements more gruesome than they are, but the staging and choreography is all him! His inventiveness and style is an integral part to my enjoyment of this book!

While this issue didn’t reach the emotional highs and perfection of the last, it’s still worth your while. Williamson did a fine job balancing the personal moments with the action beats and Melnikov is a perfect partner in crime for him. We’re really getting some forward momentum here and I am enjoying the ride! – Javier E. Trujillo

RED HOOD AND THE OUTLAWS #39 Review by Javier Trujillo