SYNOPSIS: The legendary story of Batman and Robin has reached nearly mythic proportions: the crime-fighting Dynamic Duo, always one step ahead of the criminals they pursue and never meeting a case too big. This isn’t that story. This is the story of a young Dick Grayson, newly orphaned, struggling to find his way in a strange, difficult, dark new world…This is the story of Robin and Batman. The bestselling creative team behind the Eisner-winning Descender, Jeff Lemire and Dustin Nguyen, reunite in Gotham City to tell the story of a remarkable young man learning to navigate an incredible new world! 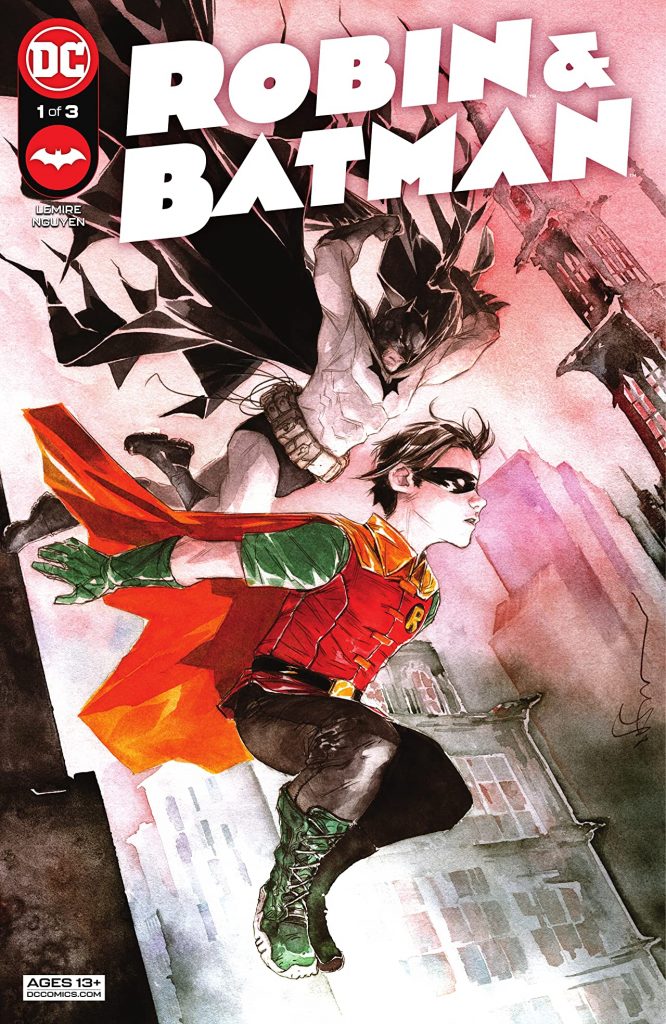 Jeff Lemire and Dustin Nguyen are a superstar creative team in comics, and they’ve set their sights on Gotham City for the 3-issue miniseries ROBIN AND BATMAN. This book opens during the very early days of Dick Grayson’s crime-fighting career, with the concept of “Robin” still in development. The almost-Boy Wonder is being sent in on trial missions as part of his training under Batman, but the synergy between the pair leaves a bit to be desired. In short, Dick believes himself to be ready for nightly patrols with The Dark Knight, while Bruce isn’t yet convinced. The pair find themselves at odds for most of this debut chapter, while stumbling upon a string of robberies that lead to an early encounter with a known Gotham rogue. Does Batman’s new protege share a secret history with Gotham City’s newest criminal?

Issue #1 was an effective first act: we get some good time spent with our main characters, as well as a firm grip on their motivations. The extra page count gives it more of a chance to breathe than the average monthly comic, while not overstaying its welcome. The biggest potential detractor here is the sheer amount of angst. There’s some poignant insight into Grayson’s mental state, which makes perfect sense: he’s a child who’s experienced horrific tragedy and is attempting to dive full-throttle into this new adventure before his past gets a chance to catch up with him. That’s some heavy emotional content in itself, but what doesn’t help matters is the book’s two protagonists being constantly at odds with one another. In that sense, ROBIN AND BATMAN suffers from a problem we see frequently in modern era Dynamic Duo stories: trying so hard to drive home believability that we lose any aspect of fun.

It makes sense: the very concept of “Batman and Robin” comes from a distant era where audiences were less sophisticated and suspension of disbelief got creators much more leeway. Today, readers can get behind the idea of Bruce Wayne, a man who has devoted his entire life to training himself to fight evil and criminality in his city — but the idea of him bringing a child into this mission with real life-or-death stakes can be a harder sell. This ultimately leads to Batman being written as a hyper-strict dictator-type, and Robin a naturally boundary-pushing rebel. While it’s easy to see how we got here, what’s not as easy is seeing why Bruce ever thought this might be a good idea in the first place. This is the crucial element that writers seem to forget — even though Batman has to be almost impossibly demanding of a young partner simply to keep them alive, he wouldn’t even bother with it if he didn’t see some kind of benefit coming out of it. It stands to reason that writer Lemire plans to shed more light on that side of things, but so far, it’s the biggest thing missing from this story.

Whatever pitfalls this story might have, it’s still gorgeous to look at. That is, of course, thanks to the instantly recognizable, lovingly hand-painted art from Nguyen. Dustin’s art walks a mysterious line between simplicity and sophistication, adapting to get the maximum impact out of each panel. The artist has only become more confident in his skills since his first Batman comics more than 15 years ago, and no Batman reader should be unfamiliar with his elegant, timeless style.

It is significant that Lemire and Nguyen would take time between their creator-owned projects to craft a tale of Gotham City. While the ultimate direction of this team’s stay here might remain to be seen, they clearly wouldn’t be here if they didn’t have something worthwhile to say, and it will be exciting to see that unfold. – Bobby Barrett

BATMAN: MASK OF THE PHANTASM Getting Theatrical Release