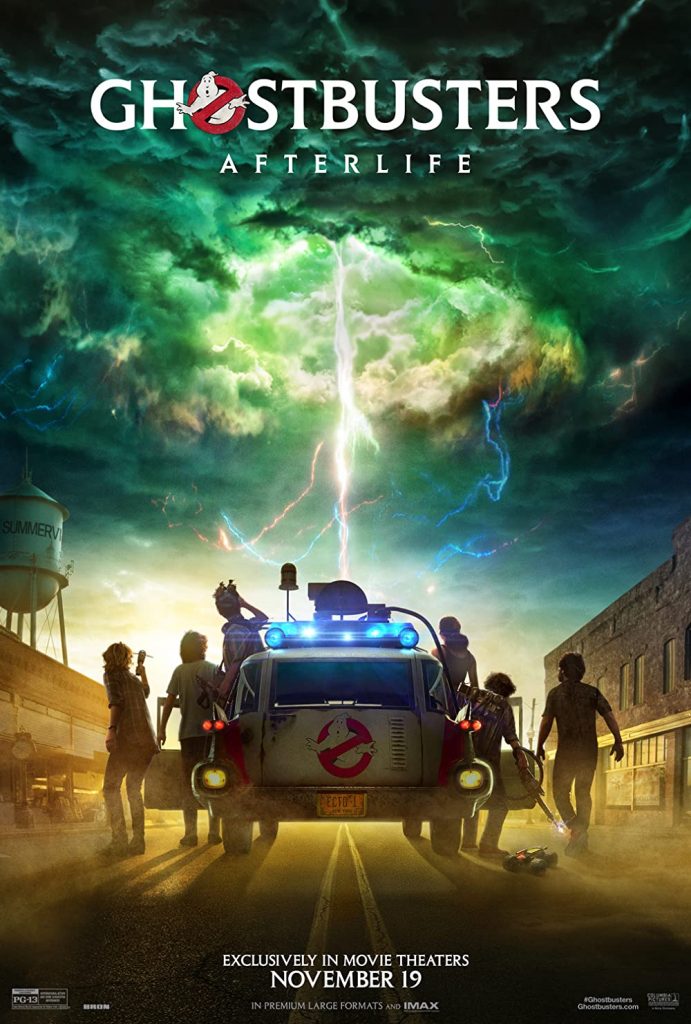 If you’re one of the 10 people alive who hasn’t seen the original Ghostbusters film from 1984, you might want to stream it before seeing Ghostbusters: Afterlife. Not that you won’t “get” it as a stand-alone film, but you’ll appreciate it much more as a sequel if you’ve seen the original. The film is dedicated to the late Harold Ramis whose character Egon Spengler inspires the story.

The press screening began with a message from director Jason Reitman asking that reviewers not reveal any of the many surprises, so I’ll do my best not to do that. I’ll focus more on the characters and their performances.

As far as the plot, a single mother, Callie Spengler (Carrie Coon), daughter of Egon Spengler, finds herself broke and desperate when she learns that the father she never knew has left her property in his will. She informs her two children, Trevor (Finn Wolfhard) and Phoebe (McKenna Grace), that they’ll be traveling to Somerville, Oklahoma, to take possession of their grandfather’s farm. When they arrive, the realtor, Janine Melnitz (Annie Potts), tells them that what they’ve mainly been left is a pile of debts.

Somerville is in the middle of nowhere, and the locals called Spengler the Dirt Farmer because that’s mainly what you’ll find at his homestead. He’s regarded as the local crazy guy, and when the family arrives at his farm, they discover a run-down property with buildings that are falling in. However, having no money or anywhere else to go, they try to make the best of it.

In town, Finn finds himself crushing on the sheriff’s daughter, Lucky (Celeste O’Conner), and decides to try to impress her. Phoebe, on the other hand, is used to being alone. She’s a very intelligent, but eccentric, girl who lacks people skills. Luckily, she meets a fellow nerd (Logan Kim), who goes by the nickname Podcast because that’s what he does. He has a podcast that explores the supernatural and all the oddities surrounding Somerville and the area around it.

Paul Rudd plays summer school teacher, Mr. Grooberson, who’s really a seismologist studying the earthquakes in this area that has no fault lines, no volcanic activity, and no fracking. He manages to pique Phoebe’s interest in the number of abnormalities surrounding her new home.

Gradually, Phoebe and Trevor begin to discover the legacy their grandfather left behind, and their relationship to the Ghostbusters — now the stuff of urban legend — who saved New York City from a supernatural onslaught in 1984. Phoebe dives into research about him and his role in the storied event and becomes convinced that Somerville is in for a similar supernatural threat.

The kids carry this film — especially McKenna Grace. The adults are really kind of peripheral. Paul Rudd is excellent, as usual, but he really doesn’t have that much to do. The same is true of Carrie Coon, but she excels at understated dry wit. Finn Wolfhard does quite well, but he, like everyone else, is outshone by McKenna Grace. She is called on to do so much physical acting, as well as doing a fine job developing her character, that I found her performance to be the most outstanding of the film.

My one complaint about Ghostbusters: Afterlife is its slow start. I had a hard time feeling involved during the first half, but the second half captured me and kept me engaged until the end. – Jo Anne Hyde