SYNOPSIS: Mayor Mayhem’s grip over Gotham tightens as he enacts a plan that puts Barbara Gordon at the center of a political scandal! Batman, Nightwing, and Robin leap into action to expose Mayfield’s plans for Gotham and break his hypnotic hold over the city before the polls close. But when all roads lead to Arkham, can the Bat-Family take down all of the city’s costumed criminals?! 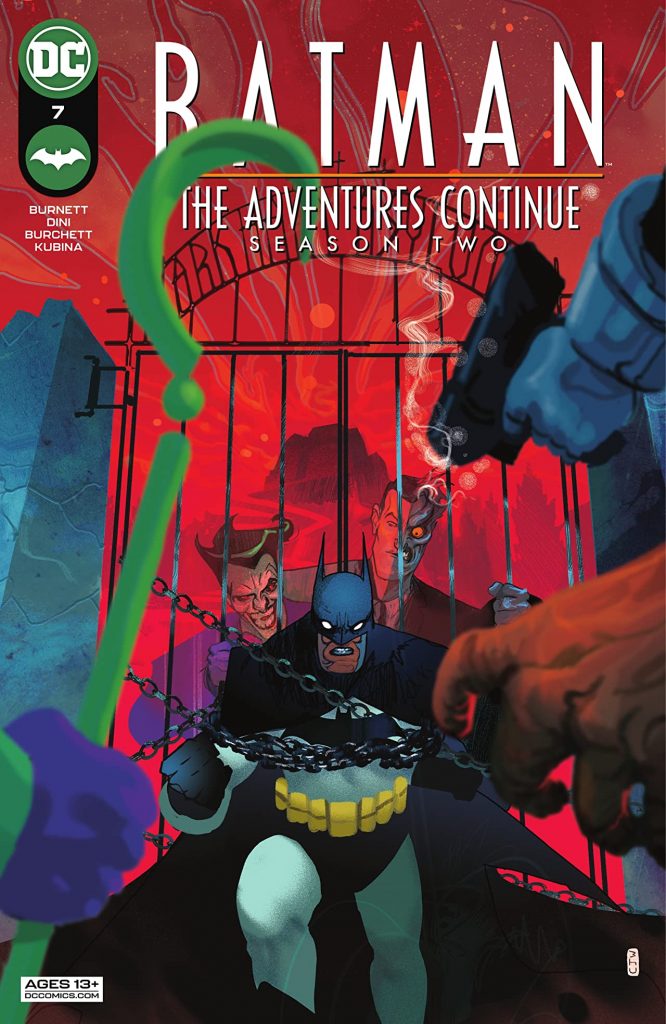 As Batman and Robin put all the pieces together, Gotham goes out to vote! Burnett and Dini have been building to this story all “season” and it’s fitting that so many Bat characters, both hero and villain, are here at its culmination. Having local politics and crime mixing together in this arc feels very much in step with not only Batman: The Animated Series, but the 1970s comics that inspired it.

Not content to let his fate rest with the citizens of Gotham, Mayfield has enlisted the inmates of Arkham to defeat The Batman. His promise? To shutter Arkham and grant them all pardons! When The Joker knows how insane something is, you know it’s absurd! As a big finale, I wish the fisticuffs could have gone on for just a bit more. Also, it would’ve been appreciated if Barbara could have had more of a hand in taking down Mayfield, given how she was under his and Hatter’s thrall during this storyline.

I’m still not as taken with Burchett’s art on this issue. Maybe it’s something being lost in translation in the copy we’re provided to review, but it just feels slightly rushed to me, a little loose and unfinished. Everyone looks like they should, keeping up with Timm’s designs, but it’s not as polished to my eye as some of his past efforts.

Overall, I felt this season was much stronger than the one that preceded it and liked the mixtures of stories we got. While it seems like this is it, I hope Burnett and Dini come back soon for a season 3! This has been a fun ride and I appreciate how it pushed the continuity of this universe forward, adapting concepts from the comics with a B:TAS spin! – Javier E. Trujillo

INTERVIEW: Michael Uslan, Part 4: The Genius of Christopher Nolan by...