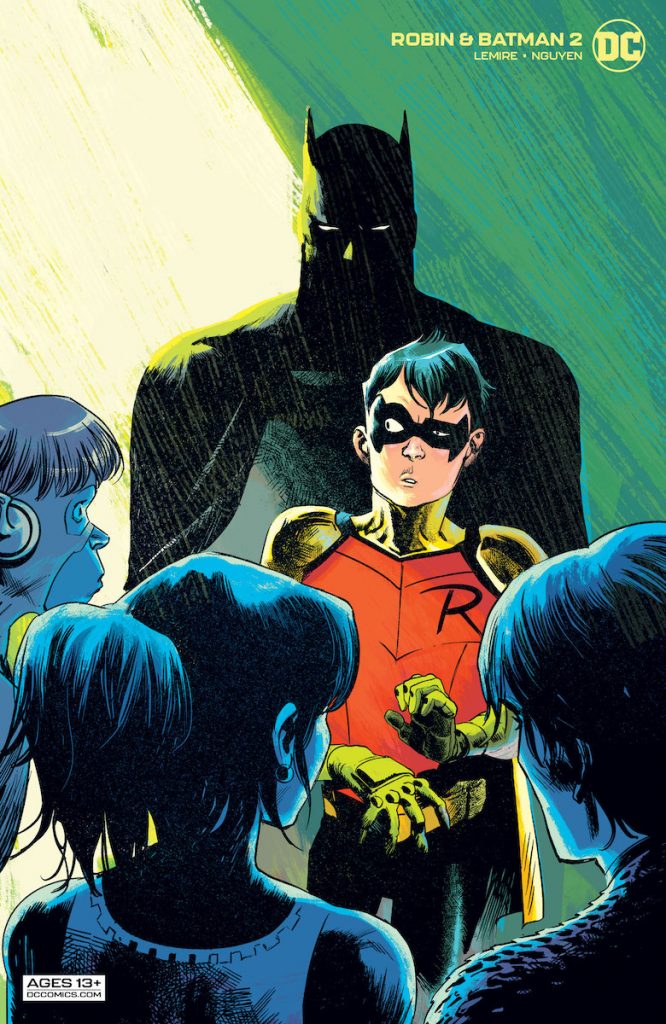 It’s Dick Grayson’s birthday, and the young orphan may have had a rough day at his new school, but some warm encouragement from Alfred Pennyworth seems to send things in a more positive direction — but that’s nothing compared to what his new guardian has in store for him! No sooner is Dick donning his official Robin suit for the first time, he’s whisked into outer space for a visit to the Justice League Watchtower! From brawling in the school cafeteria to shaking hands with Earth’s greatest heroes, things are looking up for our Boy Wonder. And what happens when he’s left alone with the rest of the League’s junior associates? I smell a team-up…

The middle chapter of ROBIN & BATMAN offers a more pleasant read than its predecessor and makes full use of its extended page count to deliver a story that can move from being raw and intimate to epic and thrilling. There are, however, some elements that clash with this writer’s personal views on Batman and Robin. Firstly, we have Dick just barely putting on the Robin suit for the first time and his first mission is to go into space and meet the JLA? Secondly, Robin is shown to be just the newest of several young sidekicks connected to the League? These are things that longtime Bat readers might find jarring, but taken as its own standalone tale, ROBIN & BATMAN is still enjoyable.

Jeff Lemire does an admirable job getting inside young Grayson’s head as he balances the anguish of a kid still reeling from devastating loss with the childlike wonder of a boy experiencing the incredible reality of superheroes existing. Lemire’s Alfred is also a highlight, always being reliable for nuggets of sympathetic wisdom or dry wit. In a world where Bruce Wayne’s surrogate father no longer graces the mainstream comic pages, his is a most welcome inclusion.

Lemire is still at his most awkward when writing Bruce Wayne. Though not shown as completely callous (ala Frank Miller), there’s still enough of the darkly cynical Batman here to darken what would be the innocence of a book like this. Not to say that this story shouldn’t have darkness to it, but when our “hero” is providing more of it than any villain shown, it can make one wonder how much the author really “gets” The Caped Crusader. Of course, the wrap-up next issue will factor in determining Lemire’s take on Batman, definitely hoping for the best.

Visually, Dustin Nguyen executes turns in gorgeous pages, as expected. While I do somewhat miss the rich inks from the artist’s former partner Derek Fridolfs, Nguyen’s art takes on a more “delicate” sensibility on its own, and the artist’s watercolor finishes only serve to enhance that. Dustin Nguyen’s art is a singular vision that stands apart from the traditional superhero style, which makes it a relief not only to behold but that DC financed it to begin with.

Ultimately, ROBIN & BATMAN is strong enough to withstand some character misgivings, especially being beautiful to look at as it is. We’ll see next month how this superstar comics team does with the finale, here’s hoping the final issue ties everything together nicely. – Bobby Barrett