DECEMBER (1951)/JANUARY: Two-Face is back – well, one who isn’t Harvey Dent – in BATMAN #68. While playing Harvey Dent in a bio-flick, actor Paul Sloan has real acid thrown on his face and decides to take up crime as the new Two-Face.

FEBRUARY: The classic Joker story “The Joker’s Millions” was included in DETECTIVE COMICS#180.

This story would inspire an episode of THE NEW ADVENTURES OF BATMAN titled “Joker’s Millions.” MAY/JUNE: Batman and Superman meet for the very first time in comics (they had previously been team-up on the Superman radio show) in SUPERMAN #76.

JUNE: Firefly makes his debut in DETECTIVE COMICS #184. The character’s original incarnation depicted him not as a pyromaniac, but possessing a belt that projected color lights.

AUGUST: A “Flying Batcave” is introduced after Batman promises not to set his feet in Gotham City for one week in DETECTIVE COMICS #186. 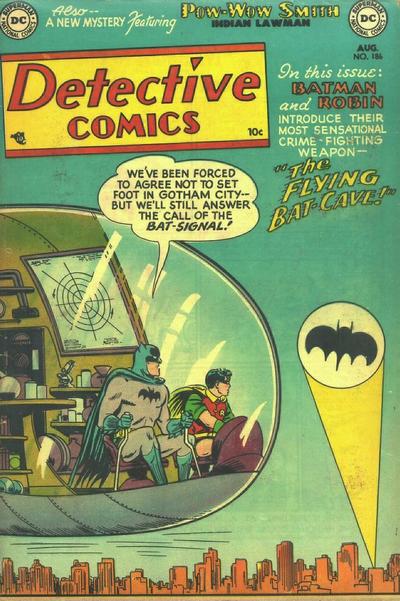 AUGUST/SEPTEMBER: After being shipwrecked, Batman becomes “Jungle Batman” in BATMAN #72.

SEPTEMBER: Yet another Two-Face shows up in the pages of DETECTIVE COMICS #187. This time, he’s theater manager George Blank who used paint to mimic the original Two-Face’s scars – albeit on the wrong side of his face.

OCTOBER/NOVEMBER: In the BATMAN #75 story “The Joker’s Utility Belt,” The Joker gets his own, well, utility belt.

This story would later be the basis for the 60’s BATMAN TV series episodes, “The Joker is Wild/Batman Gets Riled.”

THE BATMAN is Heading to Chicago