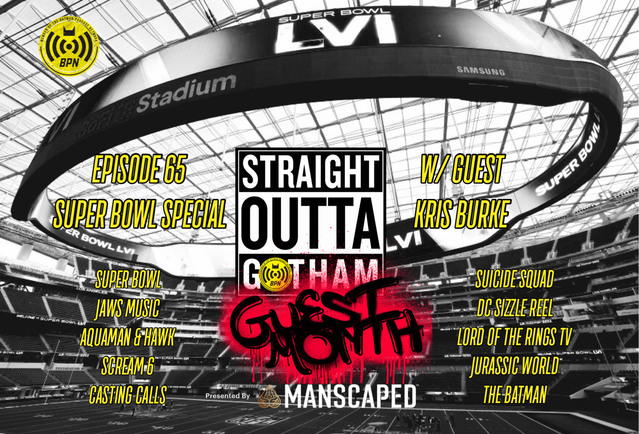 The guys continue guest month on this Super Bowl Show with fellow Batman-On-Film.com contributors and football writers for the Green Bay Packers from SB Nation, Kris Burke! Kris gives us his take on what’s going to happen with Aaron Rodgers this summer and joins Pete and Eric in giving their favorite Super Bowl dishes and making their picks for Super Bowl LVI!

And in case you’re thinking “These guys have gone jock on us!” don’t worry. They have their usual pop culture news breakdown including bits on Spielberg’s initial take on the Jaws theme, Alan Ritchson’s short time as Aquaman, Scream 6 being greenlit, Will Smith’s “Ayer Cut” hopes, the new Jurassic World trailer, LOTR‘s Super Bowl commercial, the DC Sizzle Reel for 2022, and of course more news about The Batman!

It’s their longest show to date, but it’s worth every second!!