Welcome to another “holiday” edition of the Batman On Film Mailbag!  Thanks for all the questions, keep ’em coming, and let’s get to it!

@BATMANONFILM @shewrick @smb_ryan @J_Rocka probably too late for the #BOFMailbag but need advice. My lovely wife convinced me to purchase JL for us to watch tonight (last time we saw this was once in theaters). My question is…👏is👏this👏grounds👏for👏divorce👏? 😉 Jk

JETT SAYS: Tell her you would rather watch THE NOTEBOOK.

Can you share with us as to why the Snyder JUSTICE LEAGUE cut was unwatchable? The story of the theatrical cut is pretty simple and to the point, but visually with the re-shoots and poor CGI it is barely watchable. If the Snyder version visually was like BATMAN v SUPERMAN, I would think visually the Snyder JL would be better. Story wise, obviously I have no clue.

JETT SAYS: I can’t get into details about this for obvious reasons.  All I can say is that there was a reason why the film was changed drastically.  As I’ve said many times, I think it’s damn near a miracle that they got to — as you say — “barley watchable.”  Take that for what you will.

@BATMANONFILM What advice would you give Warner Bros about their (current and upcoming) super hero TV shows? #BatmanOnFilmMailbag

What is the next DC animation [movie] you are looking forward to? Also, should they continue being standalone or should some tie-in the movies?

JETT SAYS: I’m “curious,” if you will, about this BATMAN NINJA movie.  Other than that, I hope to see more animated Batman films done like GOTHAM BY GASLIGHT (i.e. not a straight-up adaptation, more “inspired by”).  I’m actually a big fan of most of the animated DC Films, Batman included (he usually is) or not.

Will we ever get a JUSTICE LEAGUE commentary podcast where you guys pick out the Whedon/Snyder scenes? I’ve watched it enough where I can tell the difference.

JETT SAYS: That would mean I’d have to watch it again sir.  I already have to watch it this weekend because WB sent me a reviewing copy dammit!  On a (more) serious note, that’s something that’s up Ryan Hoss and Justin Kowalski’s alley.  I’ll pass the idea along to them. 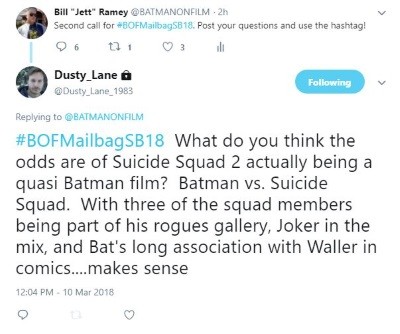 With the news that Kristen Wiig is portraying Cheetah, what storylines do you hope they draw from for the film?

JETT SAYS: It’ll interesting to see what version of the Cheetah they go with.  I’d personally go back to the Golden Age Priscilla Rich version of the character.  We’ll see.

Good Morning.  I’ve been seeing on Twitter your displeasure about potential cameos, and after credit scenes in future DC  films.  If new leadership is coming in, Walter Hamada,  wouldn’t he have the clout to put an end to the cameo, and after-credit nonsense? If he doesn’t have this clout, is he just a figure head who takes the fan boy bashing while others run things behind the scenes?  Last question, when should I be concerned about not hearing anything about the next Batman film? I understand he’s currently writing away, and I’d rather have a great film, then rushed film, but I’m just nervous about Reeves potentially exiting. It would be beyond devastating to lose a 2nd great director from a new film. Thanks again, and keep up the good work.

JETT SAYS: In terms of your first question, I’d say that if Mr. Hamada thinks the cameos and post-credits scenes are a good thing, they’ll continue.  If not — and if he thinks the solo films need to focus on themselves, not world-building — then they’ll stop.

As far as your second question, there’s nothing to be concerned about.  Keep in mind that while he signed on about a year ago, he’s only been working on it since late last year.  I think all’s OK…right now.  I do agree that Reeves bailing on the project would be a damn disaster — for both Batman and DC on film.

Do you have any idea what is the big shocking news @johncampea hinted about some days ago, and if you so, do you agree with him? #BOFMailbagSB18

JETT SAYS: I have NO idea, really.  I’m a fan of Mr. Campea, but he should’ve revealed the info or not said anything at all.  We’ll see I guess.

Aparo or Breyfogle? I’ve been reading some 70’s and 80’s Bat classics!

JETT SAYS: Oh man, that’s tough!  If I had to choose, I’d go with Breyfogle.

Who would you hold the most responsible for Batman’s portrayal in JUSTICE LEAGUE: Whedon, Snyder, or Affleck?

JETT SAYS: In terms of how Batman was portrayed in the film, that’s probably on Zack Snyder and screenwriter Chris Terrio.  As far as the performance, that’s totally on Ben Affleck.  While I don’t like BATMAN v SUPERMAN, I thought his performance in that film was very good.  He’s borderline awful in JL.

Jett do you think if the delayed the movie to either March or April to fix the cgi and script that it would have made a major difference? Or was it more about getting out there to be done with t?

JETT SAYS: Nah.  They knew what they had on their hands man.  Moving it from Fall ’17 to Spring ’18 would’ve just postponed the inevitable dude.  They just ripped the band-aide off instead of removing it slowly.

If Warner Bros. gets sold and the DC properties get sold separately, what studio would you like to see them go to? Part of me leans towards Universal.

JETT SAYS: I believe that if Time-Warner sold off their companies, DC would go wherever Warner Bros. Pictures would end up.  Thus, DC and WB would still be attached at the hip.  I just wouldn’t want them to be bought by Disney.

#BOFMailbagSB18– if you answered this question before, my apologies. Do you think Danny Elfman was the right choice to score “ Justice League “? As much as I loved hearing the Batman 89 theme , it felt out of place to me ( as well as Superman’s).

JETT SAYS: Joss Whedon and Warner Bros. brought in Danny Eflman to compose a new score hoping it would help change the tone of the film.  It was a big deal when it happened and I was surprised that a lot of fans shrugged it off as a nothing burger.  With that said, the score was rather bland and the BATMAN ’89 and SUPERMAN: THE MOVIE riffs were cool, but clearly pandering to fans to invoke a sense of nostalgia.