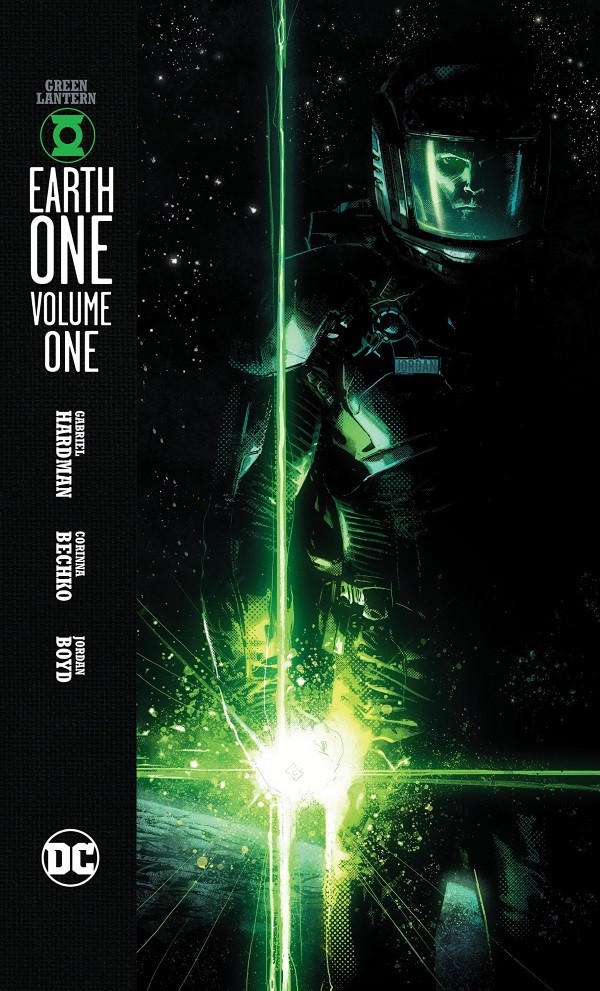 In space no one hear you GREEN.

I know, I am sorry for the terrible pun. But the first 12 pages of GREEN LANTERN: EARTH ONE gave me a strong Ridley Scott vibe. The graphic novel plays like classic sci-fi in it’s opening pages. It is truly a blackest night. It is quiet. The soundtrack that would fill my head dropped out in this book. I pulled out my ear buds and just listened to the quiet of night. That is the score the first 30 odd pages of this book needed. Just the echo of the words and the visuals burning my eyes.

Husband and wife creative team Corinna Bechko and Gabriel Hardman have crafted the finest of the DC Comics EARTH ONE offerings in my opinion. Where Superman and Batman had lackluster opponents on their EARTH ONE outings, Green Lantern truly faces an encounter that challenges the concept of what a Lantern is, while at the same time not just “making something different” because of the concept of the EARTH ONE books. The familiarity of the characters makes the spin on the idea presented fresh.

The Green Lantern saga has always had a sci-fi slant to it, but only as a backseat. This graphic novel is rooted in it. Everything that you love about space adventure is present here. Alien encounters. Alien friendship. Alien misunderstanding. I know it may sound like a bag of tropes, but it is not. These concepts are handled with finesse. We never visit Earth throughout the entirety of the book, save for flashback, and that is only for a handful of pages. This is a space book. Which makes sense considering the pedigree of our author and artist.

In GREEN LANTERN: EARTH ONE we are introduced to a Harold (Hal) Jordan who is less Han Solo than he is usually portrayed. He has been off Earth for a good while and seems to not have any real direction in a post NASA world. He is less devil may care and more stubborn space miner who seems to be paying a penance for something he may or may not have had control in. I miss the hotshot Hal Jordan, but I can appreciate what the creative team was going for here. Hal is not a reluctant hero, but maybe a potential hero who needed a push. The ring takes him on an adventure which puts him on the heroic path. He see’s who he is, not by relying on the ring mind you. But being brought into situations where his heroism can be activated. We don’t get the fully formed Jordan here. Which is good. You definitely want to see where this story develops past this inaugural edition.

In traditional Green Lantern lore, the ring will choose a lantern to be a successor when it’s previous wearer has met their end through service to the Corps. In this iteration that is not the case, the rings are actually scattered and stagnant across the universe. If you happen upon one, it is yours. So you really are in a situation of whatever the wearer wants to do with it. Just like any weapon, it is up to them. Of course Jordan is noble and he comes across others who share his views on “do-gooding.” But there are few Lanterns of questionable actions floating around.

There are cameo’s galore in the book. We get our big pal Kilowog, but the rest I will not spoil. I will say most of the characters you are looking for are abound. There is one that made me really miss them in the current, in continuity books, rhymes with PUH-LEEZA! Ok fine, I may have spoiled that. But even with the cameos, it does not distract from this being a story about Hal Jordan.

If I had a criticism, it’s that the Lanterns looked too much like what we have seen before. The Lanterns from the 2011 film had a real alien feel to them. I think that would have been the right way to go here. One of the concepts to push in EARTH ONE, is re-imagining what we already know. I wish we could have got something new here. But that is one nitpick in an entire book of greatness.

The entire point of these EARTH ONE ventures was to give people a great self contained story they can get in and out of. A bit of familiarity, mixed in with unique takes.

Again Bechko and Hardman have done something really exciting with this take. Their time on PLANET OF THE APES and STAR WARS books set them up well to explore the world of Green Lantern.

I hope they “will” return for Volume 2. – Justin Kowalski

GREEN LANTERN: EARTH ONE which will be released on Wednesday, March 14, 2018!  BUY IT NOW!