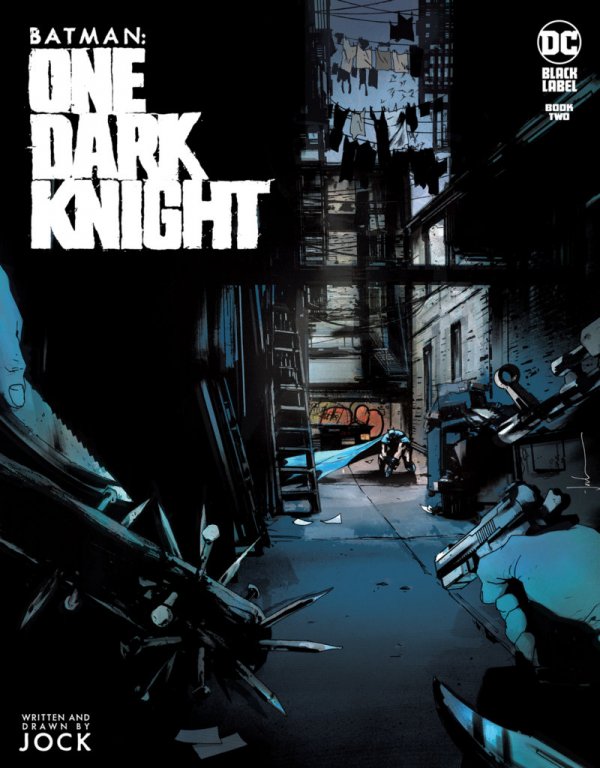 SYNOPSIS: With the power out across Gotham, Batman must haul the not-particularly-cooperative villain responsible, E.M.P., across miles of chaotic city streets, filled with terrified people and opportunistic criminals! Blackgate Prison can nullify E.M.P.’s destructive electrical powers, if Batman can survive long enough to get them there-but what happens if there are two people loose in Gotham with those powers? What then? The mega-talented Jock (Batman: The Black Mirror, The Batman Who Laughs) writes and draws the blockbuster story of Batman’s worst night!

Jock returns to Gotham and one of the most challenging nights in the Dark Knight’s life!

With ALL of Gotham’s criminal element against him (and maybe some of law enforcement, too…) The Batman is just trying to make it to his destination with a sedated E.M.P. in tow. Jock escalates the suspense by furthering Batman’s disadvantage. Not only has the blackout rendered technology useless, but E.M.P. is subtly affecting Batman’s physiology as well, making it difficult to be at the peak level he needs to be.

As trouble mounts on all sides, the GCPD is up against the wall, too, trying to contain the chaos. Montoya finds herself in a deadly situation, with help not coming from whom it should. Jock ups the tension even further by adding another complication to his story, as not everyone who should be working for the greater good is benevolent about it. Ulterior motives that are hinted at in the last chapter continue their slow revelation here.

Once such reveal involves a young boy named Brody, who just so happens to have a connection to E.M.P. He further develops what we know about the new villain, bringing a layer of humanity and regret that caught me by surprise. This is a high-octane story, but Jock makes sure that it’s not all about flashy art. There’s a vulnerability present, along with stakes for all involved.

With Gotham now drenched in darkness, Jock continues to utilize the blue color palette he employed at the close of the last issue. This effectively blends with the Dark Knight well enough, but not in a way that readers are unable to discern what is going on. With the color being close to that of Batman’s own costume it helps the night feel like one of the few advantages he has during this hellish trek. It also allows for some spooky silhouettes as the Caped Crusader fights and intimidates his way across town.

If you like Jock’s style as much as I do, you’ll find a lot to drool over. He takes advantage of a two-page spread twice, using the generous page real estate to create some interesting visuals. He makes things feel epic and confined at the same time as Gotham falls to pieces around her savior.

The only downside to this story is the wait between installments. The teaser at the end states the conclusion will be due in June of 2022, but this very issue was slated for February and barely made a March release. With a generous page count, I’m sure Jock will have the room to fit in a satisfying conclusion and that the end result will be worth the wait. In the meantime, readers have two dazzling, suspenseful, claustrophobic thrillers to pour over! – Javier E. Trujillo

THE BATMAN | “The Riddler” by Michael Giacchino