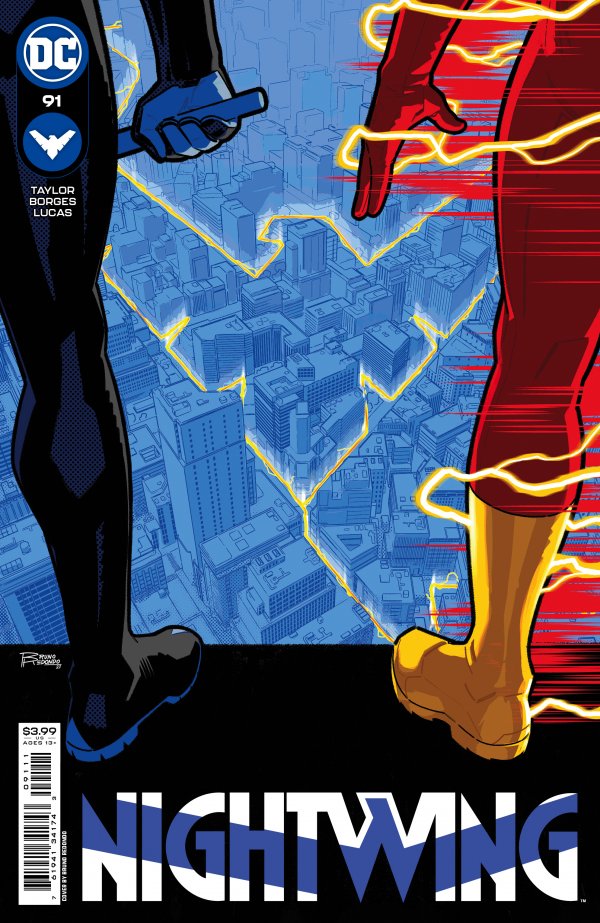 We begin NIGHTWING #91 where this team-up left off, with Nightwing and Wally West’s Flash about to battle KGBeast and his henchmen.

My favorite comic book panel of the last few years was when Batman beat the hell out of Bane in Arkham after he orchestrated Dick Grayson being shot in the head and losing his memory. Needless to say, seeing the Dark Knight dig his fist into Bane’s face and yelling, “You shot my boy!” brings me to my happy place.

You’ll get that same feeling too if you’re a fan, as The Flash beats up KGBeast at a high rate of speed while delivering some verbal blows, as well. I truly did appreciate Flash referring to Nightwing as “one of the greatest heroes” here, the kind of line typically reserved for the Trinity of Batman, Superman, or Wonder Woman.

However, while I’m down with the Flash pummeling KGBeast, I wish it hadn’t been restricted to one page. There is a two-page reveal later in the issue, but this would have been a more appropriate moment for that.

If I had another minor nitpick it’s that Nightwing and Flash cover a lot of ground. The Flash’s super-speed makes a lot of threats and challenges seem puny and more of an inconvenience. But enough wild cards and obstacles are thrown in for me to give NIGHTWING #91 a pass.

Plus, the comradery between Nightwing and Flash makes the issue work. They play off each other well, both in how they use their detective skills and in their humor (including the best use of the line “I’m okay” line since Zoe Bell in DEATH PROOF).

NIGHTWING #91 is a team-up issue that borders on making threats seem easy to deal with but you let it slide because the heroes get to shine brightly. – James Armstrong