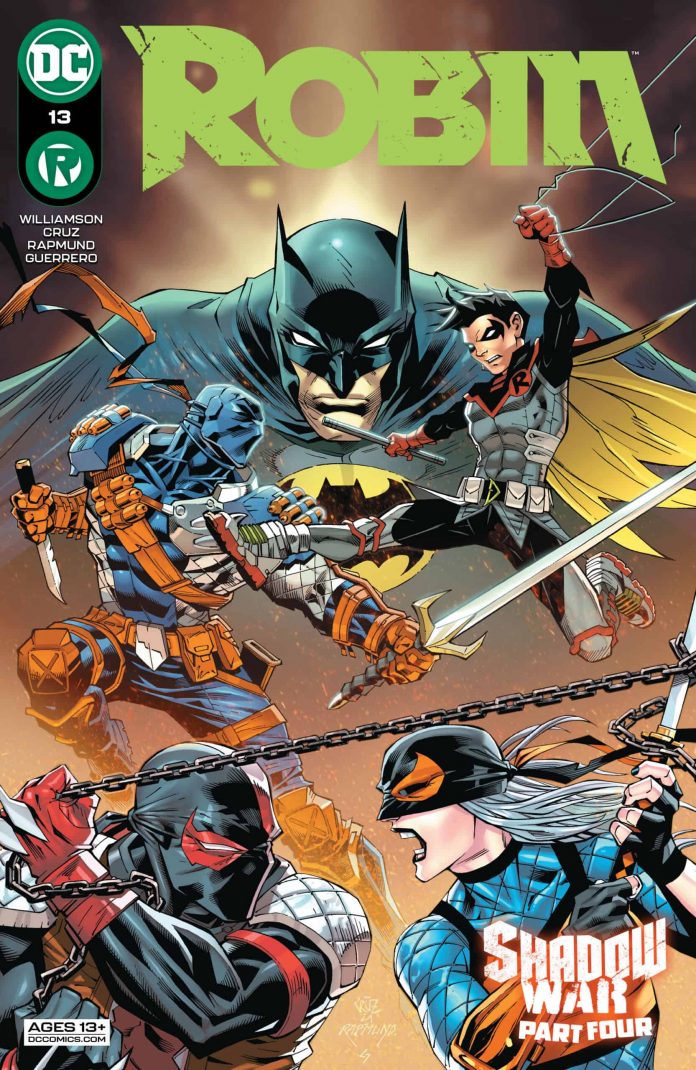 SYNOPSIS: Robin and Ravager have caught up with Deathstroke and Respawn! Can they convince Deathstroke to turn himself in…or fight to the death? And what startling revelation does Robin learn that shocks this story to its core? Plus, Batman goes deep into the conspiracy behind Ra’s al Ghul’s death and discovers it’s bigger than he thought. He must call in backup…just not the backup you’d expect!

Writer Joshua Williamson continues his epic across the Bat-Family of titles, providing revelations along the way! With Respawn’s heritage revealed, it’s time for the Dynamic Duo to learn the truth!

I really liked how Damian reacted to learning he has a half-brother. For a kid who’s got several foster brothers, having someone more genetically tied to him seemingly means a lot. Too bad Respawn doesn’t feel the same! Cruz and Rapmund go back to the tried-and-true two-page spread action sequence that this title has been known for as the brothers fight once again.

In general, the art didn’t fully land with me this time. It’s certainly not bad and there are some fantastic panels, not to mention a horrific execution that is told well. Seeing a yellow oval on Batman is always welcomed, but certain faces didn’t work for me, nor did I feel that Respawn resembled Damian that much. Granted, they have different dads, but the characters’ reactions were so strong to the reveal that you’d think they were looking at a Damian clone with white hair!

Williamson spends most of the issue getting all the main characters on the same page, catching them up to what the readers know-Deathstroke was framed. It made for a lackluster experience for me, but I did find a lot of enjoyment in seeing Batman and Damian finally reunite. It just felt like a side note to all the other developments going on, whereas I’d like to focus more on it. Their rift got healed overall too quickly given all Damian has been dealing with, not to mention his dad.

The ending cameos were a mixed bag for me. If you’re a fan of some of the recent characters that sprang out of Joker War, then you’re sure to be happy.

While this chapter didn’t dazzle me as much as some of the more recent issues, it does give us some key moments in the life of Damian Wayne. Something just felt a little undercooked when it came to the art and story, leaving me not as satisfied as recent entries. Still, the Shadow War rages on and I’m curious how this will further impact Robin. – Javier E. Trujillo

THE BATMAN | Why Matt Reeves “Passed” On Ben Affleck’s Script