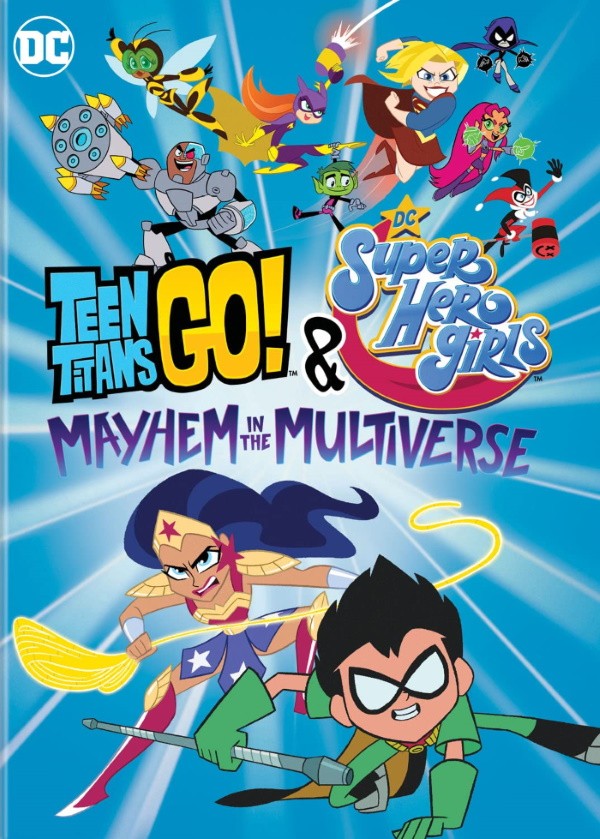 Admittedly, I have seen TEEN TITANS GO! TO THE MOVIES (hilarious), and a few episodes of TEEN TITANS GO! (clever, but a bit obnoxious). I have never seen DC SUPER HERO GIRLS. So when I went into this movie, I had nothing to bring to the table except familiarity with the characters showing up.

And in the end, I think this mashup is harmless, clever, and overstays its welcome (just a little bit).

The setup is quite simple: Lex Luthor and the Legion of Doom capture all of the DC heroes, except the Super Hero Girls. United, they cross dimensions to go save the day, but make a wrong turn and end up at Titans Tower. Together with their brains, and jokes, they need to correct the errors and save the heroes.

Overall, I think blending these two universes totally works. They’re both self-referential, funny, and respectful to all of DC lore. Their interactions gel well and complement each other. Also, their art styles work well alongside each other and aren’t distracting in any way. The look of this movie is crisp, clear, and bright. It’s some great animation.

My only “negative” with the movie is that for me, I spaced out a little bit. This wasn’t a movie that demanded my attention, and I found it to drag on a bit. I also thought it took too long to bring the two teams together. For children’s programming, I wonder if it’d be able to keep their attention for the entire duration as well?

Overall, TEEN TITANS GO! & DC SUPER HERO GIRLS is a fun, harmless, and very respectful movie aimed at kids. While it may drag in some areas, it’s also not a chore for adults to sit through either, as there are plenty of quick, witty comments for them as well.  Chalk it up as an easy viewing for a weekend morning. – Ryan Lower