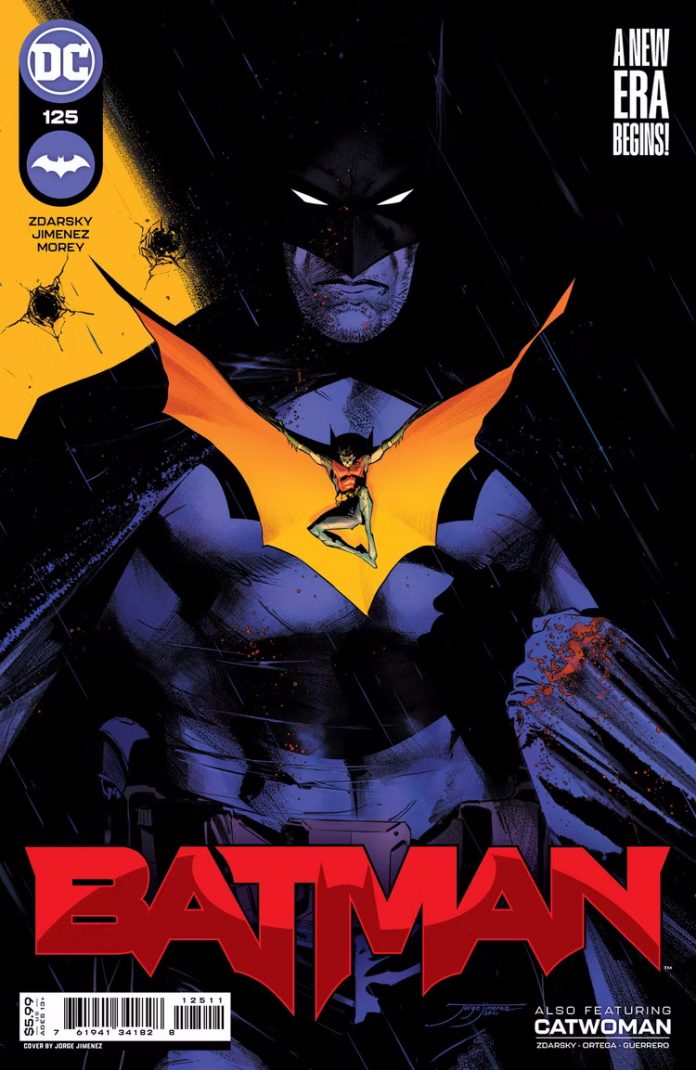 If you’re looking to jump back into the BATMAN title, now is the time.

A new era begins this month, with the creative team of Chip Zdarsky and Jorge Jimenez controlling this section of Gotham City. And while their previous work in comics definitely earned them the keys to the city, this first issue shows they won’t need to return them anytime soon.

The issue is bookended by a familiar location in the Batman mythos (that I really miss in these books), but we are currently caught up with a Bruce Wayne who is having nightmares. He reaches out to a familiar voice for a sense of calm, but we feel like this Bruce is a little lost. He does find his way back in the cape and cowl, this time inspecting a murder scene. To avoid spoiling where the book takes you from there, I’ll refrain from saying much more except:

There’s a reason Robin is on the cover.

The Penguin gets one over on Batman.

Writer Chip Zdarsky does a great job kicking us off on this new adventure. There isn’t any carryover from the previous arc, but it doesn’t lose us in setting up where we are at the beginning of this story. Familiar aspects of the Bruce Wayne/ Batman story remain, but there are changes. I think a key to what worked was the emotional level Zdarsky zoned in on right away. We see/hear what Bruce is going through with these nightmares, who he’s talking to, and the struggle while he’s dealing with Robin. Stories are great with action and adventure, but we need to care about the characters and he does a great job here.

I’m stoked that artist Jorge Jimenez is back on the BATMAN title. He is full of style and gets to stretch his wings to cover small moments, action scenes, horror, and everything in between. Along with colorist Tomeu Morey, there are some exceptional panels in this issue that really stand out amongst other Batman comics of late. I personally loved how this Penguin looks — definitely giving some Danny DeVito vibes. The Batmobile looks fantastic. The setting of the bookended location is dark yet comforting. This is an excellently drawn issue.

I’m not sure how long this team will be on the BATMAN title, but this is a welcome start. There’s a clear entry point into the setting, the story is full of surprises, and we’re teased at the end.

The Batsignal is shining bright on BATMAN once again. – Ryan Lower