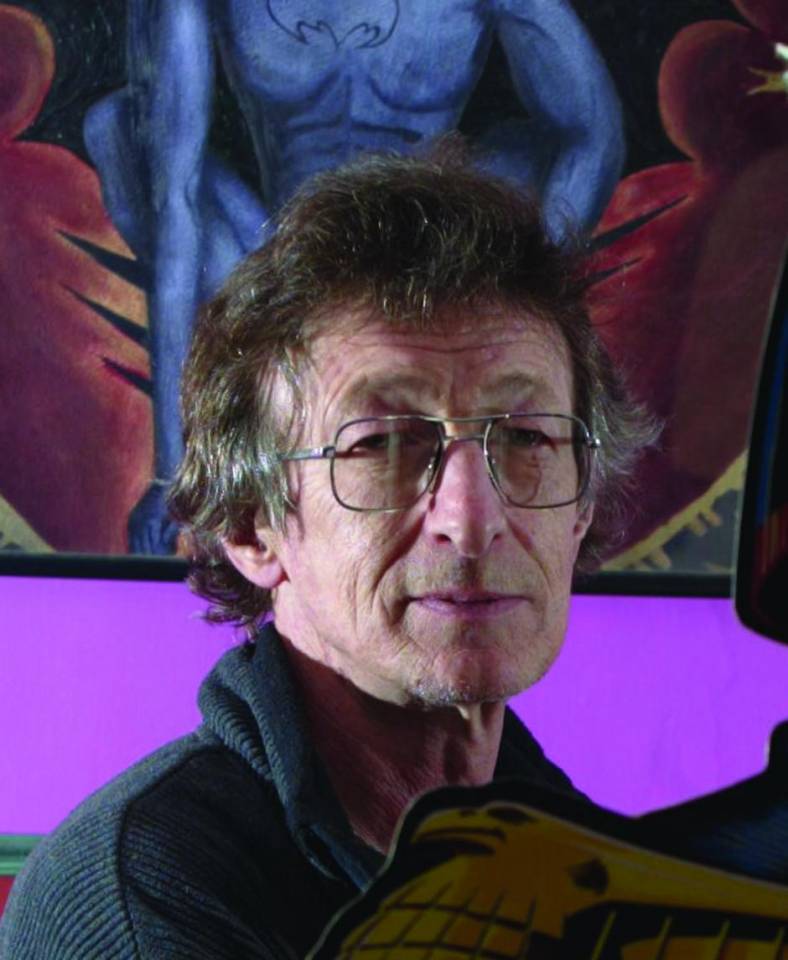 The Batman fan community was saddened again this week by the passing of the much-beloved writer Alan Grant. Friends, colleagues, and fans had nothing but gushing things to say about the man personally and our condolences go out to all who knew and loved Alan Grant personally.

Alan Grant has a massive 2009 issues of writing credits, including reprints, under his belt according to the Grand Comics Database with fan favorite runs on characters like Judge Dredd, Lobo, and The Demon in addition to Batman in those credits. For the sake of brevity, I’m going to concentrate on his contributions to Batman, but there was a lot more to Alan Grant and it’s worth acknowledging.

Alan Grant was part of the great British invasion of the American comics industry in the 1980s which brought a fresh perspective to DC and Marvel and helped revitalize the comics industry. Alan Grant with temporary writing partner John Wagner, who apparently didn’t contribute much according to Alan Grant, took over as the regular writer of Detective Comics with issue #583 which hit the stands in November 1987. This was an era where creative teams were still trying to make sense of the changes that Frank Miller ushered in and how to apply them to monthly Batman comics. Alan Grant was following fan-favorite writer Mike W. Barr, was a virtual unknown in America, and was joined by carryover and newcomer artist Norm Breyfogle so it was not a hot fan-favorite creative team. And, apparently, editorial limited them from using most of the established Rogue’s Gallery. But sometimes lightning strikes and Alan Grant and Norm Breyfogle would soon be one of the most beloved creative teams in the history of Batman comics. 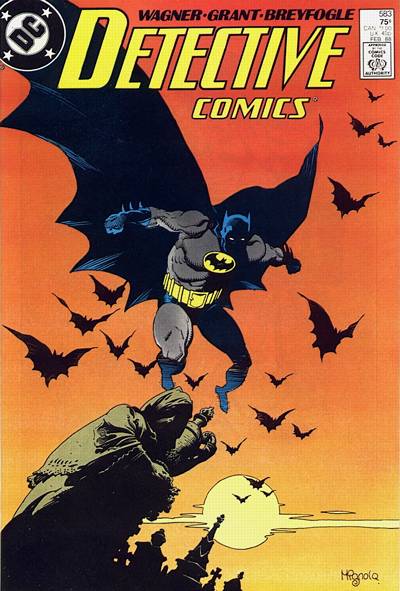 Right from the first issue, you can see something special emerge. In Detective Comics #583 we see Batman start an investigation to bring down a drug ring. Standard stuff, except that Alan Grant was able to bring some dark humor and taste of the bizarre to it by having the drug ring led by brand new creations The Ventriloquist and Scarface. Alan Grant’s Batman was driven and had an edge, but he also had humanity and heroism to him that managed to remind you of The Dark Knight Returns while also not crossing over into a-hole Batman territory. Norm Breyfogle quickly proved to be an ideal artistic partner, managing these bizarre concepts with art that trod the line between cartoony and realistic and which was always dynamic and atmospheric. The two played to each other’s strengths, and arguably only Simon Bisley on the Judge Dredd/Batman crossovers would manage to find that same dynamic with Alan Grant.

The partnership between Grant and Breyfogle really blossomed over the next year. Yes, looking at it from the perspective of modern blockbusters, the initial run may not seem like it was full of monumental moments that can be mined for motion pictures. And perhaps that’s true, but reading those comics on a month-to-month basis was always a blast and I’d argue that they work as comics a lot better than many of the plot-heavy events. The ban on using the established Rogue’s Gallery actually made the comics Grant and Breyfogle were creating fresh and exciting. Sure, The Ventriloquist & Scarface, The Ratcatcher, The Corrosive Man, Mr. Kadaver, the Street Demonz, Anarky, etc. may not be A-lister villains that you’d expect to carry a movie nowadays, but what they were was fresh, new, unpredictable, bizarre, and fun. With one to four-part stories, no writing for the trade in those days, each issue delivered mystery, action, atmosphere, and fun. In many ways, it was a slightly more adult version of Batman: The Animated Series before its creation, and it was beloved by fans. 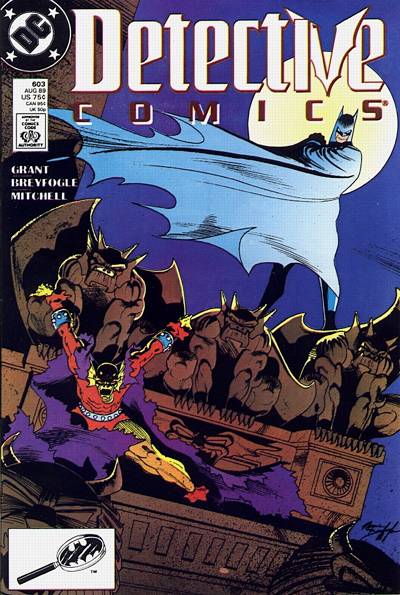 It may have been ahead of its time too as it fits in very well with Tim Burton’s BATMAN. Atmospheric, bizarre, and with a dark sense of humor worked both ways. If DC wasn’t happy with what Grant and Breyfogle were doing, they certainly could have made a change in direction when Bat-mania hit in 1989. Instead, the Grant/Breyfogle team continued, without John Wagner, and they allowed the comic to dip into the DC Universe, The Demon made a memorable guest starring appearance right when BATMAN (1989) opened, and opened up the Rogue’s Gallery with The Mud Pack. And Grant and Breyfogle went on without missing a beat. With the appearance of Tim Drake as Robin, the team was integrated more fully into cross-continuity as that was an event that could not be ignored. And, arguably, Grant did the most of the teams in developing the new Batman and Robin relationship.

That integration didn’t matter to Grant and Breyfogle as they found themselves adept at switching gears. And, my personal taste just loves the structure of those single issue to four-part stories which always delivered the goods in terms of action, pacing, atmosphere, and character and never felt padded like many of the stories designed for the trade often feel. On a pure month-to-month comics reading basis, this may have been the best extended run of Batman comics during my lifetime. 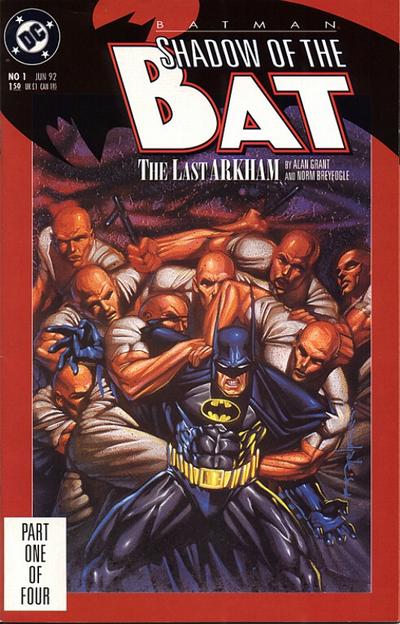 The team was ultimately rewarded with their own title, BATMAN SHADOW OF THE BAT, which would introduce one last famous new villain in Mr. Zsasz, but Norm Breyfogle would soon leave. None of the other artists would have quite the chemistry that Breyfogle had with Grant and getting swept up in events like Knightfall would take away some of the uniqueness of Alan Grant’s plotting and character creation. Still, even if it didn’t have the magic of the previous half-decade plus, Alan Grant’s Batman work would continue to always be worth the time and money to read. Maybe because Alan Grant had written Judge Dredd he knew where the line between hero and parody of a hero was and although he could tread up to it, he never managed to topple over the line. There was darkness in Alan Grant’s Batman, but there was also light. Some of Alan Grant’s politics would seep through here and there, but it was always balanced into the story context, was never strident, and just made the work more individual. And I think that Alan Grant’s voice always came through in his work.

Alan Grant was eventually swept out with editorial changes, but not after a remarkable body of work on Batman. Supposedly he had proposed some additional stories over the years, which were foolishly rejected by DC editorial. But, missed opportunities aside, the half-decade-plus run of Grant and Breyfogle was an absolute triumph that’s going to be long remembered. Here’s hoping that Alan Grant and Norm Breyfogle are in a better place continuing their remarkable run. – Robert Reineke