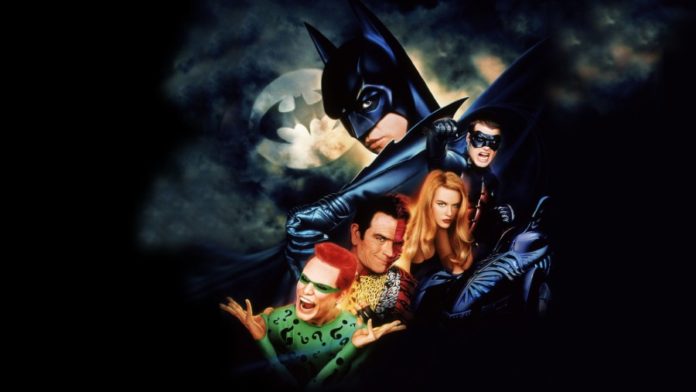 PREVIOUS: “Batman in 1994.”  All years in Batman history can be found HERE.

The new suit – which was mostly all-black/gray – was likely inspired by the Batsuits sported by Batman in the Warner Bros. live-action films.

JUNE: The Batman film series gets a “soft reboot” as Val Kilmer takes over for Michael Keaton in BATMAN FOREVER.

Released on June 16th, BATMAN FOREVER – starring Val Kilmer as Batman, Jim Carrey as The Riddler, Tommy Lee Jones as Two Face, and Chris O’Donnell as Robin – the film would go on to gross a tad over $184 million domestically and was the #1 movie of 1995 at the box office.

BATMAN FOREVER will be Val Kilmer’s only turn as Batman on the big screen.

JULY: Batman gets yet another solo comic book with the quarterly titled THE BATMAN CHRONICLES.

SEPTEMBER: Dick Grayson’s Nightwing gets his own four-part solo miniseries starting with NIGHTWING #1. Nightwing would get an all new, black and blue costume, in issue #2. 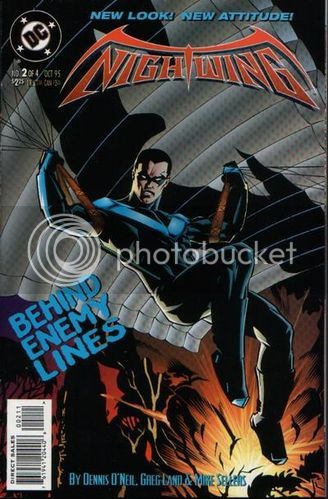 DECEMBER: The Batman has to save and innocent Joker from the electric chair in the graphic novel, THE JOKER: DEVIL’s ADCOCATE.

DECEMBER: In the ELSEWORLDS tale BATMAN: BROTHERHOOD OF THE BAT, the son of Bruce Wayne and Talia – Tallant – takes up the Mantle of the Bat to defeat an army of evil Batmen created by Ra’s Al Ghul. 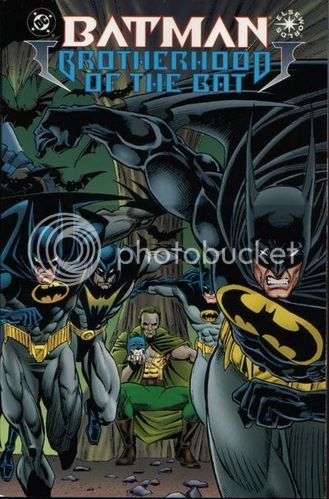 JETT REMEMBERS
Batman in 1995…I remember two things vividly: The new Batman costume in the comics and, most of all, BATMAN FOREVER.

FOREVER was the first Batman movie that I attended that had a “Midnight Screening” – though the actual time it started was 10PM.

My buddy Chris Crippen – whom I’ve known for just about my entire life – and I went to a local bar in Port Arthur/Port Neches/Nederland, TX (if you’ve been there, you KNOW why I wrote it that way) before the screening at the “Central Mall Theater” for a few beers before we headed to the theater. Looking back, I suspect that was the precursor to BOF’s Batman/DC movie watch parties. Since this was before there were bars at theaters, we did it “old school” and snuck beer (and in Chris’ case, a bottle of whiskey) into the cinema.

Yeah, I used to be cool and “edgy” like that back in the day.

As I write this and think back to watching FOREVER that night some 22 years ago, I recall how much I enjoyed the film upon first viewing – mostly because it was so different than BATMAN RETURNS which disappointed me immensely 3 years prior. Hell, I’m not embarrassed – no actually, I’m proud – to say that I still kinda like BATMAN FOREVER. But there’s an even more significant reason for my affection for this movie…

Born in 1995, 1997, and 2001 respectively, this was the Batman movie that introduced my children to Batman via many home screenings.

Thus, that’s probably why I’ll always have a soft spot in my heart for BATMAN FOREVER. NOW, about that new comic book costume…

I was actually of two minds on it. As someone – even as a kid – who didn’t dig Batman wearing the “underwear” on the outside, I was glad to see that gone. On the other hand, while I liked the kinda-sorta “all-black” uniform they were going with, I never liked that fact that it looked like Batman in a black leotard with spikes coming out of the forearm and calf areas.

It bugged the HELL out of me that there was no detail showing that Batman was wearing 1) armor, 2) gloves, and 3) boots, especially! Whatever, I shall digress.

Also, while I really liked Kelly Jones’ Batman comic book covers, I never was a big fan of his work as BATMAN‘s main artist.

What did you think of “Batman in 1995” and what are your memories? Post your thoughts in the comments section below! – Bill “Jett” Ramey