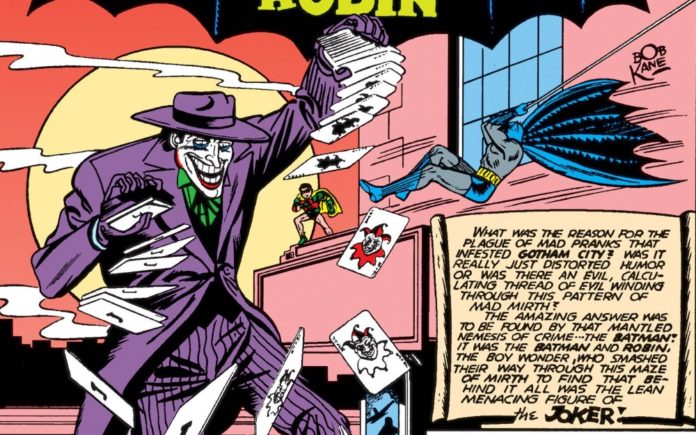 One of the touchstones of The Joker’s interpretation in comics is the first dozen stories featuring the Joker that follow his introduction as a cold blooded killer and his transformation into a clever prankster that would bedevil Batman over the years without falling prey to the morality police. There are a dozen stories that make up this initial introduction, so 5 parts to go after this.

The Return: No explanation, presumably The Joker just swam to shore after surviving his fall from the lighthouse.

The Plot: The Joker and henchmen perform an increasingly dangerous series of practical jokes to confuse the police and panic the public while plotting crimes.

Body Count: Three (confirmed), two by Joker venom and one by medicine replaced with poison, although potentially many more.

Other Mayhem: Minor practical jokes including hotfoots and chairs being pulled out from other people, false fire alarms, a man is scalded in his shower, a riot is started with a pile of (counterfeit) money thrown to greedy Gothamites, a car crash is caused through tampering with road signs, a passenger train is derailed, Batman and Robin fight the Joker’s thugs on two occasions, The Joker pulls a robbery at gunpoint, guards, a Duke, and his entourage are gassed, and Batman, Robin, and The Joker battle on top of a moving train.

The Outthink: Batman solves The Joker’s riddle clue and interrupts his robbery attempt.

The Comeuppance: Batman sends the Joker falling off the top of a train into a chasm.

It was a full six months between The Joker’s appearance in BATMAN #5 and his reappearance in BATMAN #7 and obviously some rethinking had been going on in the meantime. They obviously knew they had a great villain here, but they didn’t quite know what to do with him as simple burglary and gambling schemes didn’t really measure up. Bill Finger’s solution, which is still relevant to this day, was the larger than life Theme crime spree. And, for the first time since his first appearance, the larger than life drawing of The Joker on the title page appeared to be relevant.

The plot swings into gear with a newspaper ad advertising for practical jokers under the name I. Rekoj, the second time The Joker has used that obvious alias. The most hurtful of the practical jokers are selected, a series of weapons are passed around, and the Joker reveals himself and announces that if they don’t work for him he’ll turn the weapons over to the police and implicate these men in crimes. I’m dubious of the merits of that scheme, but these men are of low character anyways and accept. It’s probably noteworthy that the viral marketing campaign of THE DARK KNIGHT has utilized some similar stunts.

The prank spree engages in earnest turning from relatively innocent, a man scalded in a shower with reversed taps, to deadly, car crashes, train derailments, and poison switched with medicine. A noteworthy item is a riot being started with counterfeit money tossed to a crowd. A possible influence on BATMAN (1989)? Finally, The Joker drops leaflets from a plane announcing that he’s responsible for the pranks, he’s laughing at the police and Batman, and that he’ll be stealing a valuable gem soon.

We then cut to an already familiar scene of Bruce Wayne listening to Commissioner Gordon as he reacts angrily to The Joker’s boasts. And, conveniently enough, he’s there when a man arrives saying that he received a note from The Joker threatening to rob him of a valuable diamond in his possession. Police guards are dispatched and Batman and Robin are soon on their way, only to arrive to find the two police guards bearing the familiar rictus grin of The Joker. They rush upstairs to encounter not one, but a dozen Jokers (henchmen in disguise) and are soon overwhelmed. Meanwhile, across town, The Joker is pulling a real robbery.

Still getting the hang of this classic formula, nothing much happens to Batman and Robin in the meantime. No villainous deathtraps with a taunting villain. No waking up just in time to avoid the Joker putting a bullet in their skulls. They merely wake up groggy and find a note from The Joker stating that the diamond that they were protecting was nothing more than a glass door knob and what The Joker was really up to, the punch line to a joke on The Caped Crusaders.

Unfortunately Bill Finger really doesn’t have a third act to this story despite a strong start. The practical jokes theme is dropped and The Joker calls up the recovering Batman and Robin to gloat and give them a riddle clue to his next crime “When is a Duke not a Duke?” FWIW, this is the first instance of a riddle clue in Batman’s history that I can find, certainly an important moment. Batman soon puzzles out that the answer to the riddle is “when The Joker impersonates a visiting Duke to steal war funds” and Batman and Robin are off. Meanwhile, The Joker gasses the Duke and his entourage and utilizing his mastery of disguise is off to steal the funds. Batman and Robin arrive at the ceremony, deal with the guards that don’t realize it’s The Joker in disguise as well as The Joker’s goons, thrown food is involved, and then are off in hot pursuit of The Joker. They soon corner him on a passenger train and a fight breaks out ending up on the roof of the train cars. A punch sends The Joker flying off the train into a chasm for another apparent death and the case is over.

While still rough around the edges, the outline of many a classic Batman story, crimes centering around themes and deliberately dropped clues to tantalize Batman, is shown for the first time here. There’re not many Joker stories even to this day that totally disregard that formula. In addition, you start to see a less homicidal Joker that would prove to be a viable continuing nemesis. The days of The Joker being a killer weren’t going to vanish immediately, and in his next appearance the death toll reaches an apex, but The Joker’s days of just being a random killer and common criminal were at an end. – Robert Reineke

NEXT: “The Cross Country Crimes!”

Matt Reeves Talks THE BATMAN (or Whatever It’ll be Called)