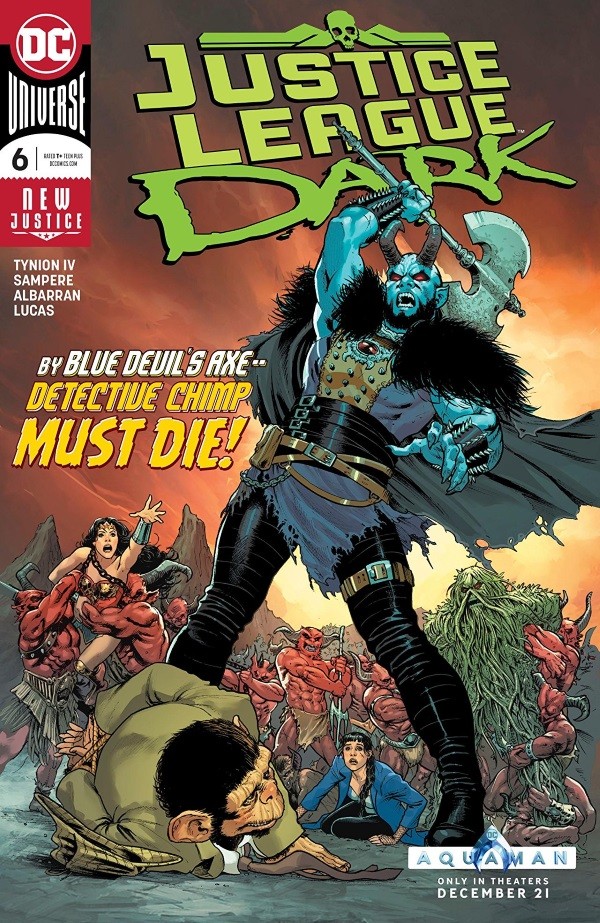 SYNOPSIS: The Justice League Dark…trapped in the mystic realm of Myrra! Their jailer? Blue Devil…and he wants revenge on Detective Chimp! Seems Bobo tried to magically resurrect his best friend, the original Nightmaster, but lost control of the spell and filled Myrra with zombies instead. And left Blue Devil behind to get eaten. So BD’s kinda sorta maybe got a reason to be pissed. With that in mind, will Wonder Woman and the rest of the JLD even step up to help Bobo against a raging Blue Devil? That sounds bananas to us.

Myrra is all kinds of screwed up, and Detective Chimp is the one responsible.  After trying to use Magic to bring back the previous Nightmaster from the dead, Bobo has broken death itself, and now the Justice League Dark must figure out how to reverse the spell and fend off the leagues of undead that are on their way to besiege the JLD’s castle stronghold.

We’ve arrived at Justice League Dark #6, and regrettably, not a whole lot has changed for this run.  It’s just.  Not.  Good.

I had a conversation recently with another contributing writer at BOF who told me that James Tynion IV has written some engaging books in the past, but I have to say, I find that very difficult to wrap my head around.  Most of the Justice League Dark run so far has been an absolute slog to get through.  Comic reading should give you (and leave you with) a sense of joy, a sense of wonder; but this has never felt joyful, never felt wonderful.  In fact, I struggle to even conjure up any emotions that I’ve experienced while reading this series.  If I wasn’t reviewing it, I certainly would not be reading it, much less paying for it.

As far as the writing goes, I can offer one piece of positive feedback this month: the characters are used better in this issue than they have been previously.  They are each given something to do, whereas in previous issues I struggled to understand why they were included.  But even then, Tynion continues to fall into the same trap of telling us about the story instead of actually telling us the story.  In this case, he uses Detective Exposition – um, I mean, he uses Detective Chimp to narrate what happened in Myrra and how he came to disrupt the land through his misuse of Magic (I’m sending Cornelius Fudge an owl).  And the entire time that this speech is going on, I’m thinking – wow, the story that Bobo is telling is at least mildly interesting – can I read that comic?

The pacing is also off.  This brief dilemma in Myrra is swiftly put to rest before any of us readers get a chance to get even minutely interested in what’s going on or how the characters are going to react.  Even the exchange with John Constantine, Swamp Thing, Doctor Fate, and the Phantom Stranger, which I think was supposed to be epic, is practically over before it begins.  It’s really hard to care when a story is written with such laziness and indifference.

But not all is lost, dear reader, because I must say that the artwork is better this month.  Illustrator Daniel Sampere does a wonderful job capturing the characters – Bobo’s despair, frustration, and anger come through nicely, and Diana and Zatanna are rendered wonderfully.  Colorist Adriano Lucas steps up as well, filling the corrupted skies of Myrra with dazzling pinks and purples, lending the world an appropriately off-kilter feel.

I believe penciller Alvaro Martínez Bueno and colorist Brad Anderson are back next month, and I will welcome them back with open arms – their artwork has been the only thing worth tuning in for so far.

I think John Constantine impeccably sums up how I feel: “This end-of-the-world crap is #$@%&$ exhausting,” he remarks this issue.  Couldn’t agree more with you, JC.

Until next month! – John Funderburg