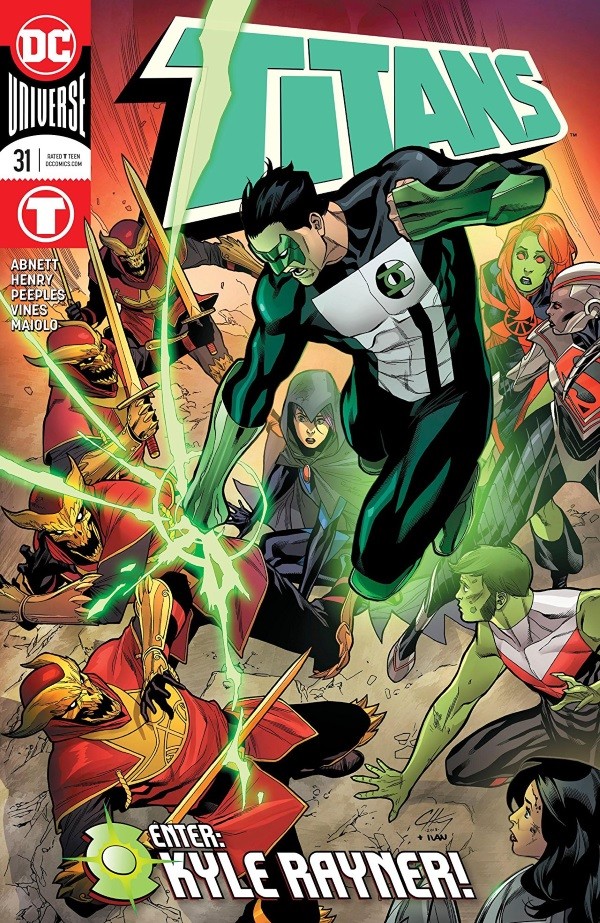 SYNOPSIS: If you want blood, you got it…but the Titans may not like it! There’s a new leader of the Blood Cult, and her name is Mother Blood! Their mission? Kidnapping the best scientific minds from around the world to perfect their emergent-energy weapon. Their next target? Steel! And the Blood Cult has an ace up its sleeve: weaponized Source Wall energy that turns its victims into blood zombies. (As if there weren’t enough blood motifs in this ish…) In the Titans’ blackest night (wink), a new hero has arrived to help turn the tide.

After being marooned the last two issues, the Titans return to Earth…and jump head first into another set of problems. Everything the team has encountered so far is coming together, and there look to be several showdowns are in the forecast. Oh yeah, the greatest Green Lantern (suck it, Jordan) officially joins the team.

I really enjoyed the previous issues. The Titans were torn apart only to come back together stronger. Following such tried and true storytelling, I expected a lull with this issue. There has to be peaks and valleys with this long-form storytelling, the audience can’t burn bright the entire time. This issue took that a little too literal and tried to put out the entire fire all at once. It is not terrible, it is just everything the team has been working comes into play here, it just felt too…easy.

Before I rain on the parade, my dream does come true: Kyle Rayner joins the book. I have made it no secret, Kyle is the best there is, best there was, and best there ever will be (word to Bret Hart). Seeing him become a vital part of this REBIRTH continuity has been great. He is an awesome character that should be utilized. With the end of Hal Jordan and the Green Lantern Corps, I was afraid Kyle would be on the backburner again, but I am happy that he’s made the jump to Titans. Early in Kyle’s career, he was a Titan with Donna Troy, so it was fun to see them together. I am interested to see if they pick up on those old threads.

Now, the rest of the book.

The biggest sin of this book is that it feels rushed. Here’s the quick rundown:

Instead of a story with Kyle, while they head to Earth, the just make it home, where they miss the event they caused them to be stranded (see Drowned Earth). Beast Boy just so happens to be possessed by the Blood Cult and tells them that everything they have been working on ties together. Now they have to go back to the fictional Unearth to stop the Cult, and that happens just as Raven learns that’s where her soul self is. To top it off the Drowned Earth information they thought was now useless is just what they need to get back to Unearth.

I’ve never had an issue with the book’s pace before, which is what makes this feel like a jumbled rush to fit in everything. It’s as if the writer was told that he needs to finish his arc in two issues, instead of four.  The rush job diminishes all of the tensions between the team members. For the most part, that was addressed last issue, but they went from just beginning to establish trust with each to a full functioning well-oiled machine in two pages. It just felt very out of place and took me out of the action.

One last thing: I hate how Beast Boy is being developed. He went from a green shape-shifting kid to the Shaggy Hulk. I understand what they are going for, but I think they should have settled with the (for lack of better terms) Teen Wolf look he started the current book with.

I hope next issue kicks it back up. – E. Chad Metz