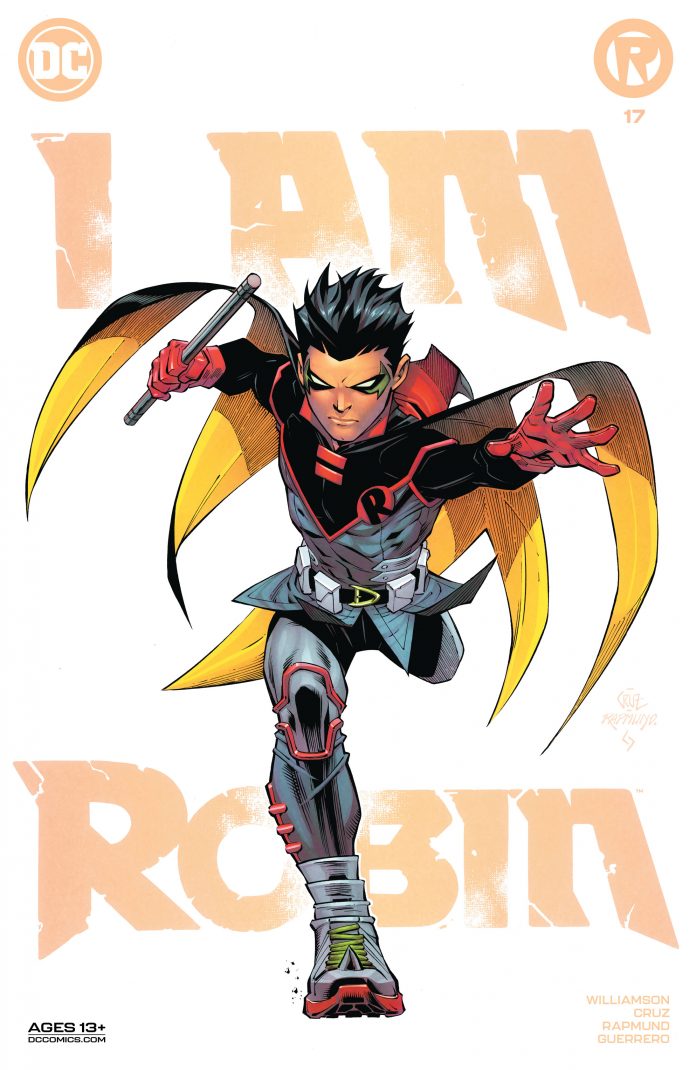 SYNOPSIS: Heartbreak! Lord Death Man reveals the truth about Flatline! Can Robin forgive her?! Since leaving Gotham, Damian has grown and trained to be a hero, but now that story comes to an end as he’s pulled into a shocking new storyline that will test his role as Robin and his place in the DCU!

Much of Robin has been set at Lazarus Island, so it’s fitting that it concludes there as well. While most of the mystery has been resolved, there are a few dangling threads that Williamson plays around with this issue.

Lord Death Man and his ties with Mother Soul hint at future troubles for the Bat Family. Williamson’s take on the character has been more comedic compared to Grant Morrison’s, but it feels appropriate for the tone of this comic. For being a boss, he’s more of a pawn. His infatuation with Mother Soul blends well with his ability to seemingly resurrect. In fact, it enables him to temporarily level up this issue, providing most of the action in this installment.

The main draw though is Damian and his personal growth. Roger Cruz’s opening splash page serves as a reminder of what Robin has endured over the course of this series and then throws him into the present and gives the reader a look at how opponents have become allies and friends.

Despite the hardship Damian has endured in his life, he’s still just a kid. Being trained by the League of Assassins may not have given him what most would consider a “normal” childhood and Williamson takes time to let Damian have some of those innocent moments he’s lost. I appreciated Damian finishing his manga, frolicking on the beach with friends, and having a romantic walk with Flatline. It’s not something I would’ve envisioned after the first issue ended him with his heart literally ripped from his chest!

Roger Cruz turns in another solid issue of art. It feels like he’s having fun depicting both the action and lighter moments Williamson’s story offers. The panel work on the two-page spread on beach day reads like you’re looking at Polaroids tossed on the table after a warm day of making memories. Luis Guerrero perfectly compliments the art with his colors, making me wish I could be there, too.

Writer Joshua Williamson closes out Damien’s series with a sense of whimsy, with just a touch of ominousness at the end. I would hope that after reading this volume, one would have more fondness and appreciation for the son of Bruce and Talia. He’s definitely grown a lot over these 17 issues, but he’s still trying to figure himself out. The closing scene between him and Connor as they compare and contrast themselves with their fathers was a great way to demonstrate that. Maybe the issue didn’t hit as hard for me as some others, but it felt like a fitting conclusion, with most of the people Damian cares about represented in some fashion.

As for the future, well, I guess we’ll have to see what Mark Waid has in store for readers in Batman vs. Robin! – Javier E. Trujillo