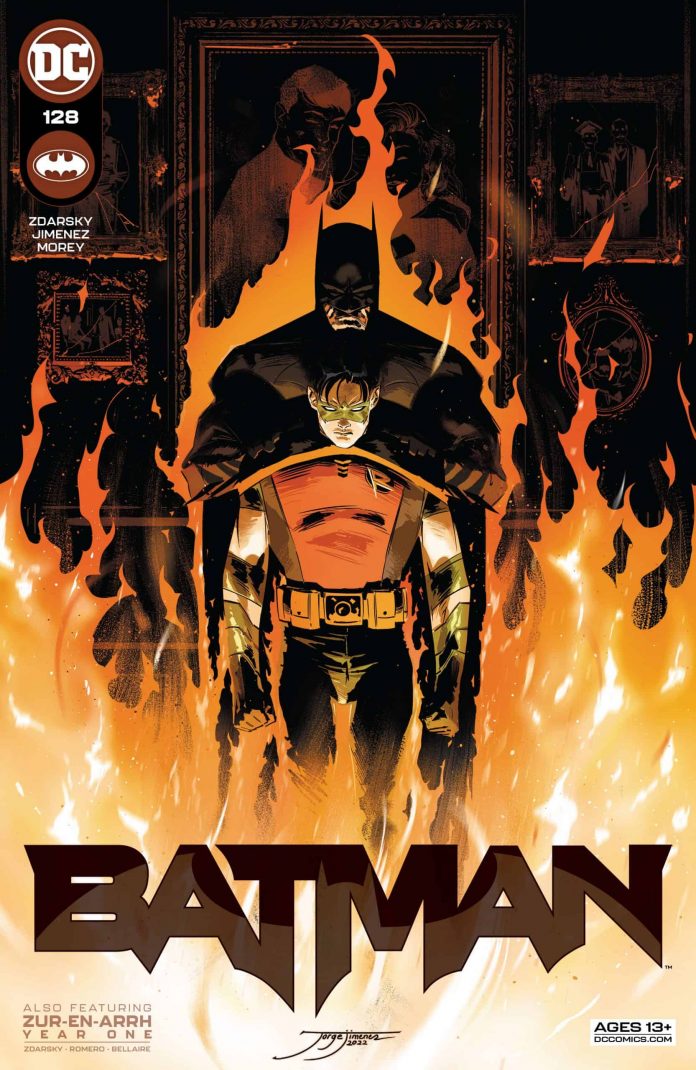 While the Batman of Zur-En-Arrh is mostly out of commission (more on that in a moment), the Justice League has come to help out The Dark Knight. As teased last month, Superman shows up to take down Failsafe. It appears he’s not alone, and it’s definitely a good thing. Meanwhile, Robin’s mission is to get to a safe haven, but there may be a hiccup in that plan. And Gotham city may be headed toward a future state of policing.

The inclusion of the Justice League in a Batman book has given me mixed thoughts. On one hand, I like solo Batman adventures in my BATMAN book. On the other hand, I liked seeing some of his allies make an appearance. And it does make sense, given the beating Batman continues to take. He’s desperate and needs help.

While the story does keep moving, it got a bit repetitive with “Batman planned for this”…and not in a completely fluid way. And in the midst of revealing each new Batman plan, it feels like there’s a bit of an extra attempt to make sure we, the readers, get it.

Speaking of repetitive, where the story ends up also has a “been there, done that” feel to it. Now, I haven’t read the next issue so I don’t know where it’s heading, and I can give writer Chip Zdarsky the benefit of the doubt. But it felt very reminiscent of the state of DC semi-recently, and I wasn’t a big fan of that.

Enough with the negatives though, because I did enjoy the issue. I thought the action was great, the appearances of other heroes were fun, and the issue kept moving. Artist Jorge Jimenez is firing on all cylinders and is knocking it out of the park. I really love his action and designs for each character. He has a great comic book look, with a perfect blend of color and shading. Big fan.

The backup story is focused on telling the “Year One” of Batman of Zur-En-Arrh. And I really dug it. The look, the story, the focus, how it fits into Batman’s history. It all seems to match up, and the design choices also popped. This was a really fun backup.

Overall, “Failsafe” isn’t my preferred Batman story, as I’m not a big fan of heroes taking on A.I. But the story is intriguing enough, with excellent art and a really cool backup. Recommended. – Ryan Lower

THE BATMAN | “The Bat and The Cat” Trailer Breakdown