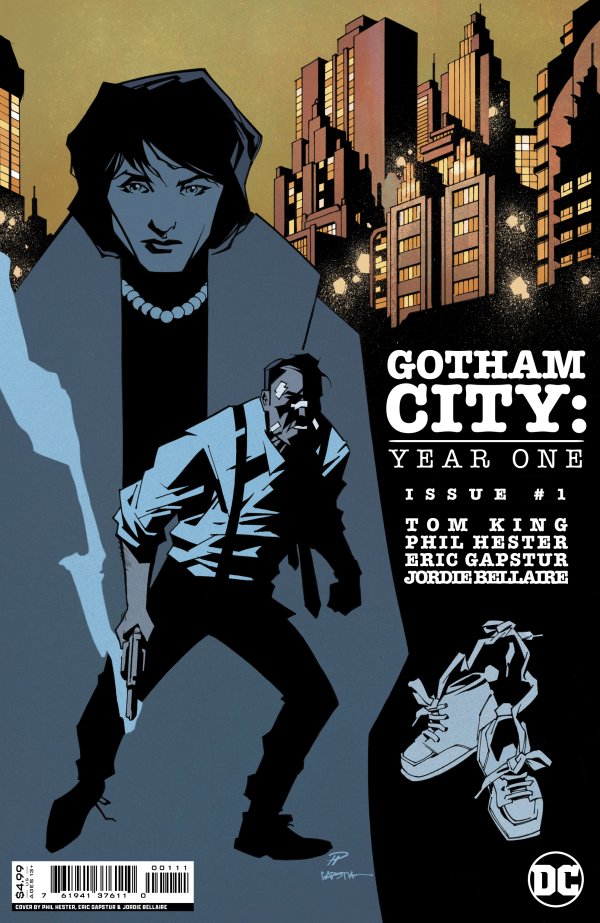 SYNOPSIS: There once was a shining city on the water, a home for families, hope, and prosperity. It was Gotham and it was glorious. The story of its fall from grace, the legend that would birth the Bat, has remained untold for 80 years. That’s about to change. Superstar creators Tom King and Phil Hester team up for the first time to tell the definitive origin of Gotham City: how it became the cesspool of violence and corruption it is today, and how it harbored and then unleashed the sin that led to the rise of the Dark Knight. Two generations before Batman, private investigator Slam Bradley gets tangled in the “kidnapping of the century” as the infant Wayne heir disappears in the night…and so begins a brutal, hard-boiled, epic tale of a man living on the edge and a city about to burn.

It was a dark and stormy night.

Because it was Gotham. Where the sun was always shining and kids played happily in the street, returning to their unlocked homes when their moms called them in for supper.

This is the Gotham Tom King is playing in. The Gotham of 1961. Where the well-to-do live on the north side and a lot of undue poverty reside in the south. Where prejudice is still a thing, even though the law says it shouldn’t be.

King creates a rich environment, one in stark contrast with what readers have come to expect from Gotham. There is almost a Rockwellian Anytown, U.S.A. vibe, but applied to a big city. There is optimism in its citizenry and hope that tomorrow will be even better than today.

A legendary character co-created by Jerry Siegel and Joe Shuster (no, not that one) leads the cast, and his ties to Gotham and Detective Comics run deep. Slam Bradley serves as our guide, narrating the story in true detective style. King’s usual flair works well here, especially with all his Bat Family experience.

In typical noir fashion, a mysterious woman comes to Slam with a job-deliver an envelope to the richest, most well-known family in town and DON’T OPEN IT. Slam, “Sam” to his friends, goes to complete the menial errand, sending his partner, Johnny, to tail the woman, who only gave her name as “Sue”.

It’s here that Tom King brings in the Waynes. I’ve read a lot of Batman and I can’t say I’ve ever heard of Richard Bruce Wayne, his wife, Constance, and their daughter, Helen. I can’t think of any alternate realities, be it comics, movies, shows, or games that would have introduced them, so I can only assume they are creations of King’s.

Usually, I tend to think of “The Waynes” as a benevolent force in Gotham, and maybe these are, too…except their daughter is missing, abducted by an unknown agent, only identified by the image of a bat. This opens them up to be associated with some rough characters, who aren’t necessarily nice. These aren’t your parents’ Waynes.

Before you know it, Slam is in over his head, caught in a web of deceit, one that could lead to the fall of Gotham and the rise of the corrupt one we know. King makes the most of the detective story tropes, weaving in familiar elements of the Bat-mythos so things feel familiar, yet fresh.

Aiding him in this endeavor is penciller Phil Hester, inker Eric Gapstur, and colorist Jordie Bellaire. Hester is a great fit for this title. Combined with Gapstur and Bellaire, they capture the noir underbelly that you would expect. At times, their work is reminiscent of Darwyn Cooke’s adaptations of the Parker novels, relying on near-monochrome compositions, where desperation begins to rear its thirsty head. This is a great-looking book!

Of course, things get even more complicated for Slam at the end, but I was not expecting that final page, adding context and raising A LOT of questions!

This book is off to a very promising start! The Year One concept is one DC has used a lot, with varying successes, but this one has all the makings of being special. Eschewing some of the more recent supernatural reasons for why Gotham is the way that is, King brings something unique to the table, presenting an era under a new lens for us to obsess about. Detective fans will have a lot to sing about when it comes to the story’s visuals, as a new coat of neon drenches the city streets and shadows spill out from every corner. Pour yourself a glass of whisky, folks. Light up that cigarette. We’re in for one helluva hard-boiled tale! – Javier E. Trujillo