In a recent interview with BRITISH GQ, actor Barry Keoghan (and the article’s author) explains how he got the role of The Joker in director Matt Reeves’ THE BATMAN.

Keoghan wanted to be The Riddler in the film and sent Matt Reeves and producer Dylan Clark an unsolicited audition tape.  Check it out below…

Now watch @BarryKeoghan‘s audition for Matt Reeves’ The Batman. This one got him the role of Joker. pic.twitter.com/vOPsKRdoid

Keoghan finally nabbed a meeting with Clark and found out that the role of The Riddler had been filled — at that point by Jonah Hill (who eventually exited) and later by Paul Dano (better choice, anyway). Regardless, BK asked Clark to watch tape anyway…and they did.

Finally, he got a call from his agent who told him that Reeves and Clark wanted him to play The Joker…but he couldn’t tell anyone about it (Officer Stanley Merkel, there you go).

The article continues after the video!

Keoghan’s Joker is a man made from his own experiences, both “a bit charming and a bit hurt”. Beneath heavy prosthetics that make him look like a maniac run through a meat grinder, Keoghan insisted his blue eyes stayed the same. “I wanted some sort of human in there behind the makeup,” he says. “I want people to relate to him… [to know] this is a façade he puts on.” The character is, to Keoghan, “a broken-down boy”.

Keoghan says that he hasn’t been officially invited back for THE BATMAN sequel, but adds “As soon as that call comes, I’m there man, I’m there.”

Check out the deleted scene from THE BATMAN featuring Robert Pattinson’s Batman and Keoghan’s Joker by CLICKING HERE.  For the full interview, CLICK HERE or any of the links provided. – Bill “Jett” Ramey 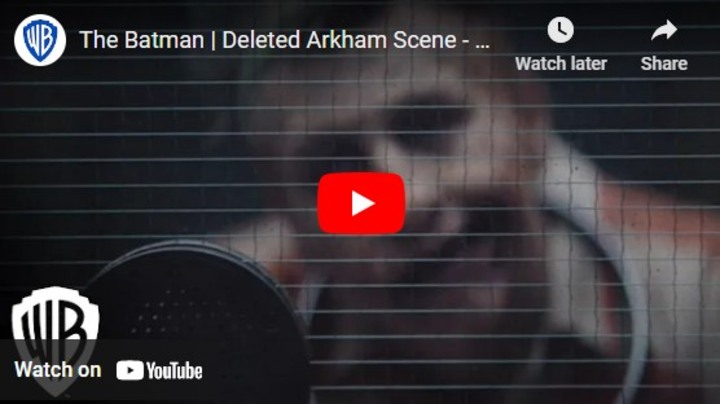