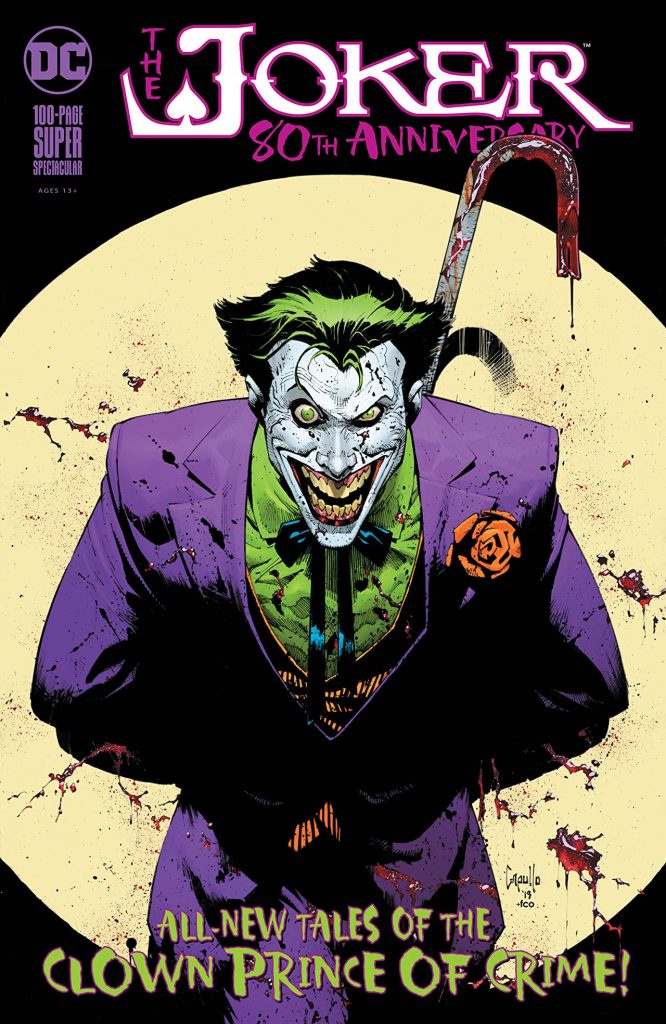 SYNOPSIS: The Clown Prince of Crime celebrates 80 years of chaos! The Joker has been the greatest villain in comics since his debut and to celebrate we have a who’s who of comics’ finest talent giving the Harlequin of Hate the birthday roast he deserves. The stories feature a range of terror and anarchy, showing how the Joker has impacted Gotham City from the police to Arkham Asylum, from the local underworld to the Dark Knight and his allies! Make sure to RSVP to this birthday bash-you wouldn’t want to wake up with a Joker Fish on your doorstep, would you?

This year, DC Comics has assembled a plethora of talent to tell stories celebrating 80 years of Robin and Catwoman. Now, they pull out the ace up their sleeve and deliver an all-star lineup of writers and artists for the Clown Prince of Crime himself, in THE JOKER 80TH ANNIVERSARY issue.

Much like the character himself, 10 stories deliver the humor and horror to varying degrees, sticking to the true nature of the most popular villain in all of comics. Listed below are the talent, titles, and quick set up of the stories included in the anniversary issue.

“Scars” by Scott Snyder and Jock

An eerie, patient exploration into how the Joker manipulates his victims and delivers a scary punchline.

“What Comes at the End of a Joke?” by James Tynion IV and Mikel Janin

We get a glimpse, and possibly slight origin, of the highly anticipated new character Punchline.

This quick story gives us a unique insight into the relationship between Joker and Batman.

The Joker joins the Dove Corps to save hostages in Guatemala.

“The War Within” by Peter J. Tomasi and Simone Bianchi

Batman enters a funhouse full of Jokers from different eras.

“The Last Smile” by Paul Dini and Riley Rossmo

The Joker has a nightmare.

Joker assembles a birthday party with a very important lesson.

“No Heroes” by Eduardo Medeiros and Rafael Albuquerque

A man dreams of being Batman and repeatedly gets defeated by the Joker.

Joker is locked up in Arkham with Batman’s rogues.

As you can see, DC spared no expense in delivering talent and quality to celebrate 80 years of Batman’s greatest villain. If I had to pick a favorite of the bunch, I’d probably lean toward “Scars” and “Joker”. However, there isn’t a weak story in the lot.

THE JOKER 80TH ANNIVERSARY issue is a steep $9.99, but worth every penny (It’s not about the money, it’s about sending a message). 10 stories that give a variety of tales, but ultimately all fit perfectly in line with who this character is since his debut in BATMAN #1 in 1940.