SYNOPSIS: The greatest heist in history is underway in Gotham City, courtesy of the mysterious crimemaster known as the Designer! Batman knows what he needs to do, but in order to stop the plot, he must first escape the most ingenious death trap the Riddler has ever devised! 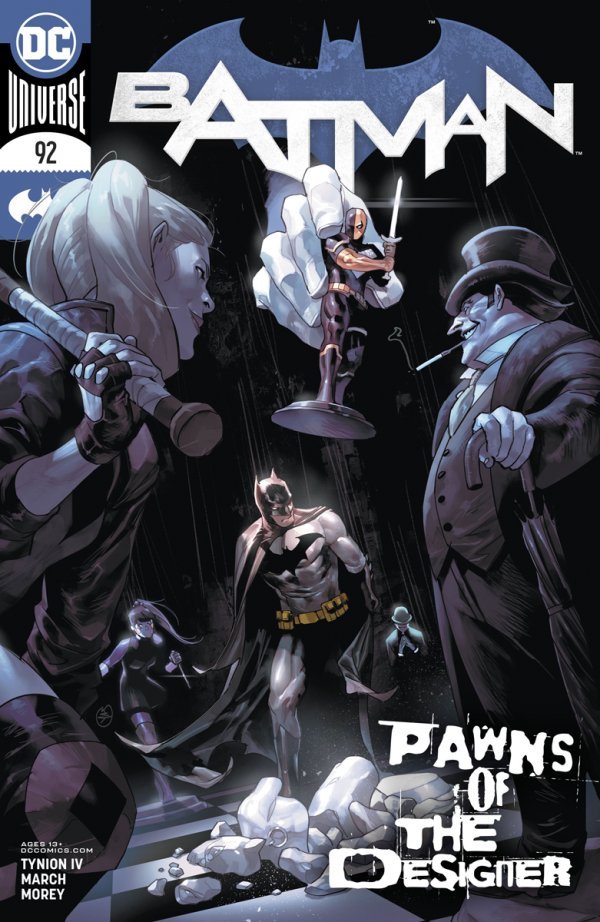 But here we are with the first issue of Batman’s flagship title since March.  Frankly, I had to go back and re-read my own reviews to re-get up to speed on just what the hell was going on in BATMAN before it went on hiatus.  So now that I’m up to speed, here’s what I thought about BATMAN #92…

Things are fixin’ to get really, Really, REALLY serious!

I’ll make this short and sweet…

Batman has conquered all obstacles in front of him — Deathstroke, The Penguin (What kind of hospital lets patients smoke?  Only in Gotham!), The Riddler (You’ll see how awesome it is in this issue!), and even the, *ahem*, stuff with Selina (Thanks Selina!).  But now it’s time for the showdown with the guy who has been pulling all the strings since the beginning…

Also, the Catwoman/Harley Quinn subplot continues as it appears that Selina’s plan/re-heist (Thanks Selina!) to save Bruce Wayne from total financial ruin is going to be a success.

And speaking of Harley, she comes face to face with The Joker’s new girlfriend, Punchline — who kinda-sorta makes her first full-on appearance other than a cameo in DC Comics.

Oh, this should be fun going forward!

Regardless, “Their Dark Designs” is going to come to an end as “Joker War” — the next big “event” in BATMAN — commences in issue #93.

Am I the only one who longs for the days where each issue of BATMAN, DETECTIVE, etc. was an individual, one-off tale from beginning to end? – Bill “Jett” Ramey