SYNOPSIS: Scorn’s plan is revealed, and it is nothing less than the reshaping of the structure of Gotham City. Where the Batman imagines a city without crime, Scorn wants a city built on it. The Batman can’t think like him, though-he’s half-dead already! 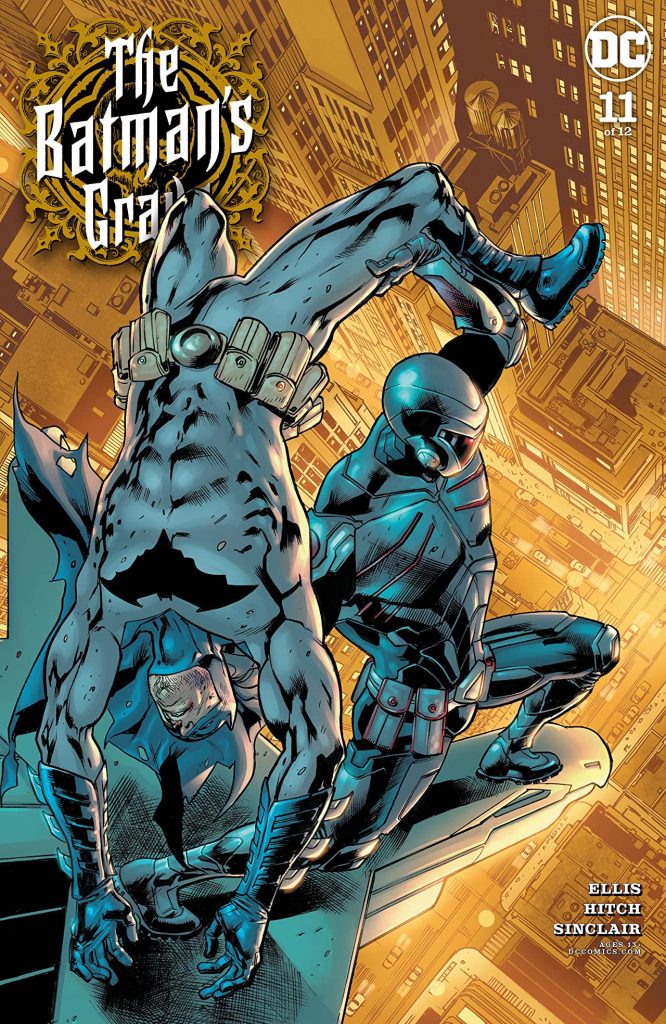 The penultimate issue of The Batman’s Grave starts off with a bang as the GCPD is under attack!

As to be expected, this issue is high on action with Scorn retaliating after Batman made his move to draw him out. Hitch doesn’t disappoint, delivering his trademark widescreen action with aplomb. Once the Dark Knight makes his entrance, the fight gets up close and personal between the two, not to mention downright brutal.

While they both get their respective licks in, Batman takes some punishment, including six shots at point-blank range. Yes, I’m going to point out again just how much I love every little detail and a bit of fight choreography Hitch throws in. Every punch has a purpose, weapons have more than one function, and even body armor can’t withstand the massive damage these combatants deal out to each other.

When the physical fight ends and both parties go back to their respective corners to lick their wounds, Ellis takes the reader back to a contemplative place, as the psychological warfare begins anew. Bruce and Alfred once again scrutinize their methods and Bruce retreats into his unique headspace to re-examine the scene of the crime.

Outside of the action, one of the things I will remember most about this series is how Bruce puts himself in the victim’s shoes. This time, he’s never been able to identify more. It’s fitting that he does so while looking in the mirror since his opponent is his own dark reflection. He’s figured out his plan, but Ellis keeps it from the reader for one last time.

As the Dark Knight heads into the final battle, he dons a new suit. Hitch seems to have taken influence once again from the films as this new costume has elements from The Dark Knight with a little of the tactical suit from Justice League for good measure. Batman is every bit The Dark Knight as he is about to mount his mechanical steed. There’s an air or foreboding as Batman and Alfred exchange a last, but hopefully not final, look at the issue’s conclusion.

Once again, this felt like a quick read due to the emphasis on action at the start, but Ellis gives the reader something to chew on in the back half, bringing up motifs and themes from throughout the series. How have Gotham and Alfred shaped Bruce? Who really is Bruce Wayne and can he ever be free from the war he doesn’t want to admit he’s in? Do the police make his struggle better or hinder it with their own methods? Why aren’t they more in tune with each other? Can Batman defeat his dark reflection without filling his own grave?

You better take one long, last look at The Batman. – Javier E. Trujillo