SYNOPSIS: Spinning out of the events of “The Joker War” and Detective Comics #1027 comes a tale of the beginning of the end for Gotham City’s status quo. With tensions flaring and a new mayoral candidate making his anti-hero agenda known to the city, Batman and his allies are stretched thin to keep the peace. But just as things couldn’t look any worse, a string of gruesome murders has left a trail of the most corrupt in Gotham City losing their heads…literally.  If Batman doesn’t quickly find the killer-the Dark Knight will be next. 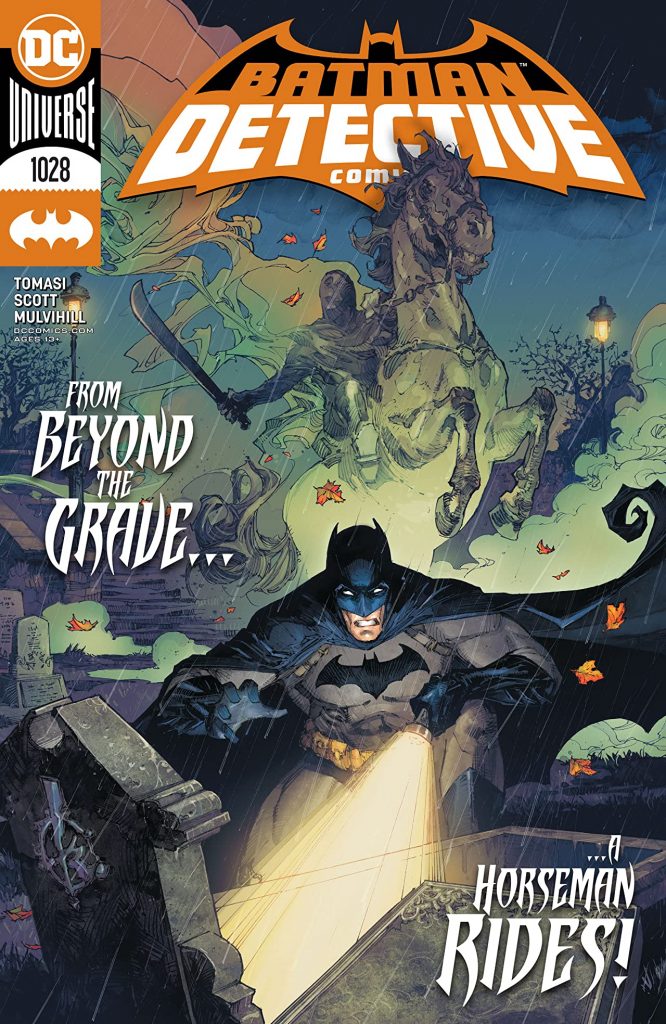 Now that “The Joker War” has come and gone, we can say goodbye to the tie-in issues that can at times handcuff a writer.  Here Tomasi crafts a story that feels more intimate than the latest DC mega-event we just finished.  With all-star artist Nicola Scott teaming up with Peter J. Tomasi this feels like those classic Batman books of the 1970s: small in scale but definitively Gotham City at its worst.

This is definitely not a tie-in issue; this continues the vintage feel we have been getting in Detective since Tomasi took over the title.   It’s been a while since we got a corrupt GCPD tale and this does not disappoint. This is just the story you want coming out of a mega event like “The Joker War.”  This isn’t some new villain trying to take over the city, this is a personal story.   A story about legacy and how one man gets justice confused with revenge.  The typical Tomasi Batman trademarks are ever-present, fine detective work, detailed due diligence, and the always disgruntled Harvey Bullock; all backed by a fine who-done-it mystery.  The two scenes in the book that stand out are Batman on location at the crime scene calling Bullock’s bluff and the final showdown.  Batman and our culprit share such a personal moment, but the Batman stands ever so stoic and perfectly righteous.

I can’t begin to tell you how excited I was when I found out that Nicola Scott was the artist on this issue.  Her artwork is nothing short of eye-popping, so crisp and clean.  Batman looks so bold whether it is him standing in the middle of a cemetery cape flowing or him gliding across the city, he has never looked better. Even simple panels, like Batman searching the GCPD evidence locker with a flashlight in his mouth, such a definitive Batman moment and such a splendid thing to see on paper.  Scott’s panel placement is magnificent, seven-panel grids dominate the book but not one is the same.  Scott’s squares and rectangles have just as much impact as her splash pages.  A feat that not many artists can accomplish, and she excels at it with ease.

I could not do the review justice without mentioning colorist Trish Mulvihill.  Mulvihill’s use of warm colors is something to note.  How Gotham City has this glow to it in the distance. The use of yellows, reds, and oranges set a tone unique to a Batman book.  Usually, Bat-books tend to be dark and dreary, but this has a different feel to it.  Gotham doesn’t feel bright and shiny like Metropolis but Mulvihill does add some depth and character to every page that really enhances Scott’s already brilliant artwork.  I personally would love to see more of this.

Tomasi weaves a mystery tale that will leave any Bat-fan pleased, combine that with the artistic talents of Scott and Mulvihill and this book goes above and beyond expectations. Tomasi crafts a fine introduction in this latest chapter of Detective Comics filled with personal turmoil and teasing what may come.  This is the new Gotham and the Batman will have to adjust.  This seems like it will be one enjoyable yet unpredictable ride.  You won’t want to miss this issue come Tuesday it’s the perfect mix of Batman and Sleepy Hollow for this Halloween season. – Peter Verra

THE BATMAN & THE SPECTRE: “My Father Who Art In Heaven”...