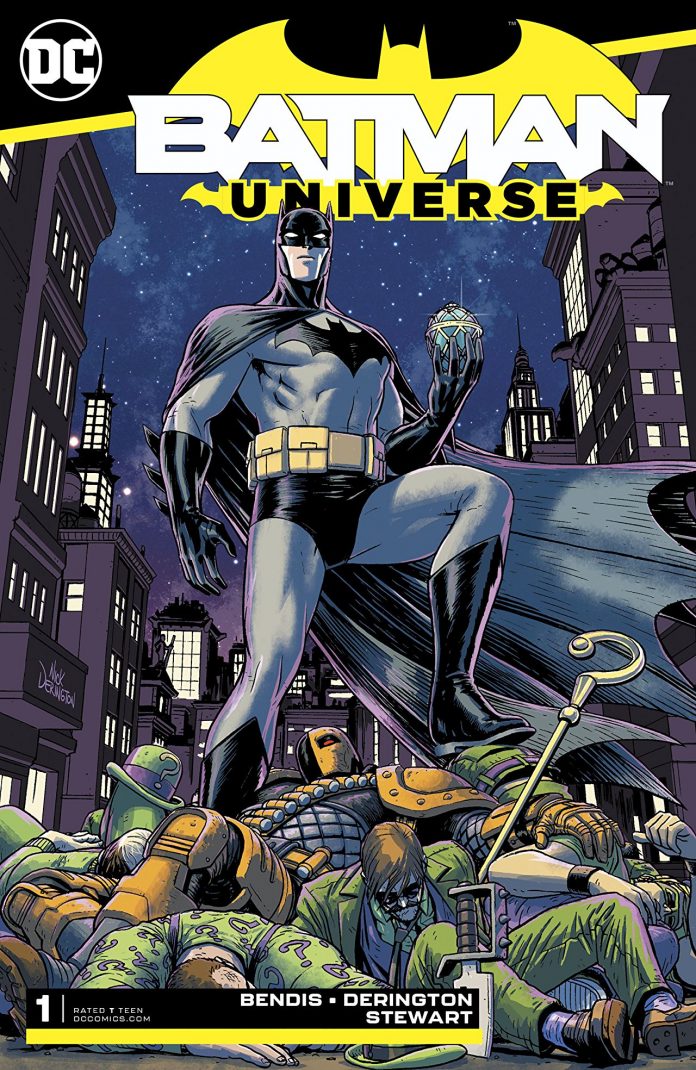 SYNOPSIS: Following the theft of a priceless Fabergé egg, the Riddler leads the Dark Knight on a wild hunt after its true owner: Jinny Hex, a descendant of Jonah Hex! Guest-starring Deathstroke, Green Arrow and dozens of Riddler look-alikes in stories by Brian Michael Bendis with art by Nick Derington, originally published in BATMAN GIANT #3 and #4!

For nearly an entire generation of comic book readers, the name Brian Michael Bendis was always synonymous with some extremely popular and even definitive comics book runs at DC’s primary competition, Marvel. Bendis was at the forefront of reinvention that elevated Daredevil to whole new audiences, spent the better part of a decade that brought The Avengers back to a level of prominence as a true team of Marvel all-stars, and wrote and co-wrote a plethora of Marvel event series that defined an entire era for those characters.

When it was announced he was jumping ship exclusively to DC Comics in late 2017, it’s hard to convey just how much of a potentially seismic shift a move like that could do for both DC and for Marvel. Marvel was losing one of the most prolific storytellers that it’s had in years, and DC was gaining that while providing him with a whole new canvas on which to play.

Naturally, the speculation surrounding who Bendis would write first focused squarely on Batman. DC’s most arguably popular icon, Batman being paired with Bendis seems a bit like a no-brainer, until it was revealed that Bendis was instead seeking to reinvent the Man of Steel, Superman, in a way not seen since the days that John Byrne had total control over that character’s destiny in the mid-to-late 1980s. Then, though, DC also announced a series of comics to be released exclusively at Walmart in a partnership between the comics publisher and the retail behemoth.

In a bit of a switch, current monthly BATMAN scribe Tom King would be publishing a Superman series, while Bendis would be writing one called BATMAN UNIVERSE. Finally, that series has come to the direct comics market, and all the weight of expectation that comes with the phrase “Brian Michael Bendis writes Batman” can start to be realized.

And…it’s alright. It’s certainly not bad, but it also feels a little out of place.

While it would be difficult for anyone to argue with a straight face that Bendis is deficient at his craft, this first issue of BATMAN UNIVERSE and his first solo, dedicated Batman story shows signs of a guy who just hasn’t written Batman all that much before.

The voice that Bendis uses for Batman does have a tinge of familiarity to it, but there’s also a bit of an odd formality to his tone — and even a degree of politeness — that stood out because it sounds just a little bit more like Adam West than you might expect. It doesn’t go too far in that direction, but it is present.

Still, the broad strokes of the story started here are fun, involving The Riddler and even featuring a couple of wider DCU guest appearances that will likely make any larger DC Comics fans intrigued at what the larger implications of this seemingly-isolated Riddler tale could be.

Coupling that fun with Bendis’ trademark ability to convey humor in his stories, and you have an issue that’s worth picking up, particularly if you’re intrigued about what Bendis might do with Batman in a monthly format.

BATMAN UNIVERSE does not appear to be a slowly-burning character study, nor is it a completely outrageous action spectacle if this first issue is any indication. It looks like it’s accomplishing what it aims to be as a standalone story that doesn’t require a lot of prior knowledge of the characters in order to fully jump aboard and see what Bendis cooks up here.

Couple that with the clean, stylized lines of penciler Nick Derrington and the terrific colors of Dave Stewart, and what you have is a good Batman comic book.

Nothing spectacular, but perfectly enjoyable if you find yourself needing a little more Batman in your life. – Chris Clow

SUPERMAN AND LOIS TV Series in Development at The CW