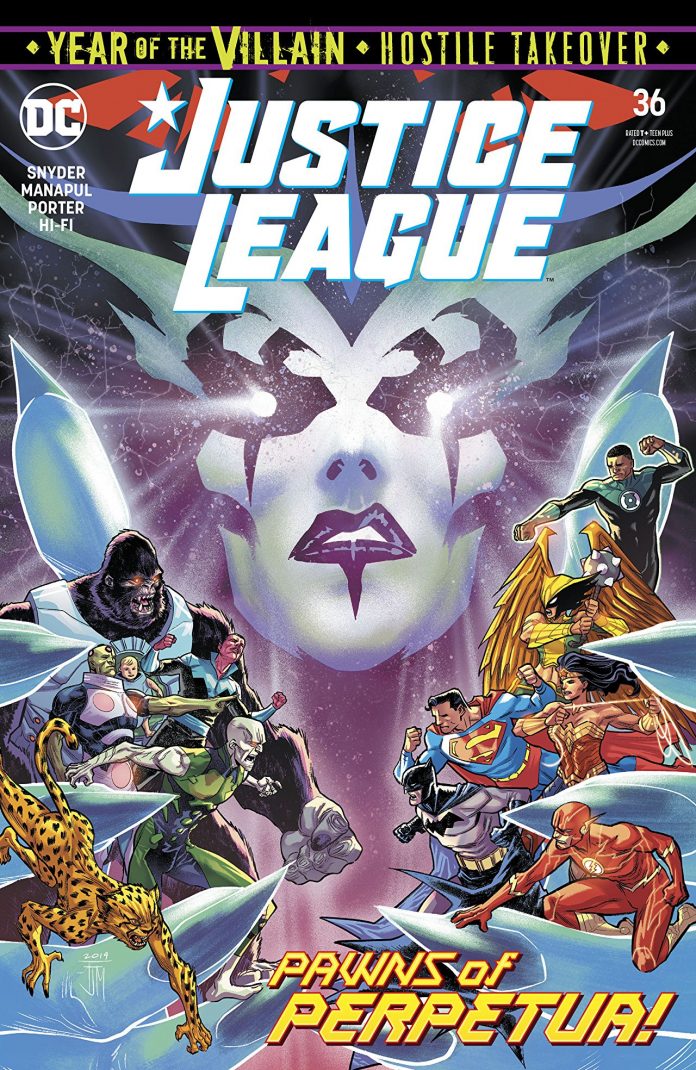 SYNOPSIS: How powerful is too powerful? Lex Luthor has assembled everything he needs to complete his plan of turning the world toward doom, including reviving the ancient goddess Perpetua and restoring her powers. But can he keep Perpetua from dragging the DC Universe into the abyss alongside the rest of the Multiverse? This is a question that hero and villain alike must ask, as the epic battle between the Justice League and the Legion of Doom across space and time comes crashing together. Everything that happens here sets the stage for the senses-shattering finale of the Justice/Doom War-and the fate of all existence hangs in the balance!

It’s almost impossible to say how long the storyline that has weaved its way through this run of Justice League has been going on. Scott Snyder has pulled so many elements from his time at DC into this multiverse spanning tale, along with pieces that existed long before he brought his talents aboard, that you can’t really identify a clear starting point. With Justice League #36, however, it’s becoming clear that we are reaching its endpoint.

All the battle pieces are in position. The ultimate showdown looms. Lex and his Legion of Doom are at Perptua’s side, ready to annihilate the League and the greater proponents of Justice, and we find Superman, Batman, and Wonder Woman searching for an answer to turn the tides one last time. Snyder has done a masterful job incorporating strong character work throughout his flashy space/time/existence web of a story and this issue is no different. There are some great conversation pieces with Shayne/Miss and Green Lantern/Flash later in the issue as well but the opening belongs to the Trinity. The three icons are forced to reconcile their actions and approaches with the reality in front of them, requiring them to do a bit of soul searching and examination of the role faith plays in their efforts as well as Lex’s.

As for Lex, his faith and loyalty are tested as his Goddess’s plans for his Legion turn out to be somewhat different than expected. However, as readers have long known, Lex’s desire for power reigns above all else and Snyder has crafted a surprisingly fulfilling turn in delivering Lex what he craves so much. It’s a story beat that will leave readers on the edge of seeing the moment coming without being disappointed with it being overly signaled in advance. While Snyder pulls together all the strings of his plot he also more clearly conveys his larger theme in this issue: our heroes have won against all odds previously based on their faith in justice and their actions in the face of doom have not measured up as well.

The one downside of the issue is in the artwork, which isn’t poorly done. Francis Manapul and Howard Porter share the duties and do respectable work on their own. However, the transition back and forth between their pages is a bit jarring and their styles are not incredibly well suited for the split assignment. In places, the work is really well done, in others it feels a bit rushed. It certainly feels as though this was an issue of scheduling rather than a stylistic choice. The colors by HiFi are excellent as ever.

Overall this is yet another impressive installment of Justice League and what seems to be the final set up to the conclusion of an even more impressive storyline. Do not miss it. – Garret Grev

Lost Footage of Adam West as Batman in 1967 UK PSA