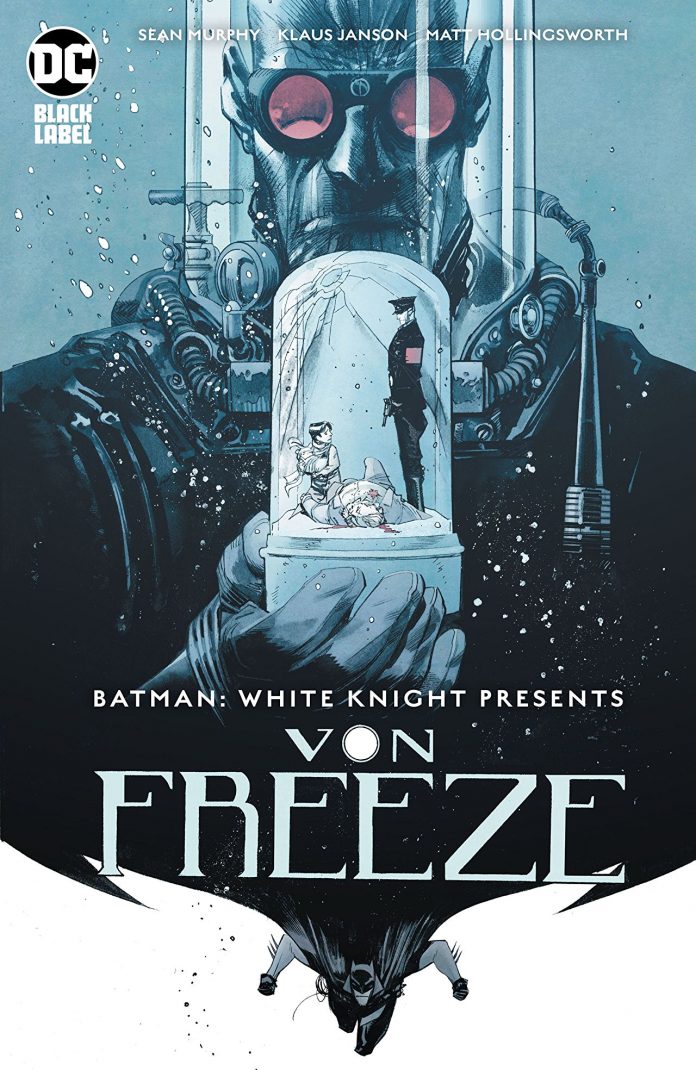 SYNOPSIS: The world of Batman: White Knight expands with this standalone tale! On the night of Bruce Wayne’s traumatic birth, Victor Fries must intervene to save the lives of Martha Wayne and the future Batman. As the evening unfolds, Victor distracts Thomas with the incredible tale of his own father figures-one a Nazi, the other a Jew-and their complex connection to Wayne Laboratories. As the Third Reich roars into power, the deep friendship and working relationship between the Baron von Fries and his research partner, Jacob Smithstein, is in crisis. Ordered by Himmler to speed development of their cryotechnology in service of world domination, Smithstein is forced to go into hiding and compromise his moral code in order to save his wife and infant daughter, Nora, from persecution and certain death. When the S.S. ramps up surveillance over the project, young Victor begins to question his father’s true allegiance. Both families are driven toward an impossible choice and a sinister standoff, and Victor makes a pact with Smithstein that will ripple through generations.

BATMAN: CURSE OF THE WHITE KNIGHT takes a month off to present a tie-in, one-off story this month. VON FREEZE presents a little backstory on the Freeze family in Sean Murphy’s WHITE KNIGHT universe.

The writer/artist has said he views this issue as a “deleted scene” of sorts. In the timeline, it would take place in between issues 6 and 7 of CURSE and will be referenced.

Now to dive in.

VON FREEZE is a fantastic story. No bones about it. It has heart, depth, betrayal and fantastic art. Murphy scripts an old story that takes place during World War II, and tackles the tough subject of Nazi Germany and its horrible treatment of Jewish citizens. What we unravel is a connection to Nora, a heartbreaking betrayal, intense drama and links to the current Batman story we’re in the middle of.

Murphy does a wonderful job here of reeling us in to care about all of these new characters. His Freeze in the Murphyverse has been less of a villain, but still true to character in serving his own needs. So we’re not surprised at the backstory of his childhood but are surprised at the actions of his elders, both good and bad. As I mentioned above, there is a betrayal that I didn’t see coming, and made it even harder to digest. I don’t want to give anything else away.

Murphy does take a break off from drawing and brings in the legendary Klaus Janson. He is on-point as usual, with a distinct visual style that helps bring the emotional waves to the surface. A unique touch was also in the usage of Ben-Day dots, which is a cool nod to comic book printings of the past (if you aren’t sure what I’m talking about, give it a Google).

If you have cold feet on spending $5.99 for a tie-in, chill. This issue is definitely worth your money. It’s an emotional, powerful story with excellent art. Buy it now. – Ryan Lower