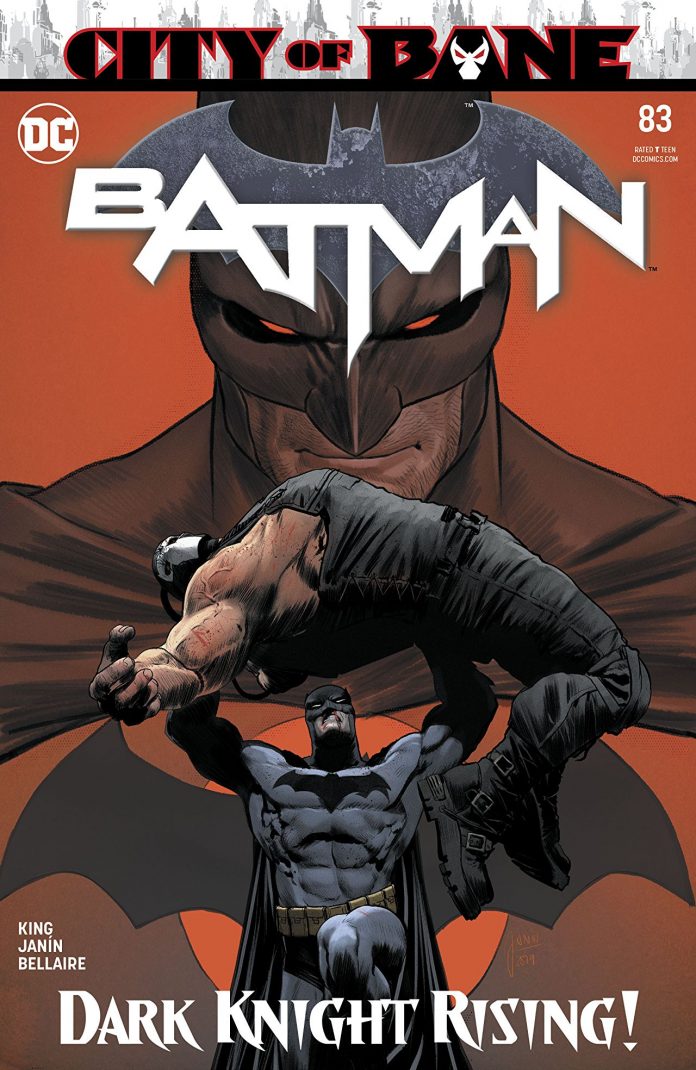 SYNOPSIS: It’s chapter nine of “City of Bane,” and it’s time for a reckoning in Gotham City! Thomas Wayne has joined forces with Bane, and that alliance threatens to throw a monkey wrench into Batman’s plans. And as Bane’s evil army begins to crumble, the Caped Crusader must face the real force behind it all. As the end of this epic tale grows near, Batman and his allies have a choice: let Bane stay in power and guarantee the city’s survival, or risk everything to break free!

In BATMAN #82, Bruce Wayne triumphantly hoisted a bloody Bane above his head and prepared to make good (finally!) on his longstanding promise to break his tormentor’s back. But the words “Batman” and “victory” haven’t belonged in the same sentence in these pages for quite some time…unless that “Batman” is Thomas Wayne, whose violent act of Fisticufftis Interruptus left his other-dimensional son and his Santa Priscan partner-in-crime even bloodier than they’d already made each other.

When Bruce regains consciousness here, he’s fully dressed in his Batsuit and apparently no longer bleeding profusely from the two gunshots Thomas delivered to his guts. (Did I misinterpret something in the final panels on the last two pages of #82? Bruce takes two shots in one panel, is bleeding from two spots in the next, is then seen lying bloodless beside Bane, and is finally shown lying in blood again. Now he’s apparently fine. Apparently.)

Sitting across from him at the other end of the Wayne Manor dinner table is the corpse of someone close to him, which sends Bruce into a teary-eyed cyclone of sadness that blooms into a blustery hurricane of rage that culminates in yet another big confrontation that promises yet another round of punching…that we’ll yet again have to wait another two weeks for.

More on that later.

As Bruce tenderly tends to his friend’s dead body and plots his way out of this latest cage, writer Tom King narrates the pages with a beautifully written letter from the departed that lovingly loops back around to King’s first issue from over three years ago. Mikel Janín’s pencils and inks flourish under Jordie Bellaire’s silvery blues and rosy pinks as orange flickers dance atop the candles in the chandeliers. Janín displays Bruce’s emotions capably and powerfully, both in and out of the cowl. We ache with him, and we wither beneath his rage. Bellaire’s background blacks keep the feelings front and center, and her subtle uses of color that highlight silent sentinels soon blossom into hotter hues that preview the latest battle in this already impossibly prolonged war. As always, this is one of the best looking comic books on the market from every possible angle.

But the story itself won’t win back anyone who’s already abandoned the title, especially when the teaser text for next issue promises something other than the latest brawl this one’s “ending” does. And anyone expecting the cover’s promise of a “DARK KNIGHT RISING” won’t find anything of the sort inside; Bane doesn’t appear at all, and Bruce’s victory still seems ages away.

In that regard, King is certainly succeeding. – John Bierly