SYNOPSIS: Tom Hanks portrays Mister Rogers in A Beautiful Day in the Neighborhood, a timely story of kindness triumphing over cynicism, based on the true story of a real-life friendship between Fred Rogers and journalist Tom Junod. After a jaded magazine writer (Emmy winner Matthew Rhys) is assigned a profile of Fred Rogers, he overcomes his skepticism, learning about kindness, love and forgiveness from America’s most beloved neighbor. 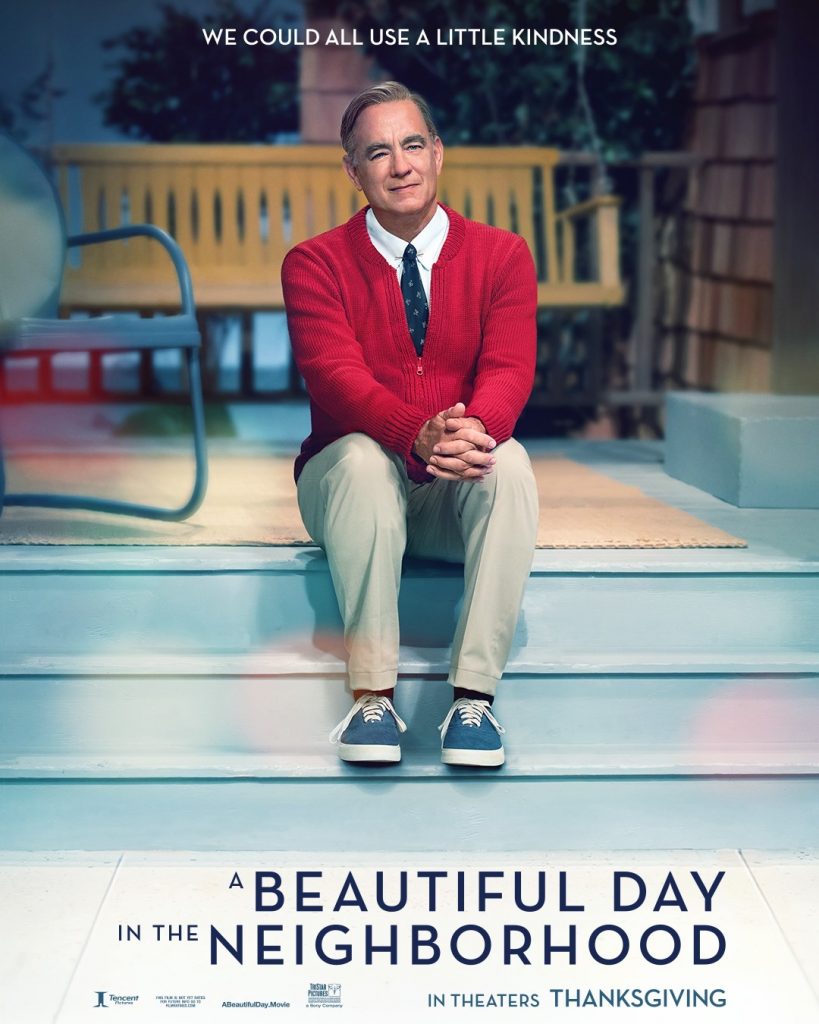 Here At BOF we love our superheroes!  Batman, specifically.

A Beautiful Day in the Neighborhood brings us a different kind of superhero — a real-life one!

Director Marielle Heller brings us not a biopic, but an engrossing look at the beloved Fred Rogers told around the story of a cynical investigative journalist with some colossal anger issues. The story is based on an article from Esquire Magazine in 1998, “Can you say . . . Hero”, written by real-life journalist Tom Junoud. Because it’s been fictionalized, Junoud’s character is called Lloyd Vogel in the film and is played by Matthew Rhys.

The iconic Fred Rogers is skillfully played by Tom Hanks, who’s already earned Oscar buzz around his portrayal. It’s difficult to represent a real person on screen, and to Hank’s credit, he doesn’t try to imitate Rogers. Instead, he reveals the character through posture, gestures, and voice tone and cadence. The result is both moving and authentic. By the way, the screenplay was written with the blessing and help of Joanne Rogers, who survives her husband. Mr. Roger’s Neighborhood ran on PBS from 1968 – 2001.

The film takes place in 1998, 5 years before Roger’s death in 2003. The story arc begins when Lloyd Vogel is asked by his editor Ellen (Christine Lahti) to write a brief piece on Mr. Rogers — a far cry from the usual exposes he usually writes.

The cynical Vogel thinks there must be something bogus about Mr. Rogers because no one can be that virtuous, right? Therefore, his approach is suspicion tempered by condescension.

His wife, Andrea (Susan Kelechi Watson) who’s at home with their newborn son, begs him not to attack the beloved Mr. Rogers, but she obviously believes that Lloyd will approach this article as aggressively as he usually does.

Lloyd’s anger issues stem from being abandoned by his father Jerry (Chris Cooper) when his mother was dying. He has not spoken to him since, nor does he want to. A dilemma arises when his sister Lorraine (Tammy Blanchard) invites their father to her third wedding. Lloyd, at first, refuses to go, but his wife convinces him that he should. Jerry wants to reconcile with his adult children, and Lorraine has asked him to walk her down the aisle.

Prior to Lloyd’s story, a mock-up of the Mr. Roger’s Neighborhood set allows Mr. Rogers to introduce his “neighbors” to a new neighbor who needs help with his sadness. Throughout the film, sets begin with model mock-ups that morph into the actual settings.

Lloyd visits the set of the show and manages to get only a few minutes with Fred Rogers. Rogers is so sought-after and popular that he has a handler/scheduler, Bill Isler (Enrico Isler). Lloyd ends up following Rogers to various events, interviews, etc.

As Lloyd’s struggle with his daddy issues unfolds, so does the personality of Fred Rogers. As Lloyd watches Rogers work, meet people, really listen to them, and view the positive changes in many of them, he begins to soften a bit. Vogel’s transformation follows several difficult situations that test his ability to change. But there’s no denying the positive effect of Fred Rogers as Lloyd begins to understand the man’s integrity and authenticity. I’ll leave the outcome for you to discover.

A Beautiful Day in the Neighborhood benefits from an extraordinarily strong cast and just enough suspense to keep the story from being mawkish.

Roger’s wife Joanne (Maryann Plunkett) serves as the vehicle for revealing Mr. Roger’s faults and problems thereby negating the public’s tendency to think of him as a saint. The story doesn’t dwell on them, but it’s just enough to show us Fred Rogers, the man behind the myth.

This film is not a documentary. There is a very good one, Won’t You Be My Neighbor, if you prefer just the facts. I personally loved how a story of several persons in emotional pain showed us an extraordinary man.

The best lesson I learned from the film is the power of thoughtful silence. If you want to know how a film with that characteristic doesn’t just drag along, I recommend you see A Beautiful Day in the Neighborhood. – Jo Hyde

From the Uslan Vault of DC History, Ch. 7 by Michael...