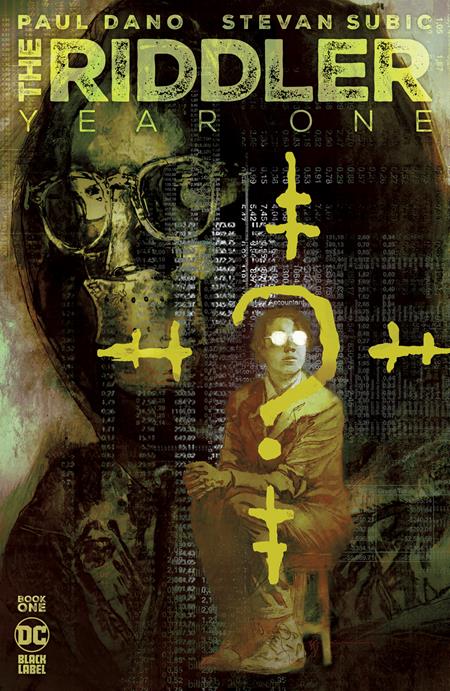 I’ll admit, I wasn’t sure how well it would work out to have an actor writing a comic book detailing more of the backstory of the character they played.  For the record, I think Paul Dano’s performance as Edward Nashton/The Riddler in The Batman was fantastic, one of the best Batman villain portrayals (and by extension one of the best comic book movie villain portrayals) ever.  And the story is actually developed from Dano’s ideas about the character’s backstory that he put together while prepping for the role.  But does that mean he’s well-suited to tell us more of Riddler’s story? He wrote and directed the film WILDFIRE, but THE RIDDLER: YEAR ONE is his comic-writing debut.

I’m glad to say that so far, it does.

With art by Stevan Subic and lettering by Clayton Cowles, Riddler: Year One is a solid entry in the growing Black Label line of DC books.  We’re only one issue in so there’s plenty of story we don’t know yet, and there are minor things to nitpick about some of the visuals, but overall, this is a good start and a pleasant surprise.

As the book begins, Edward Nashton is struggling.  In Riddler: Year One we see him dealing with panic attacks, self-loathing, suicidal thoughts, feelings of inadequacy, and serious depression.  In fact, the book opens with Edward blacking out and reminding himself to breathe, and keep breathing, as his panic turns from strangling darkness to demonic hands slowly loosening their grip, if only temporarily.  What keeps the panic at bay?  His work, or more specifically, his work with numbers at his accounting job, where he is a professional puzzle-solver of sorts.  As he snaps back to reality, assuring himself that he’s okay, we meet the other major character in this first issue, Edward’s case leader Zach.  Edward reminds himself that Zach has only been on the job for a few months compared to the years he’s been working, but Zach has been promoted and now Edward reports to him.  A quick conversation between the two (against the backdrop of an office party that Ed either doesn’t attend or wasn’t invited to) tells us that Mr. Nashton is brilliant, hard-working, and being taken for granted.

We also see the future villain making his way around Gotham, listening to motivational speakers in his ever-present ear pods, wondering how he can ever survive in this city.  He walks home past gangs, corrupt businessmen, happy young couples, and Wayne Tower, the symbol that ties it all together, at least from Edward’s perspective.  “Why is it so easy for some, and so hard for me?” he asks his imaginary podcast friend, as he imagines throwing himself in front of a train before having another panic attack.

So yeah, he’s got problems.

But he does find refuge in one place: an online social network/gaming site called “Nigma,” a place he can go and be himself.  He’s an anonymous legend there, known only as “Puzzle King.” and it appears to be his only source of real affirmation.  It’s also where he first hears about a bat vigilante, who inspires him to try and do something about his life.

The story really kicks into gear when he receives a new assignment at work.  He’s tasked with investigating accounts related to an animal rescue called New Beginnings, and he immediately notices some suspicious activity.  This sparks a glimmer of hope when he imagines reporting his work beyond Zach directly to the higher boss, Mr. Stone.  Not long after that, on his way home he sees a woman being attacked, and he gets to see a certain hero in action, inspiring him even more (and of course, his first response is to get on Nigma and post about it, telling his fans there that the vigilante is “HOPE incarnate”).  This is a turning point for Edward, and he decides that if Batman is going to clean up Gotham, he can too.  But when Edward tries to go to Mr. Stone with what he’s found, he’s rebuked and turned away.  Then when he tries to learn more about Batman by listening in on a criminal trial, he learns that New Beginnings has mob connections, and his accounting firm may be involved as well…

So, to recap and give my impressions:

The story:  Good so far, but I want to see where it goes.  There’s not much to go on yet, but there is a cool appearance by our favorite hero.

Characters: The strong point so far is the character development of Edward.  He’s got a lot of problems, and you can see where he’s headed in a tragic way.

Art:  it mostly works.  Some of the work is in a realistic style, while other panels have a surreal feel.  The blend works at times, but at other points, you wish it would go one way or the other.  Edward especially looks like he stepped out of the movie, but the other characters don’t look as real.  However, the visual portrayal of his mental state is really well-done.

Nitpicks: It’s a Black Label book, which means they can include more adult content, and in this issue, it’s really only the language, which gets a little too close to being edgy for the sake of being edgy.  But if the allowance for more adult content is how they show Edward’s deteriorating mental state, we could be in for something memorable. – Trey Jackson