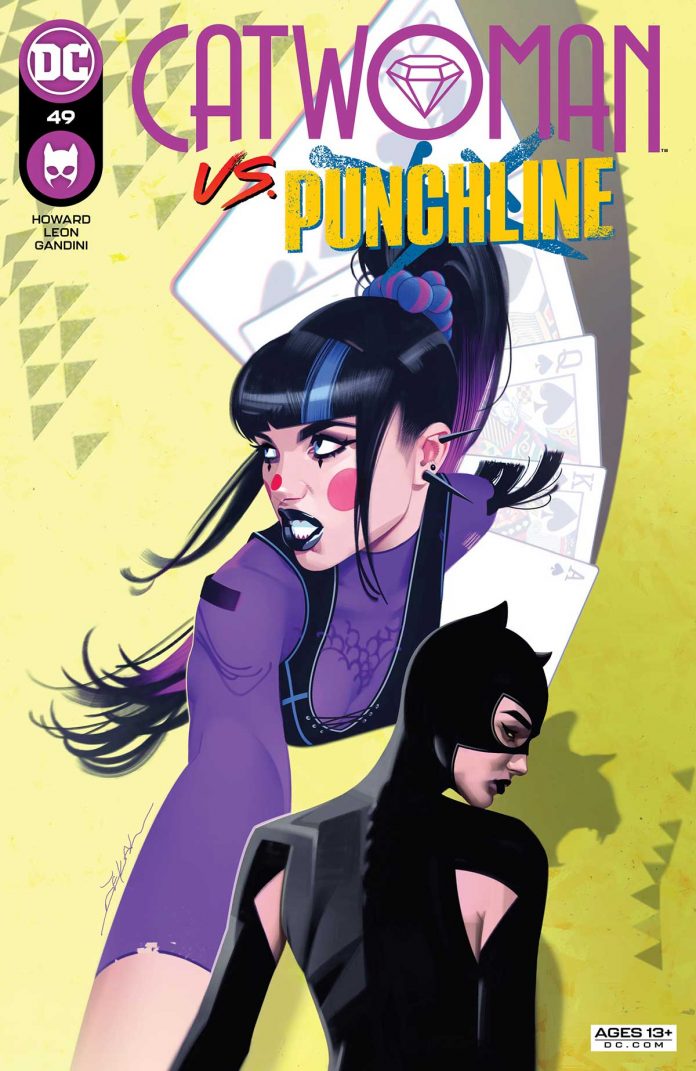 SYNOPSIS: You can take Gotham out of the cat, but you can’t take the cat out of Gotham. With some of Catwoman’s power structures collapsed again, a clan of clowns has invaded Alleytown and Selina must use her power to handle things safely…without bringing more violence and crime into the area she loves and swears to protect. But when that fails, Selina realizes she’s going to have to fight fire with fire once and for all.

Let’s start off with the cover.

While the image itself is fine, it’s promising something that really isn’t delivered in the issue. Catwoman does fight Punchline’s goons at one point, but Fake Harley herself doesn’t make an appearance. So, for those hoping for a fight between the two, one that this story doesn’t feel like it has been building to anyways, you may be disappointed.

What this issue does have is its fair share of action with a touch of romance for good measure. The opening chase is adrenaline-fueled, with exciting art provided by Nico Leon. Speed lines abound, adding a dangerous sense of motion as colors blur by. The angles on the layouts are pitch-perfect, with some interesting angles that put you right in the middle of the action. This is good stuff!

The colors are a big part of why this book looks so good. Done by Veronica Gandini, her coloring supports the art so well, particularly the neon glow of the Gotham night. Be it the lights from a building, tail lights streaking by, or the glow of a phone, this book pops, even when certain things are drenched in darkness.

Howard has me invested in these characters and we get to tag along as Selena checks in with Dario, whom she finally saves, Billy from Alleytown, Eiko, Valmont,…and Batman. Howard examines Selena’s thievery and why she puts her neck on the line. There is a definite complexity here and while she may be seen as being on the wrong side of the law, she certainly cares about a lot of people and takes care of them, making her a leader by example.

I mentioned romance before and yes, Selena does get very intimate with Valmont, but Bruce is very much in her heart. Howard has Selena refer to them being on a break, one where they are allowed to be with other people, or at least Selena says she hopes Bruce is out there meeting other people. What’s really interesting is how she views Batman — not as an ex, but as her future. When she does run into her proclaimed future later in the issue, there’s a poignant moment where Batman asks if they should go somewhere without the masks and Catwoman shies away from that idea. Her internal monologue lets the readers know why and Leon sells that emotion with his art. It’s a fantastic character moment, yet so small at the same time.

With each month, Catwoman is a book I am finding myself more and more invested in. Perhaps the solicits and covers don’t quite match up with the issue’s contents, but there is some quality storytelling and rousing action. The trip down to Alleytown may be dangerous, but it’s worth it! – Javier E. Trujillo