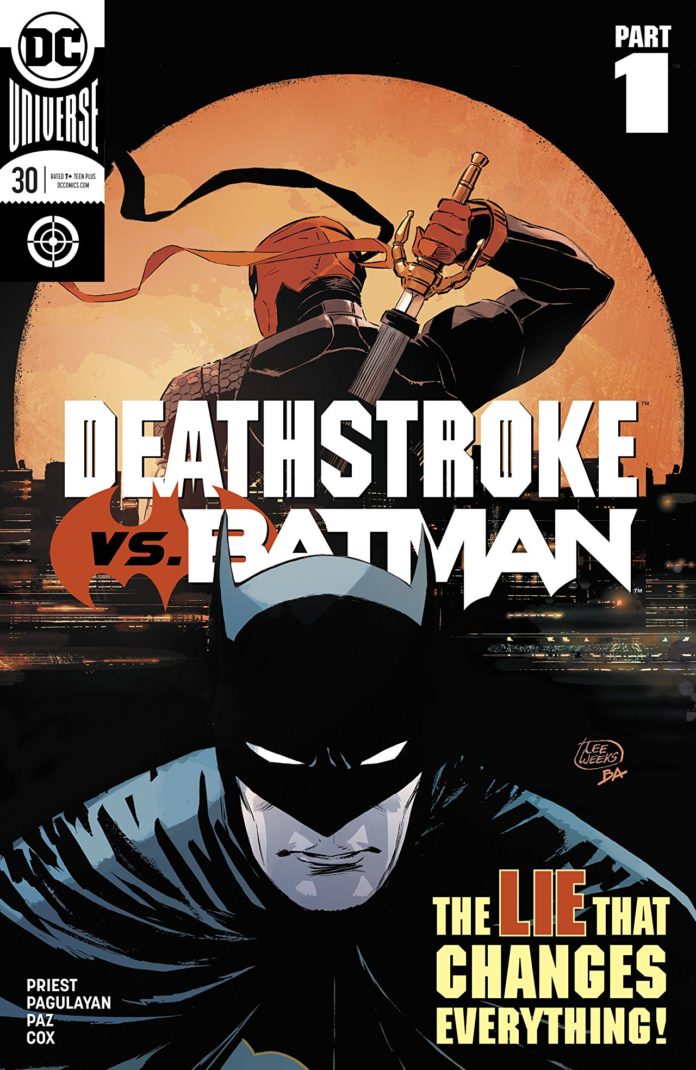 SYNOPSIS: “DEATHSTROKE VS. BATMAN” part one! Beginning this month, a six-issue series-within-a-series featuring the ultimate showdown between DC’s fiercest rivals! When Batman discovers a mysterious package containing DNA test results proving that he is not Damian Wayne’s biological father, the Dark Knight sets his sights on his son’s true father—Deathstroke! But Damian Wayne can’t really be Slade Wilson’s son—can he? And who sent the package—and why? The ultimate custody battle ensues as the World’s Greatest Detective and the World’s Deadliest Assassin clash in this instant classic!

Pardon me for being a bit late BOFers.  I just read Deathstroke #30 and it is phenomenal “Deathstroke vs. Batman” is something a long time coming for not only Batfans, but also fans of the DCU.  Ever since Ben Affleck dropped that video of Deathstroke — for his never to be made Batman film — we have been craving a showdown between two of the most skilled combatants that the DCU has to offer. Priest has been on his A-game with Deathstroke, and this is a book you will not want to miss.

What really stands out with Priest’s writing is how he is showing the parallels and similarities between the two; whether its Alfred/Wintergreen or Robin/Jericho.  It’s how they plan their tactics, the two of them are almost too smart to fight each other.  One has a plan and the other does exactly what he needs to counter attack.  The book has three scenes that really stand out. The opening of Alfred and Wintergreen makes me wish we could see Jeremy Irons do this in live action.  Truly, this is one of the best interactions I’ve read in a long time.  The Robin/Jericho flash backs describing their mentor/father were a tremendous deep look into the minds and opinions of their superiors.  Then the action sequence at the end is everything you thought it would be. Batman and Deathstroke matching wits and fists in a free fall down a sky rise.

Carlo Pagulayan who did a fantastic job draws the interior artwork.   The art reminds me of the artwork of One Year Later by Lenard Krik and Don Kramer in Detective and Batman respectively.  The Batmobile scene is a fun action packed chase scene. I for one love the hybrid Batmobile, part Anton Furst part BTAS, the best of both worlds.  The Gordon scene investigating the vault robbery gives me flashes of Gordon and Batman in TDK.  The free fall fight was great with some gorgeous splash pages of Deathstroke.  Jason Paz and Jeromy Cox provide the inks and colors respectively and should not be forgotten as well.   The book is just beautiful to flip through as much as it is to read.  What a great job over all from the artistic team.

Priest is one issue deep and I am totally invested in this story.  I recently posted on the BOF Facebook Page that I was reading this and a few asked me if the book was worth it.  The simple answer is HELL YES!  I’m over Affleck’s film that we won’t get because this is already better than expected.  Batman vs. Deathstroke is always a pleasure, no gimmicks, no magic, and no aliens.  Just two guys who train themselves to peak physical and mental perfection with a writer who is as badass as they come.  I have a feeling these two might just end up working together before this story is finished.  Priest has something special up his sleeves and we are just getting started.

The next issue drops 5/2/18 until then BOFers! – Peter Verra