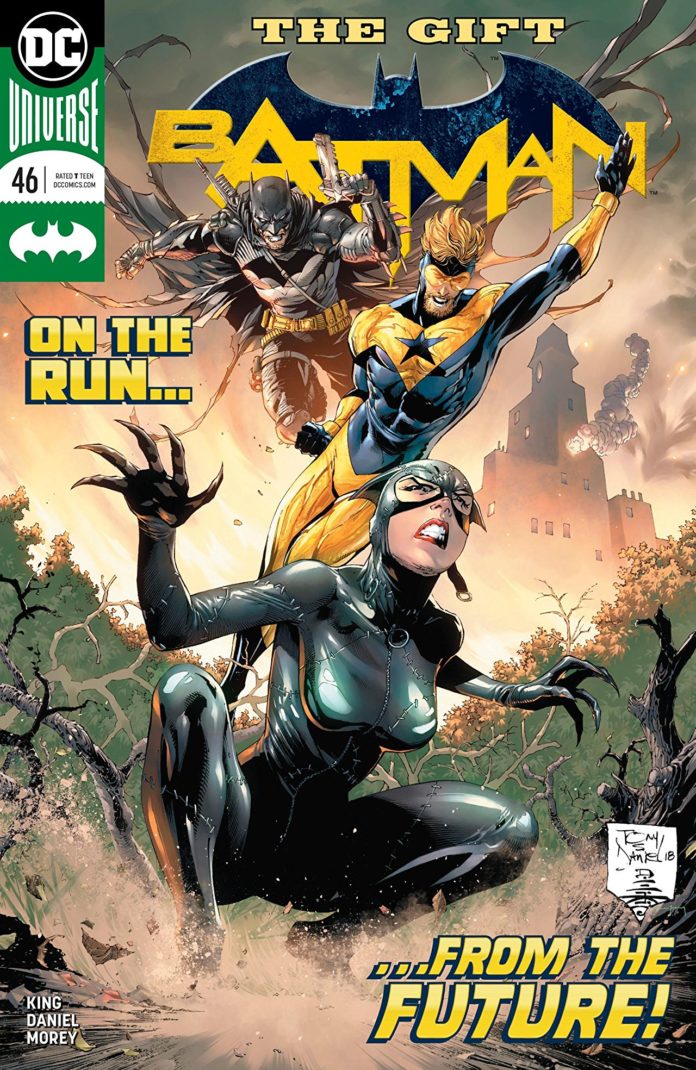 “THE TRAVELERS” part two! Booster Gold’s wedding present has screwed up Batman’s past, and done even more damage to his present. Now, with the Caped Crusader himself refusing to cooperate, the only way for Booster to correct this runaway timeline is to get Catwoman on his side. But with her own past altered, can he make Catwoman recognize the qualities in her husband-to-be that brought them together in the first place? Plus, if Batman isn’t doing his job, Gotham City may become way more dangerous than our bumbling time-traveler might be ready for.

In BATMAN #45, writer Tom King had Booster Gold and his robot buddy, Skeets, go all Alan Moore on Bruce Wayne by giving The Batman his very own version of the Man of Steel’s “For the Man Who Has Everything” as a wedding gift.

It did not go well.

Issue #46 begins “One Year Later.” Skeets is still scuttled, leaving a bearded Booster to desperately try to make things right in the alternately reality his meddling made. Thomas and Martha Wayne are alive and well. (Or at least mostly well.) Bruce Wayne never became Batman… but someone else did. So if a wedding was the impetus for the bad business Booster’s bungling brought forth, then surely a wedding can fix it, right?

The question, then, is where is Selina Kyle? She’s in the same place she was when Tom King’s Batman run began: Arkham. Booster bounces her out of the asylum…but is she still the kind of girl you’d bring home to Wayne Manor? The other Batman isn’t amused by her freedom, but you know things are bad when being hounded by a Batman is the least of your worries. The immediate romance Booster had been hoping for upon introducing her to Bruce doesn’t happen. Other things do. And if you thought issue #45 was bonkers, well, I’ve probably said too much already.

So let’s discuss the things we can. Such as the art, which is another stellar showing by longtime Gotham City citizen Tony Daniel. His pencils (with inks by himself and Sandu Florea) have never looked better to me than they do in these pages, from his densely detailed cityscapes to his action-packed body movements to his emotion-filled faces. I mentioned in the last review how colorist Tomeu Morey’s palette looks as if it leaked right out of a color-baked Michael Bay Blu-ray, and he continues to work his magic on the reddish-brown buildings and teal and dusky orange skies you’ll see here. My favorite colors are in the interior of a church, and I love how he contrasts the sewn black lines of Selina’s costume (which references Michelle Pfeiffer’s) against the industrial thrum of the city that seethes behind her. I’ve always liked Daniel’s work, but he’s working on a whole other level here that his collaborators complement with handsome and dramatic results.

Many of us are just eager to see if the nuptials are even going to happen. But as weird as this detour is, it never feels like padding or wasted pages. As crazy as it’s been so far, I hope King gets even crazier before “The Gift” concludes. – John Bierly