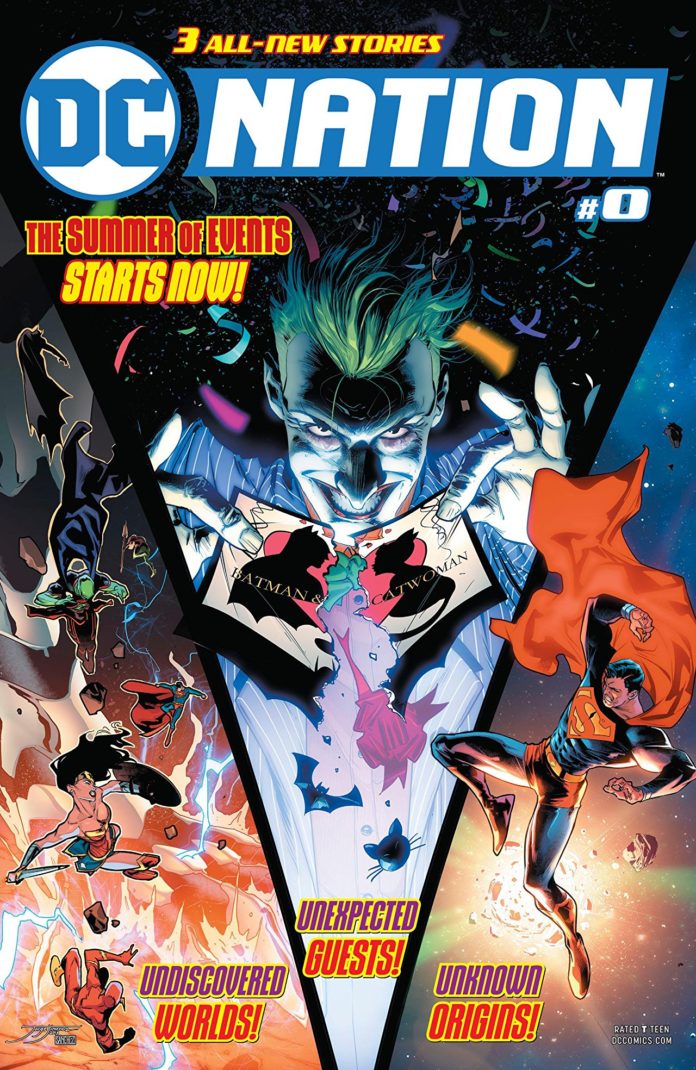 Just in time for Free Comic Book Day, this special comic features three brand-new stories from a lineup of superstar talent—and each tale serves as a prelude to some of the biggest DC events of 2018!

First, find out how The Joker reacts when he discovers Catwoman has turned her back on crime and plans to marry his archnemesis. Can the Clown Prince of Crime stand to see Batman happy? Writer Tom King and artist Clay Mann set up the events that lead to BATMAN #50!

Then, DARK NIGHTS: METAL shook the DC Universe to its deepest foundations—now it’s time to rejoin legendary writer Scott Snyder, along with all-star artist Jorge Jimenez and co-writers James Tynion IV and Joshua Williamson, for the prelude to JUSTICE LEAGUE: NO JUSTICE! Discover what universe-shattering mysteries have emerged from the most wondrous and chaotic corners of the cosmos to hunt the Justice League in DC’s summer blockbuster event!

Plus, get your first glimpse at Superman’s new world in this exclusive preview of the upcoming six-issue miniseries MAN OF STEEL, written by Brian Michael Bendis with art by José Luis García-López. With Truth, Justice and the American Way all under attack, both Superman and Clark Kent find there’s never been a more important time to stand up for what they believe in.

In a rather brilliant move, DC is selling a comic this week for only a quarter. That’s right, two dimes and a nickel. Five nickels. Twenty-five pennies.  OK, you get it. The point is, 30 pages of comic goodness for really cheap. Everyone wins because us fans get introductions to three highly-anticipated comic events this summer. DC on the other hand gets us hooked where we’ll come back for each series.

In this week’s DC Nation #0, an impressive roster of storytellers come together to provide a hell of an issue for anyone who can spare $.25 (I still can’t get over the price). We have Tom King, Clay Mann, Brian Michael Bendis, Scott Snyder, James Tynion IV and more giving us a great peak behind the curtain of what’s coming in the DC world.

As mentioned above, this issue is split into three stories. The second story is a tease for Man of Steel from Bendis and company. It’s a quick introduction that plants a few mysterious seeds, and a big question mark by the story’s end. Our third story teases this month’s Justice League event from Snyder, Tynion and others. As promised by the epilogue in Metal, the Justice League have split up into four teams and are traveling the universe to take down a massive threat. If you were into Metal, this is right up your alley.

Let’s rewind and go back to the first story of the issue (this is a Batman site after all). King and Mann come together for 7 pages of hell in “Your Big Day”. The Clown Prince of Crime has heard of the wedding of the century (Batman & Catwoman) and is REALLY excited. So excited, he’s waiting for his invite at Roger Martello’s house. Who’s Roger Martello? Nobody, which is why it’s perfect. Why would Batman send Joker’s invitation to Roger’s home?

King nails The Joker in this short, short little tale. These 7 pages are setting the table for the main course meal that is Batman #50 in July. The Joker here is funny, kooky, and scary as hell. I hope this is what we’re getting from King and company this summer (and there’s no reason we should doubt it). I adored him in this issue. His taunting of this random man, who we feel for in such a short amount of time, is as on-point as I’ve seen the character in recent memory (White Knight excluded). You don’t know what he’s going to say, or do, in any panel. By the end of the story, you end up shocked yet you aren’t surprised. King performs a great balancing act to get us invested in how The Joker is going to act on Batman’s big day (I highly doubt he’ll forever hold his peace).

With such a short story to tell, the art is equally as important as the script. Mann didn’t have to do much to get us on board, but he’s not messing around. That first image is terrifying, haunting, and hilarious. I was hooked from there. But then as we keep reading, we’re carefully led from panel to panel, with tension building to a near-anxiety level. However, every page is bright, colorful and gorgeous. All comic art takes time and focus, but Mann makes it seem effortless.

DC Nation #0 is definitely worth your time and money. While most fans will be ecstatic to get a look at all three stories, the first is worth it alone. King is teasing us big time with what’s to come, and if it’s more of what he delivered here, I’ve got a wedding to RSVP to.

Speaking of, I better go check my mail. – Ryan Lower