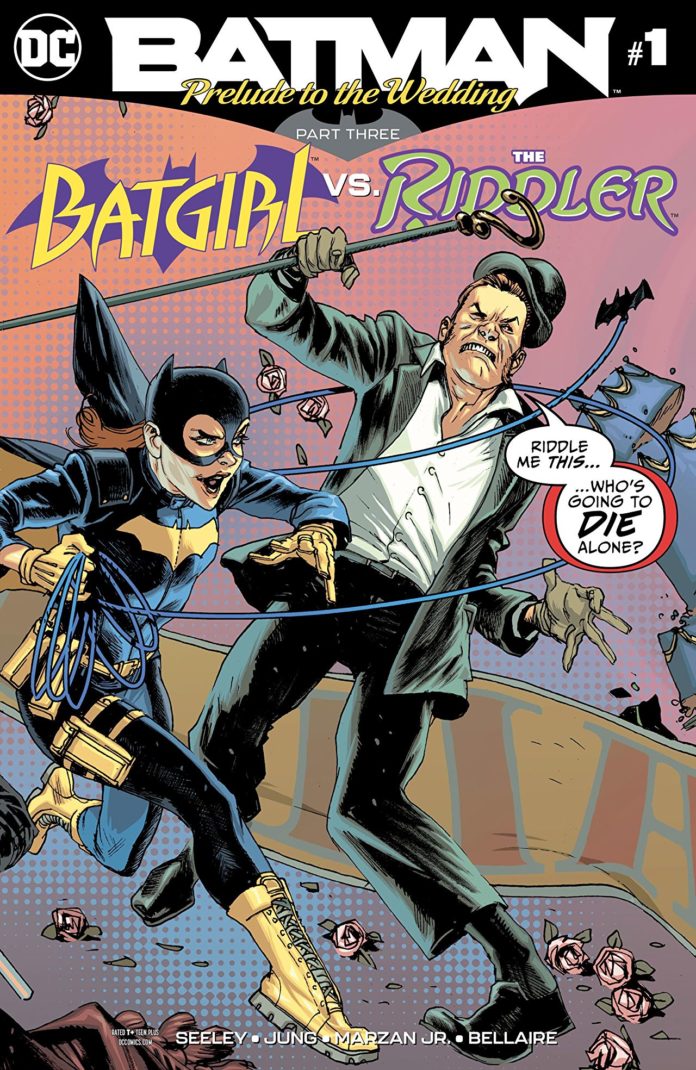 SYNOPSIS: On the eve of Batman’s wedding to Catwoman, two of Gotham City’s finest minds clash. In her role as Oracle, Barbara Gordon wired all of her allies together. But when The Riddler takes on Batgirl, will he tear everything asunder?

Here go, time for the third part, and I am not sure I am having fun with this build up to Batman #50.

These interactions with the Bat-Family and the rogues gallery are fun, yet forced. The problem with this Batgirl issue is, there are things alluded to that I have no idea about. I guess there is some kind of assumption that I am familiar with all of the goings on in the Bat-Family, but Barbara’s love life is not one of them. I get there has always been a thing with Dick, but it felt like a random conversation with the off screen Black Canary.

Moving on to the core of the story, I liked the cleverness of the riddles, but The Riddler had to know that once you solved 2 of them they were going to get easier to solve. The little things like them being analog were nice touches, a good counter to Batgirls skills set. I like that Batgirl has a rep on the streets at being super technical, so for The Riddler to attack that weakness (not really) was a good character beat. That being said, the way it plays out in the end did not work for me.

Since Rebirth, The Riddler has had an edge given to him which was not present here. He came off as a Lego video game version of the character. That is not necessarily bad, but compared to what Tom King built in the Batman book, this is watered down. Even more so this is an extension of the story King is telling. To hammer my point in more, the visuals were heavily influenced by The War of Jokes and Riddles representation by Mikel Janin. Tim Seeley is a good writer, so I am not taking digs. All of this could just be the assignment of tie in’s to a greater editorial call. It just does not feel as necessary as it’s being marketed.

As the book closes out, I do have some mild curiosity about what happens with Dick and Babs, but even that goes out the door with solicitations of another event book King is a part of. One final thing I will close with, Gordon has to never be this close to proximity to Batgirl. It’s his daughter and she is basically wearing a headband and some glasses. Gordon wears glasses, but come on friends!

So three parts in and this is C. It has some good bones, but it does not feel like necessary reading to lead up to Batman #50. – Justin Kowalski

THE BATMAN | “The Riddler” by Michael Giacchino