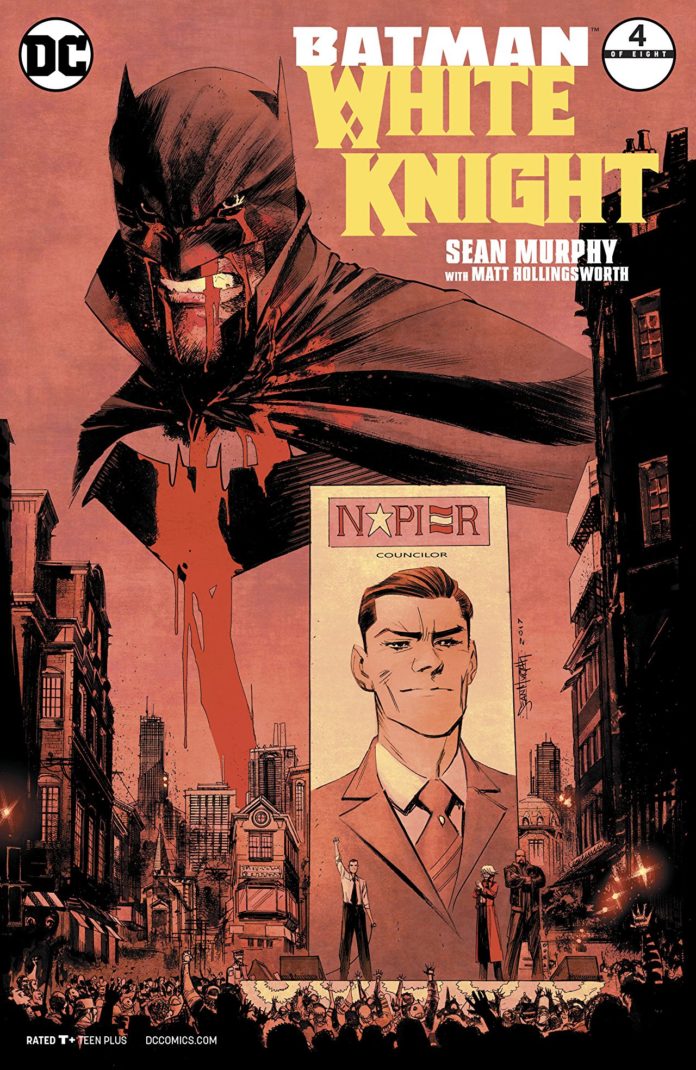 SYNOPSIS: Jim Gordon and the GCPD are thrown into disarray when Jack Napier leads a show stopping campaign to become councilman of the politically abandoned neighborhood of Backport. Civic backlash brews as Mayor Hill struggles to find creative ways of criminalizing Napier’s democratic aspirations, and Batman’s interference blooms into a liability for the GCPD’s public image. Through it all, the new Joker plots to derail everything—and new secrets about Harley’s past are revealed.

“Cut the crap Napier. I don’t care how many you scam, I know this is a long con.”

That sentence is mumbled by Commissioner Gordon in this month’s Batman: White Knight #4, and he’s speaking for all of us. Jack Napier, aka The Joker, is taking the right steps now but it’s only a matter of time until he slips up.

Sean Murphy continues to push Batman further from the heroic spotlight to make room for Napier. Duke Thomas is one of the former clown’s biggest supporters, helping him become the face of the forgotten Backport area, and announce Napier’s bid for city council. After a peaceful protest turns violent, the Dark Knight is blamed for the escalation and Napier surrenders peacefully. His end game? Create a Gotham Terrorist Oppression unit (GTO), combining Gotham’s finest with the city’s vigilantes. Batman isn’t fooled, but his allies are.

Not the most action-packed issue of this series, but Murphy continues to confront interesting issues and ideas. Napier’s motivations are eerily current with today’s times, but never comes off preachy or forced. Everything just snaps together and serves the story. There’s no doubt: Napier is the hero of this story, and Batman is the villain.

I’m also loving what Murphy’s doing with this Marian Drews, also known as the other Harley Quinn. We get a nice backstory in this issue, and she’s playing her part well in BWK. She represents the fandom who love the crazy Joker we’ve grown accustomed to and want him back. She also may be the only one figuring out what Napier is truly up to.

Murphy hits all the right notes yet again in Batman: White Knight #4. The drama escalates, the stakes are higher, and OUR hero is losing his support. And just when we think we have all of the cards for this hand, Murphy proves at issue’s end he has an ace up his sleeve.

I can’t wait for the next round. I know the Joker’s wild, but Sean Murphy…hit me.