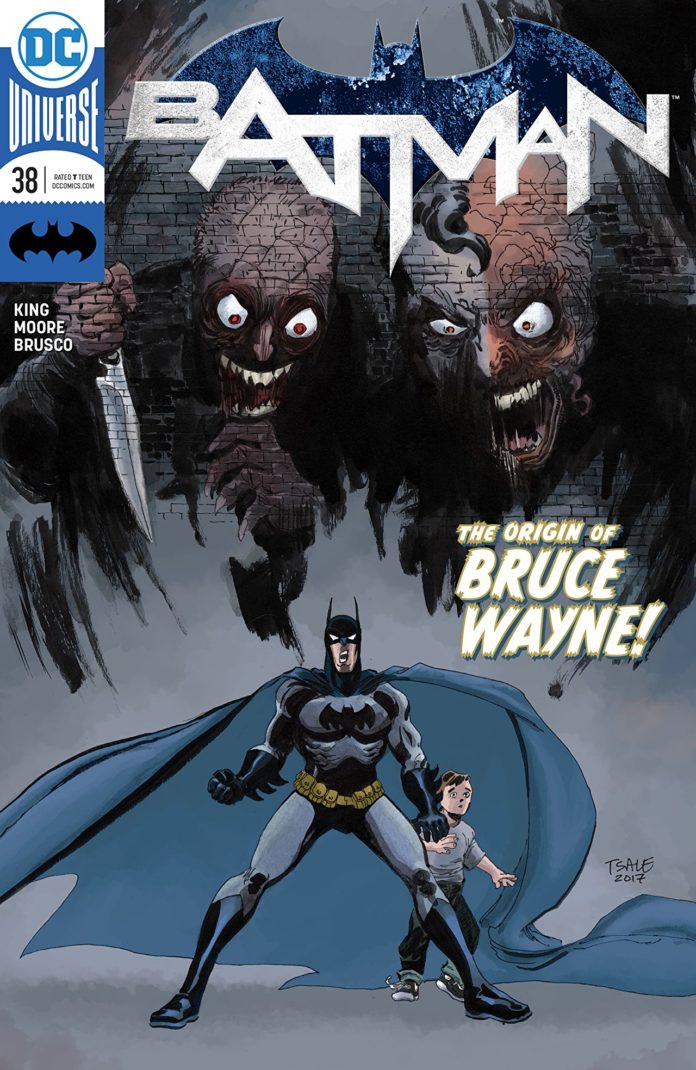 SYNOPSIS: “THE ORIGIN OF BRUCE WAYNE!” If Mattie could grow up to be anybody, he’d grow up millionaire playboy Bruce Wayne. But what would happen if he was forced to relive the worst tragedy of Bruce’s life and his parents were murdered? Batman’s hunt for the killer puts him face to face with a strange mirror version of his own past.

I’m a hopeless romantic, so I’ve loved what’s been happening lately in the pages of Tom King’s Batman. From Bruce Wayne’s proposal to Selina Kyle in issue #24 to their bedroom-bound bookends in “The War of Jokes and Riddles” (issues #25-32) to their globe-trotting tussle with Talia al Ghul (in issues #33-35) to a double date with Lois Lane and Clark Kent (in issues #36 and #37) to that incredible second annual, love has been in the air, on the rooftops, and everywhere else these lovely lovers have found themselves in Gotham City and beyond.

But if you’re feeling like Fred Savage in THE PRINCESS BRIDE and wondering if this title has turned into “a kissing book,” issue #38 — this title’s weirdest, most disturbing entry since the standalone Swamp Thing story back in issue #23 — will cure what ails you…or give you nightmares for a month.

It’s called “The Origin of Bruce Wayne,” and it’s not what you think. The rich parents of a boy named Matthew are brutally knifed to death, leaving him all alone with his faithful butler, Taylor. And because Matthew’s father worked with Bruce Wayne, Bruce arrives to offer solace, sympathy, and all-too-familiar empathy. Batman, meanwhile, visits Arkham Asylum with Gordon for a chat with Victor Zsasz.

The details King crams into the detective work here are clever, exciting, and original. Gordon chides Batman for thinking that Batman could outsmart Batman, and Batman replies in a way that’s utterly…Batman. (That’ll make sense when you read it.) New clues lead Bruce to consider other suspects. Did Two-Face frame Zsasz? Did the (other) butler do it? The murderer is much easier to digest than the motive, leading to a final line that lingers and haunts long after you’ve closed the book.

Selina does make a couple of quick appearances, and there’s a lovely sweetness to how a sleepless Bruce thinks out loud to his slumbering fiancée. Giulia Brusco’s colors alternate between warm and cold over Travis Moore’s pencils and inks, with the art team masterfully making equal time for atmosphere and emotion at every turn.

Tom King’s take on BATMAN has been endlessly heroic and romantic in every sense of the word, but this story reminds me more of another writerly King who capably plumbs the darkest depths in wildly wicked ways. It’s an excellent issue that’s worth the price for the detective work alone. – John Bierly

Robert Pattinson as Batman in EARTH ONE Batsuit