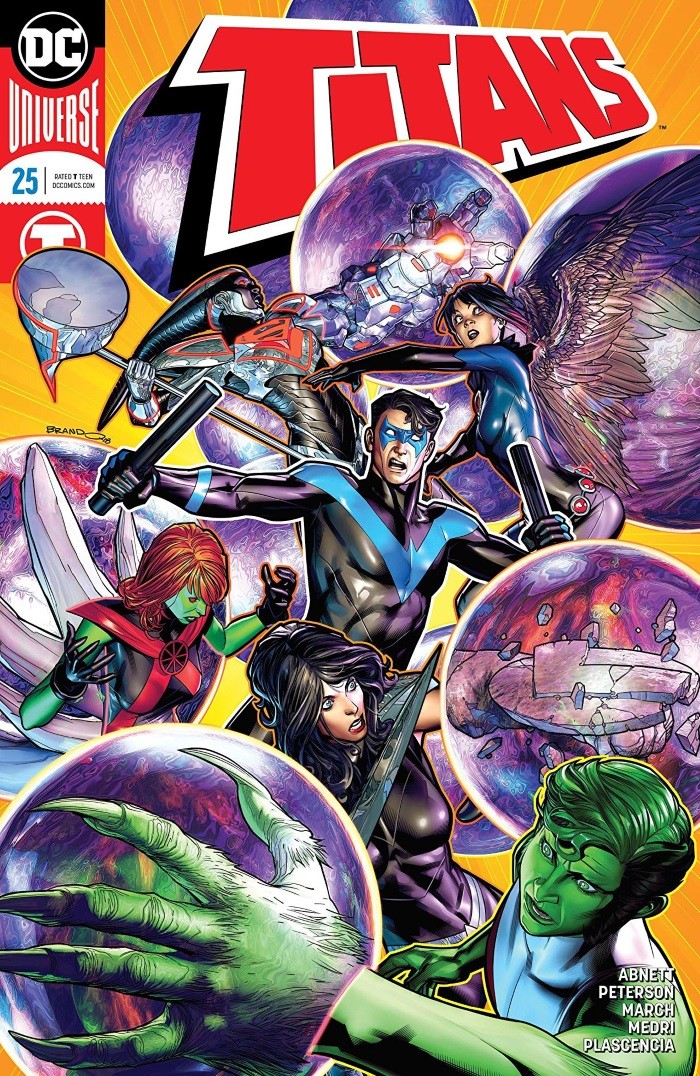 SYNOPSIS: The Titans split into three separate squads to combat the growing Source Wall Event threat in this anniversary issue! As Raven, Steel and Beast Boy contain an alien-robot outbreak, and Donna Troy tracks down the Blood Cult, who claim to have knowledge of why the Source Wall cracked, Nightwing and Miss Martian are fighting each other while also fighting for survival against a new metahuman threat with a penchant for creating pocket dimensions. Can Dick and M’gann put aside their differences, or will her terrible secret derail the whole thing before they resolve anything?

“The Spark” is the third part of the opening arc of the newest incarnation of the Titans. Calling it the third part of one story arc is a bit generous. There has not be one singular story flowing through three issues, but a series of small stories built to establish the mission of these Titans. So, of course the team bonding that slowly forms for the new group, is front and center, along with exploring the fallen emergent energy.

Last month, my complaint was that Titans didn’t give every character enough to do. I do stick with that though when reading as single issues, but as an arc, it becomes clear the goal was to highlight them all over the course of the entire story. This month, Steel got much needed time to shine.

For Steel, it was all about showing that she is the tech genius of the team, and a physical powerhouse to boot. It was good to see her breaking down the situation and looking for the solution (all while single handedly destroying a monster robot), but that was all there was to her. Her personality didn’t shine through like some of the other characters. I know we will probably get more of her as this story goes along, but it continues to stand out when she’s used solo as tech genius.

I must say, dealing with Raven was one of the main reason I wanted to catch up with this book. Last issue, she was stuck on Unearth, and it seemed that Seneschal had taken her place and left her stranded. However, that is all in doubt now. Raven appears to be herself, and present in battle with the mechanoid, however she doesn’t have access to her full power. I thought we were headed to an imposter being on the team, and that could still be the case, but this has given me something else to think about. Seneschal was not seen in this issue,  so it may be possible that he is posing as Raven. The loss of soul could be his cover for lacking Raven’s power. This is could evolve into a nice story to test our team.

I knew Nightwing and Miss Martian would have to pair off at some point, but having them get stuck in TV land was a fun bit. The conflict has been Nightwing’s reluctance to accept Miss Martian on the team, and her annoyance with it, so it makes sense to put them together It’s an old troupe but that means it works. It was enhanced by alternating their personality with the characters they were zapped into. That brought out the underlying tension that Richard Grayson is all too familiar with (the way his life goes, there’s more than one reason for his nickname).

All in all another slightly above average issue. So far, this book has done a good job of building for the future (Seneschal, Mother Blood is coming), but it is still finding its footing with juggling the characters and the monster of the week feel. Hopefully the latter is coming to an end soon. TV Land with Dick and M’gann was enough to nudge this one up a bit. – E. Chad Metz