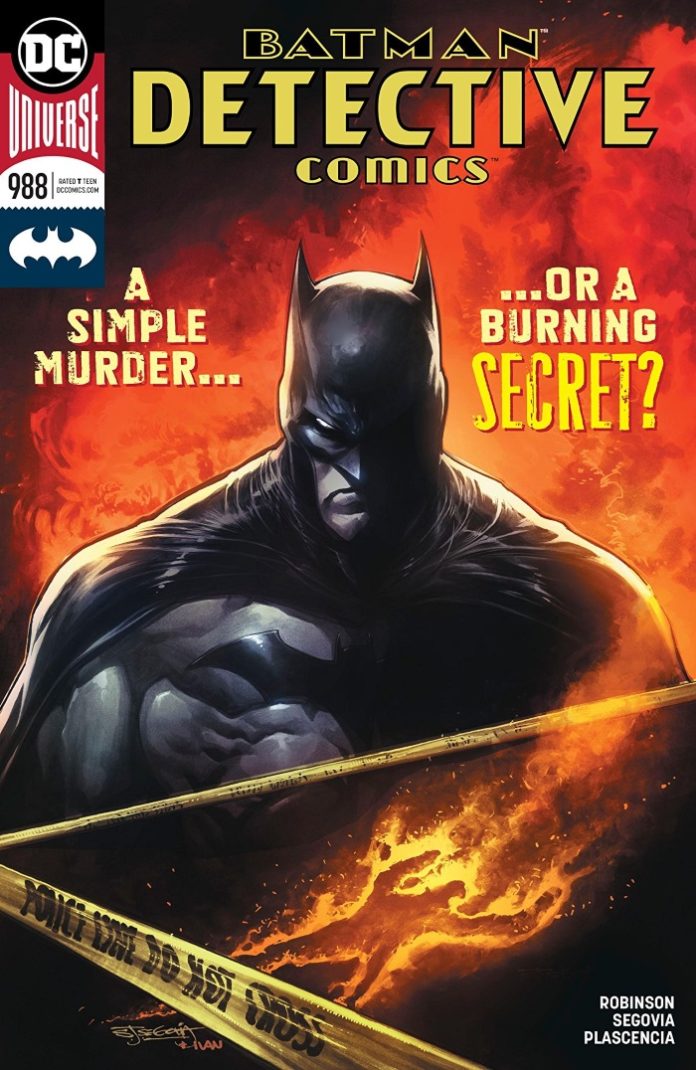 SYNOPSIS: Kicking off an arc guest-written by James Robinson (writer of the Batman classics “Blades” and “Face the Face”) with art by rising star Stephen Segovia! It looks like the kind of murder case too ordinary to draw the attention of Batman…but once the World’s Greatest Detective gets involved, the identity of the victim completely unravels—and leads to a conspiracy among some of the Dark Knight’s strangest foes!

Here we are again; just as a new writer comes in they are out just as fast. Bryan E. Hill is now off prepping Batman and the Outsiders for release this December, leaving the readers of Detective Comics in the amazing hands of James Robinson! This isn’t Robinson’s first stay in Gotham and I welcome him back with open arms.  In his first issue back it sure looks like he is putting the detective back in Detective Comics!

Robinson starts off the book in captivating fashion just like any good Bat-book should. Batman and Gordon are investigating a crime scene, a murder scene.  Robinson sets the tone early that this is going to be a detective story, a mystery worthy of the world’s greatest.  Robinson addresses subtly how the recent events in both Detective Comics and Tom King’s Batman run have affected The Dark Knight.  Robinson’s dialogue is so remarkable to read. It’s exactly how I envision Batman speaking to/with Gordon or Alfred. His actions and the motives that drive him are not lost on Robinson.

“Bottom line: there is a mystery and I am a Detective.”

He understands Batman and you can feel it with every speech bubble. It only gets better with every page. The banter between Batman and Alfred investigating the case is a prime example.  That dry English wit gets me every time; it’s just as good as what Christopher Priest delivered in the recent Deathstroke vs Batman arc (Deathstroke #30-35, which I reviewed for BOF as well).

Stephen Segovia provides the interior artwork for the issue.  This book is gorgeous. The first page—a splash page of Batman and Gordon—is damn near perfect, capturing things like Batman’s stoic pose and Gordon lighting his pipe as they look down at the deceased. Let’s be honest: it does not get more Batman than that. Segovia perfectly renders beautiful Gotham skylines with a gliding Batman into the night…I can go on and on.  I haven’t enjoyed a book of Detective this much since Carmen Carnero or Eddy Barrows from James Tynion’s run. It’s just a fantastic book to flip through. The digital readers will have no shortage of lock screens to choose from; there’s tons of poster material on display here.

Overall, this was a fantastic issue of Detective Comics. James Robinson is taking the title back to its roots: solo detective centered mysteries. As much as I have enjoyed the team-up book Detective Comics became I can’t tell you how exciting it is to get this kind of story.  Robinson gives us a great intro issue into his story and with him teamed up with a great artistic team of Stephen Segovia drawing and Ivan Plascenia coloring, Gotham City and Batman have not looked better since the start of DC Rebirth.  If you have not been reading Detective Comics pick up this issue! This is a must have for your pull list this week. This is old school Batman at its finest! – Pete Verra