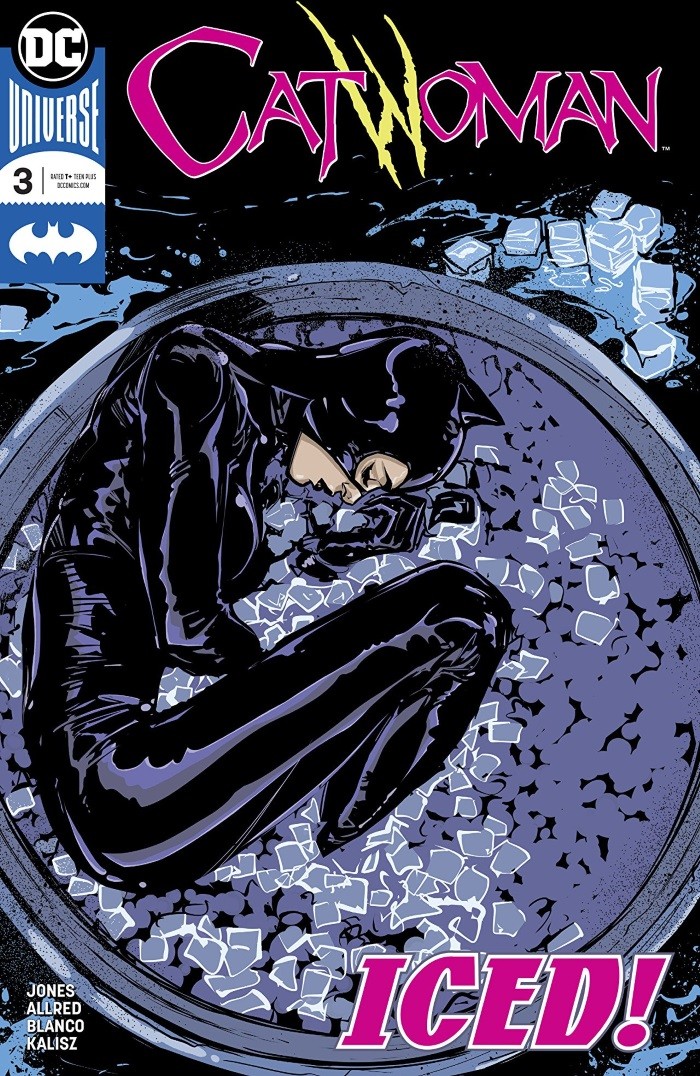 SYNOPSIS: The secret shot-caller who’s been borrowing Catwoman’s M.O. for a series of crimes steps out of the shadows in this issue, and her “secret origin” is unlike anything Selina’s run into before! Meanwhile, the police close in on Catwoman as well, as they believe she killed a cop during one of the crimes she’s been framed for. With nowhere to go and no one to turn to, Catwoman’s running out of her nine lives fast!

She’s dressed classy, but the cat is still sassy.

Picking up right where we left off a month ago, Selina has cautiously attended an impressive gala and comes face-to-face with a detective who has her in his sights. The gala quickly escalates into a fight club, and Selina takes a nasty fall, not landing on her feet. Meanwhile, the mysterious and grotesque villain of this book tells her origin story. And it’s just as messed up as her face.

Catwoman #3 was a little slower than the first two issues. That doesn’t mean it isn’t good, it’s just taking its time. I’m a little confused at some of the story building here, as well as the connections. While the detective at the gala thinks Selina killed a local cop, I don’t understand why he gives everyone a shot of Bane juice? Maybe I’m missing something? I know our gross new villain is connected to the fake catwomen, but don’t get the connection yet? Maybe I need to read all 3 issues in one sitting and it’ll be clear.

These are just some minor things. Overall, I think Joelle Jones mostly keeps the book chugging along. She simply knows Selina Kyle. Even out of the suit, the femme fatale glows in each panel, and her dialogue is silky smooth like her dress. She may have gotten her ass kicked at the gala, but the cat still has her claws.

I’m also not one that needs to know origins of a villain, but this issue’s worked wonderfully. I can’t remember her name, so I’ll continue to call her the grotesque one. But she monologues her past to her husband, and it can sound simple enough and plague her as this innocent lady. But the panels show us another side, and this woman keeps getting more evil. Especially when she’s done with her story. Also for the flashback, we get a switch in the art but it doesn’t retract or distract, but adds another layer to the issue.

Catwoman #3 helps the title move along, even if it slows up a little bit. I can appreciate it, as Joelle Jones knows what she wants to do with her title character. It seems like we’re getting a slow-building story, that will come together for an exciting main event. Recommended. – Ryan Lower