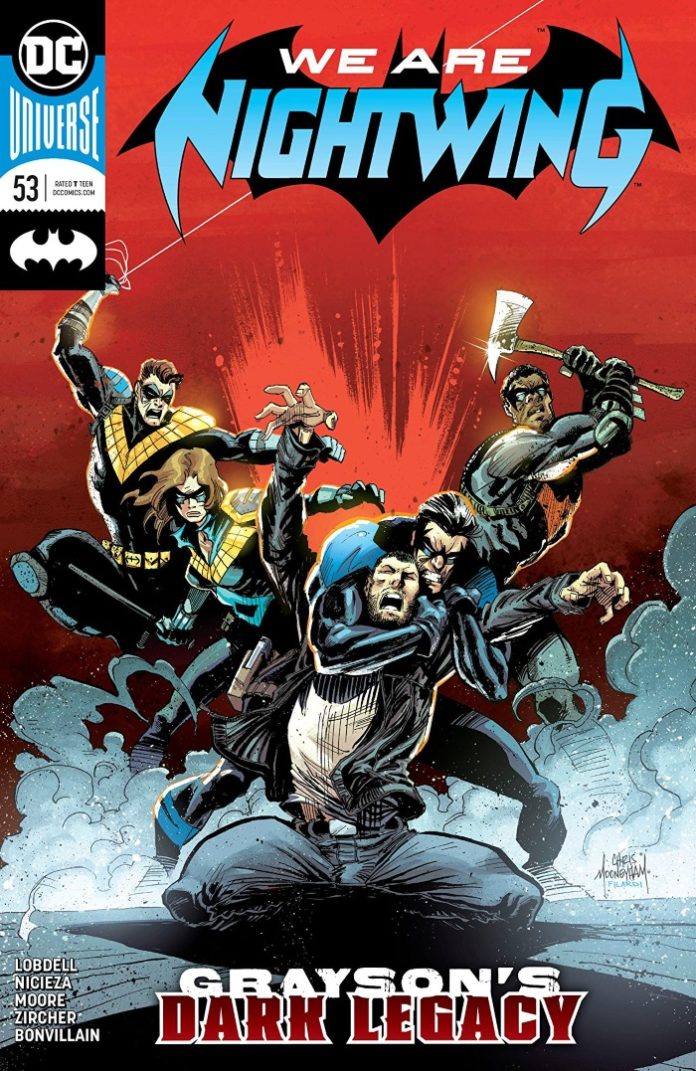 SYNOPSIS: Who is Dick Grayson? That’s the question haunting him after the devastating injury he suffered in Batman #55. Now, as he continues to struggle physically and emotionally, how can he stand against the terrifying “fear germ” unleashed by the Scarecrow?

There’s a beautiful moment at the beginning of Geoff Johns’ BATMAN: EARTH ONE where Batman, new to the vigilante nightlife, tries to take down a criminal with his grapple gun. He pulls the trigger and the thing malfunctions with the rope going everywhere except where it needs to go.

Batman didn’t have much luck that night. As it happens, being a vigilante capable of breaking through a skylight and engaging multiple bad guys takes practice.

Our new Nightwing, Detective Alphonse “Sap” Sapienza, discovers this very quickly in the latest issue of the series. I was wondering if Sap would end up being a brutal, Punisher-type version of Nightwing. The way he was drawn at least made me think that’s where they were going with the character.

Sap may still end up like that but I appreciate that his debut didn’t go so smoothly. In fact, to put it plainly he fell flat on his ass and barely endured his first adventure in crime fighting. My expectations were subverted in a good way here.

I was not all too pleased that the first line of this issue was, “My name is Ric Grayson.” I suppose it’s become a DC novelty to begin your story by stating your main character’s name (“My name is Oliver Queen,” “My name is Barry Allen,” etc.). But maybe this is writers Scott Lobdell and Fabian Nicieza’s way of making Dick Grayson’s recent name change stand out in a playful way. If so, I can respect that.

Anywho, Ric is more than content as he meets a new potential love interest and enjoys a burrito date topped off with a few hours of pleasant conversation. His nightmares/flashbacks have subsided and with a new Nightwing appearing Ric thinks he has one less problem to deal with.

Meanwhile, a walking nightmare named Scarecrow crashes another gathering and monologues. I’m starting to get a little impatient with the Scarecrow’s appearances. He made a great impression in NIGHTWING #50, albeit mostly in a flashback sequence, and I said in my last review that I can’t wait to learn what his plan is.

Well, beyond scaring the bejesus out of people, I’m still waiting for some hint as to what his scheme will be.

On a final note, Vicki Vale reappears in the pages of NIGHTWING for the first time since her capture by the Dark Web during Benjamin Percy’s run on the series. Still no idea how that storyline resolved itself. She’s simply shown reporting the news as always. I ran a quick search hoping to see if any other character had rescued her and came up dry.

If you have any information regarding the how the rescue of Vicki Vale played out please let me know. – James Armstrong