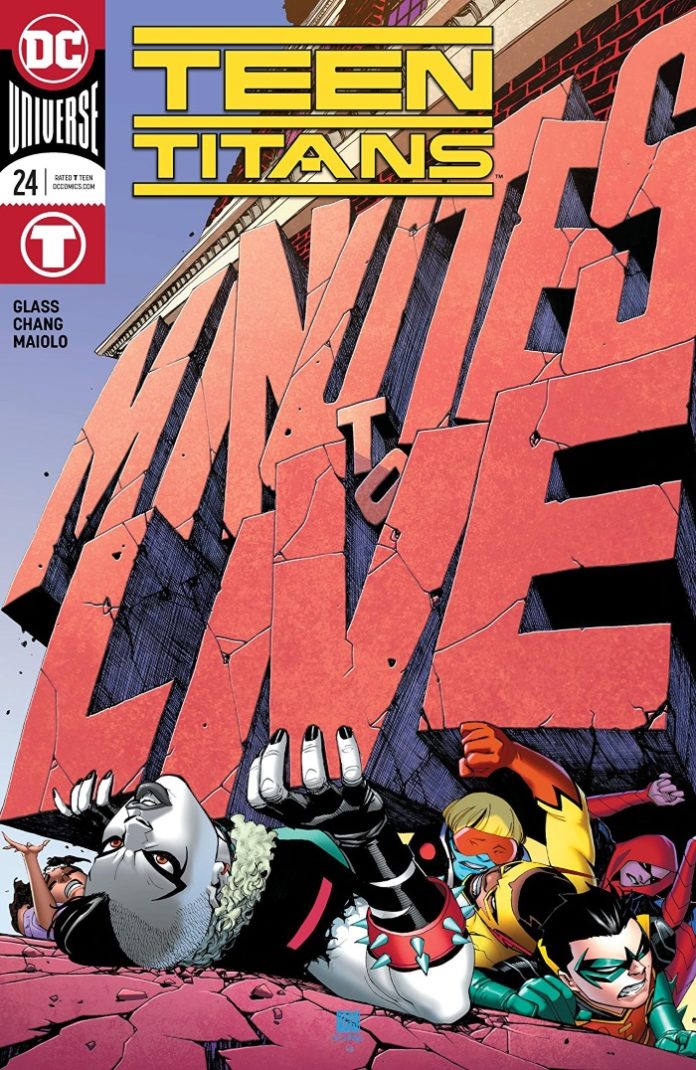 SYNOPSIS: The Teen Titans bring the house down in this issue—and it just might crush them to death! Set up by the mysterious villain known as the Other, the Teen Titans find themselves trapped beneath a crumbling building. The only thing between them and a dirt nap: Crush’s bench-pressing the entire complex. But how long can she hold out? The Titans race the clock against gravity, muscle fatigue and getting squashed like a bug. Plus, Damian’s secret mentor is revealed, and Robin realizes there’s a traitor in their midst!

Issue #24 of Teen Titans opens directly following the events of issue #23. The team finds themselves at the bottom of a collapsed building after its destruction at the hands of The Other. Only Crush is keeping the team away from certain death by holding up a section of the rubble. Some of the Teen Titans are out of commission and the rest are working together efficiently to quickly come up with a plan to get to safety.

Just kidding. They are actually taking their precious remaining moments to argue with one another and (again) fail to work as a team. Again.

At the last moment, after Robin is unwilling to call in back up from the Justice League and Djinn gives a vague and mysterious rationale for being unable to use her magic to help, the team comes up with an escape plan that blasts them into the sewers below.

Writer Adam Glass has been beating the reader over the head with the point that this team is dysfunctional and barely staying together for issue after issue. They don’t follow orders. They place blame on one another, They have a complete lack of internal trust. They can’t get out of their own way. They go back to Teen Titans base camp and continue to argue/aggressively confront one another.

It’s not exactly an original thought to say superhero comics are a storytelling medium that requires a suspension of disbelief. We are willing and eager to see the tales of super-powered individuals doing larger than life feats in otherworldly situations. When a comic story fails, these things aren’t the problem, it’s when the characters motivations and action don’t unfold in realistic manners that were brought out of the story.

This book is failing and it’s a real bummer. Now, there are readers, that aren’t enjoying this run, who don’t like what Glass is trying to do with the team, but I think the issue is actually a bit different. The concept of a dysfunctional team is not a bad one, but the execution truly is. There is a world where this book is telling the same story, but it does a better job leading the reader to assess the team’s weaknesses instead of being constantly beaten over the head with them.

Glass is trying to further illustrate the strained dynamics of these team using a high stake setting to illuminate just how big of a problem their fractured relationships are. Instead, any tension falls flat because their choices are so unrealistic (and so annoying) that it never has a chance to take hold on the reader. Pacing issues don’t help, but the core problem of this issue is that so much time is wasted on impressions that have already been made over and over again.

More frustrating is that there are moments that genuinely land. The book ends on a high note with a scene back at Teen Titans HQ as the team gets cleaned up from a tidal wave a sewage (another miss, as the art is incredibly vague and confusing as to what actually happened to them once they landed in the sewer, let alone how they made their way out.) Red Arrow goes to confront Djinn as to why she refused to magically help the team. In a dark and dramatic turn, Arrow gets more than she was planning for in a cool scene that leaves the reader in awe of Djinn’s power and a bit unnerved as to her true nature.

If Glass and artist Bernard Chang did more of these scenes, and less of just about everything else, we’d have a solid book worth looking ahead to each month. One has to wonder why editor Alex Antone has not stepped in more on the direction that this title is headed and pushed the team to play to their strengths.

Outside of the odd missing wave of waste, the art in the book is solid. Chang’s style fits these characters well and, more impressively, he draws these characters more like actual teens than we’re used to seeing. Some of his panel work is a bit hard to follow, which compound some of the pacing issues the book has.

Overall, there isn’t enough here to justify purchasing Teen Titans to anyone but diehard fans of Robin, Kid Flash, and Red Arrow. The new characters are not developed enough (outside of Djinn, for whom the book is sorely in need of more.) The less said about the mentioned-but-never-seen big bad The Other, the better. I guess I could say I’m interested in seeing where Glass takes some hints about Roundhouse not wanting to ever take off his suit, but that’s a bit of a stretch.

Things need to get better…in a hurry. – Garret Grev