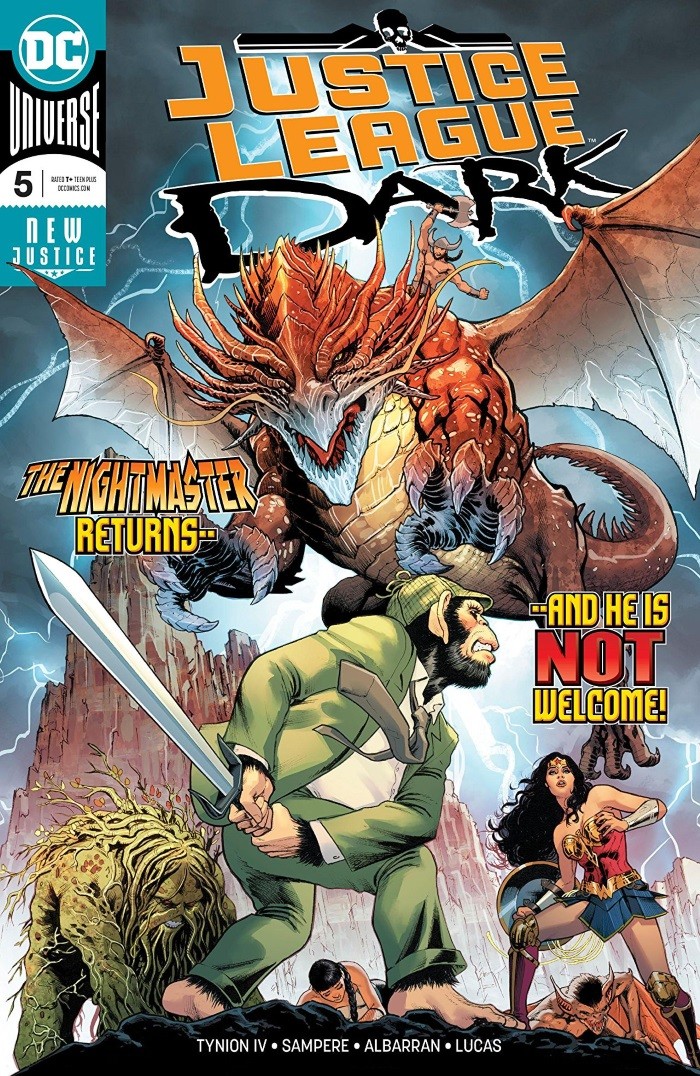 SYNOPSIS: Wonder Woman’s magic act…banned! The DCU’s magical community collectively freaks out and forbids Wonder Woman and the JL Dark team from meddling in magic anymore after the disastrous events of the “Witching Hour” storyline. The team seeks refuge in the only place they can think of: Detective Chimp’s inherited, magical realm of Myrra—but not everyone is happy to bow to the new Nightmaster! So how can things get worse for the sorcery super-team? One word: dragons!

“The Witching Hour” storyline is over (hooray, because it was awful), and writer James Tynion IV is back to usher us into the next chapter of his lackluster take on the Justice League Dark.

Here’s the thing: maybe if you really love these characters, you will get something out of the story (maybe), but if you’re a newcomer diving into this world for the first time, Tynion gives you almost nothing to hold onto.  These characters have the capacity to be deep and well-rounded, but they are robbed of these traits entirely because nearly every word out of their mouths is exposition.  Tynion has a perpetual commentary running, and it drains every drop of life out of what he is trying to create.

And what ends up happening is that even when something interesting actually does take place, it’s surrounded by so much drudgery, it’s nearly impossible to care.  For instance: Wonder Woman rides and slays a dragon in this issue while the rest of the team fends off an army of the undead.  Now this should be an interesting event, but the dullness that pervades the rest of Tynion’s offering is so profound, it muffles all possible intrigue.

So we already know that Tynion isn’t holding up his end of the bargain as a writer, but the biggest loss comes in the art department.  Gone are the dynamic layouts, rich textures, and moody colors of artist Alvaro Martínez Bueno and colorist Brad Anderson.  Penciller Daniel Sampere and colorist Adriano Lucas have stepped in to fill their mighty big shoes… and the results are merely adequate.  If you flip through the book casually, you may notice a couple interesting panels, but overall, the book has a rather generic feel to it.  At least before, you could pick up this book to admire the pristine artwork; now (and it really does sadden me to say this)… I’m not sure why you should bother picking up this title at all.

There’s just nothing compelling going on here.  Tynion is building a lifeless, aimless story.  If I wasn’t reviewing this book, I certainly wouldn’t be taking the time to purchase and read it.

I suggest you do the same and give this one a pass.  There’s other, much better, fare out there. – John Funderburg