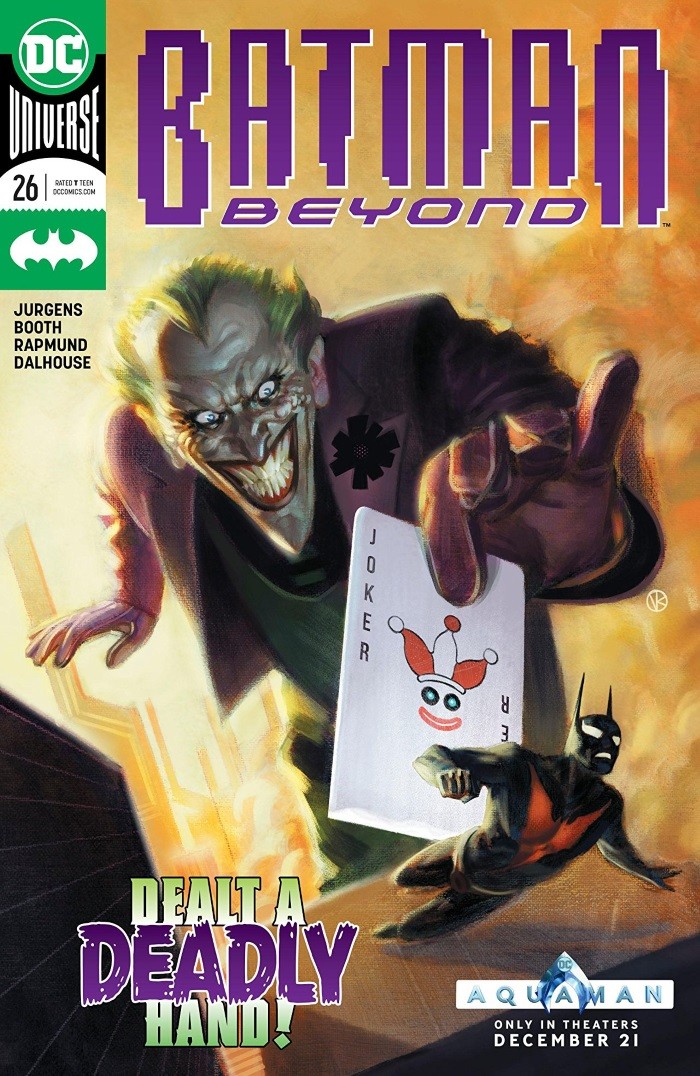 SYNOPSIS: The Joker’s back—and he wants to turn Batman and Robin into a punchline once and for all! The original Clown Prince of Crime returns to stalk Neo-Gotham in part two of “The Final Joke”! Can you guess what happens when he encounters Barbara Gordon for the first time in decades? And when Robin gets caught on a video feed for the first time, no one’s more delighted than The Joker.

The Ace of Knaves.

The Clown Prince of Crime.

The Harlequin of Hate.

The Jester of Genocide.

Whatever title you prefer, The Joker is back!

The real Joker–no fakers this time–and the conclusion of our last issue featured a fantastic homage to the seminal work, THE KILLING JOKE, with Barbara Gordon staring down the barrel of a gun wielded by a floral shirt clad, albeit aged, Joker.

I think Dan Jurgens is stepping up his writing in this arc and is giving more dimension to our main characters.

Matt is still discovering and honing his abilities as Robin, while Terry is realizing that he’s been neglecting half of Neo-Gotham. There’s a nice part of the story that showcases Terry’s dedication to saving the people of Gotham from crumbling rubble and pushing himself and his suit to the brink of its capabilities. Matt is really coming into his own as the new Robin as well. No longer is he the hyper-exuberant fanboy that he was when he took on the mantle; he now seems to realize that he has a job and a purpose and that lives depend on his success at that job.

There’s still a little bit of that awestruck kid in there as he’s discovering his own suit’s capabilities, which keeps him from being a carbon copy of his older brother.

The tension between Dick (or is it Ric?) Grayson and Bruce continues in this issue, with Dick’s discovery of a new Robin being the point of contention. This interaction, much like the previous ones between Bruce and Jack Ryder, can make for some very good drama if Jurgens chooses to pursue it.

The new artists in this issue — Norm Rapmund and Brett Booth — did a great job. All the art is clean and crisp and the character designs have remained fairly consistent from the previous issues. My only complaint is that The Joker is looking a bit younger than he did in the last issue. Gone are the deep smile lines, which I think lessens the creepy factor. There were a couple of panels where his eyes are the focus, and they’re drawn extremely well, with The Joker’s expressive, manic glee showing through.

Coming off of the greatness of the last issue, there wasn’t really a drop off with this one. The focus stays centered on the characters that it should — Terry and Matt — as opposed to Bruce, which Mr. Jurgens has had a habit of fixating on. – Matt Whaley