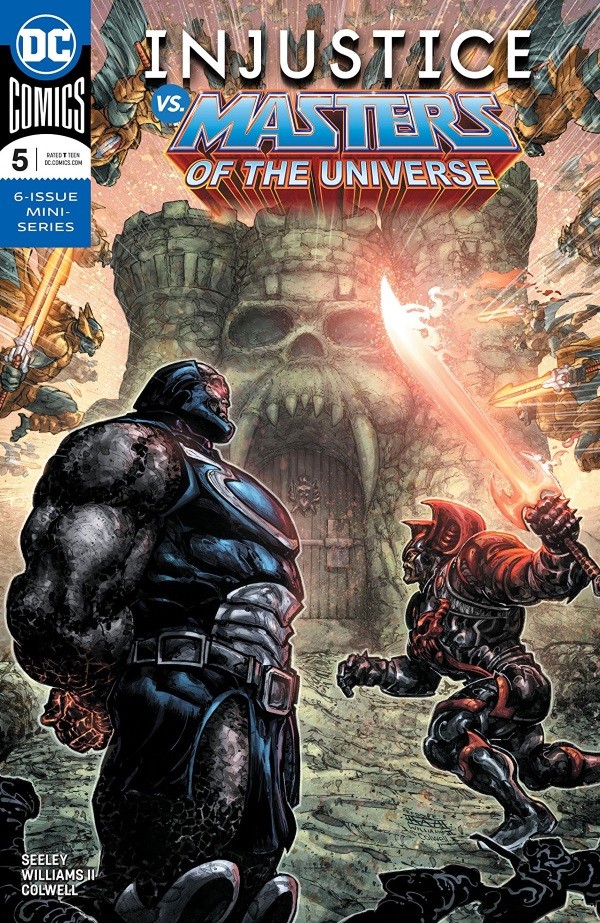 SYNOPSIS: Betrayed by Skeletor and fearing the power Darkseid gained in his attack on Castle Grayskull, Superman takes up arms with his old compatriots. But will their combined might be enough to win a battle against a foe armed with the Anti-Life Equation?

Wow. What an issue. What a series!

Issue #5 of Injustice vs. Masters of the Universe is a pulse-pounding thrill ride from start to finish. It’s almost hard to believe that this is the same series that struggled under the weight of world building and exposition a mere 5 issues ago!

The issue opens in Metropolis at Superman’s headquarters, as the Man of Steel is about to execute a powerless Prince Adam following the destruction of the Spirit of Grayskull in issue #4. At the final moment, a telepathic message from the Sorceress tells Adam of Darkseid’s war on Eternia and possession of the Anti-Life equation, a threat big enough to stay Superman’s hand and form an uneasy alliance between Batman, Superman, and Adam. Batman and Superman agree to turn their attention back to one another after the threat is taken care of.  Wonder Woman was mortally wounded after murdering Damian Wayne and Batman, desiring her survival to meet his justice, suggests sending her to the Phantom Zone to avoid death and retrieving an imprisoned Supergirl to aid in their battle.

Back on Eternia, Skeletor uses his newly forged power sword imbued with the power of SHAZAM to attack Darkseid and gain sole control over Grayskull and the entire planet. At the same time, Evil Lynn turns on the New Gods and uses her necromancer skills to gain power over the parademons. While Evil Lynn is successful in her betrayal, the Evil Warriors now have to face down Batman, Supergirl, and the rest of the DC heroes and Heroic Masters (plus a mysterious new development in The Green serving to power up Swamp Thing and Moss Man.) Skeletor also has his hands full in his battle, despite wielding the Power of SHAZAM, only surviving Darkseid’s attack thanks to Superman’s well-timed arrival.

I won’t spoil them here, but the issue serves up at least two major deaths as it comes to its conclusion. Neither of them feels gimmicky, although a betting man would wager that they won’t be permanent. The issue ends with a victorious Superman, wielding the Power Sword, Orb of Power, and Spirit of Grayskull, making a bold proclamation that I cannot wait to see unfold in the miniseries’s final issue next month.

Tim Seeley has done a masterful job creating genuine universe level stakes in a way that few crossover titles are able to do. The very nature of life itself hangs in the balance and the story behind why is well reasoned and springs from the characters themselves, rather than having them feel like mere tools used to tell a preconceived story. Even more impressive is the way Seeley is able to continually interject moments of humor or fan service without taking the reader out of the story itself. Whether it’s Orko saying a classic line from Batman: The Animated Series or a call back to confusion around Teela/The Goddess from the very early days of MOTU, there is plenty here to have fun with even in an issue that serves as the climax of the series.

The artwork on this book continues to be gorgeous, and if you’ve read my previous reviews there isn’t much more than I can say here. Freddie Williams II is such a unique and talented comic book artist that he deftly handles a storyline that moves at record speeds almost effortlessly. There may be a panel or two that will make the reader pause a moment to ensure they grasp exactly what actions are taking place, but the work is more than commendable. Where his cartoony style hasn’t always served character expressions the best in previous work, they are all on display in this issue and the emotions play very well.

I don’t believe I’ve given enough praise to colorist Jeremy Colwell over the course of this series. I’ve mentioned it previously, but the depth used here, along with the bursts of light and energy that crackle on the page, create a fantastic dynamic that really enhances the storytelling.